While Kansas missed the worst of the first major snow storm of the season on October 4th and 5th, the Northwestern Division had snowfall amounts of up to 6 inches for the month. Even the eastern portions of the state had snowflakes, but accumulations in this area were generally less than an inch.

Statewide, the average temperature was just slightly cooler than average. All divisions reported lows in the low to mid 20s, marking the end of the growing season for spring-planted crops. Winter wheat planting and emergence is close to last year at 94 percent planted and 74 percent emerged. Condition of the wheat crop was reported at 59 percent good to excellent this year, in contrast to last year where only 37 percent of the crop was in good to excellent condition at the end of October.

The continued moisture allowed for normal conditions to remain on the Drought Monitor in the Central Division, with some improvements in the eastern divisions where abnormally dry conditions persist. There has been little change in the western divisions, as rainfall for the year continues to be well below average. Cooler-than-average temperatures have somewhat reduced the negative impact of the below-average rainfall, but severe to extreme drought conditions remain throughout the western region. Both the Seasonal Drought Outlook and the Monthly Drought Outlook suggest continued improvement on the eastern edges of the drought region. The Seasonal Drought Outlook and the monthly outlook for November call for continuing drought in the western third of the state. Given the fact that we are moving into the drier part of the year, even normal precipitation will have minimal impact on the long term deficits in the region. The El Niño/Southern Oscillation (ENSO) is expected to remain neutral through the winter. For November, the temperature outlook is neutral. 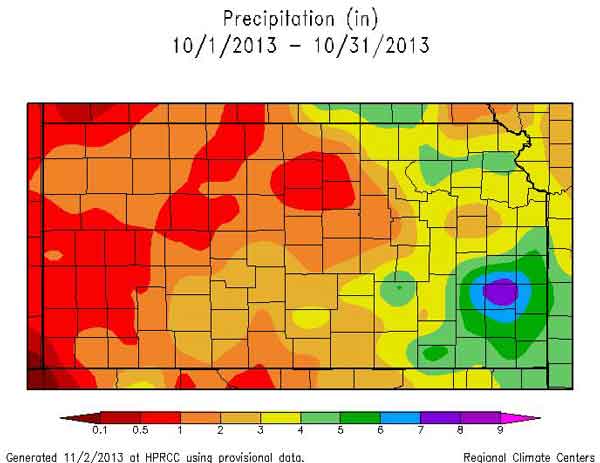 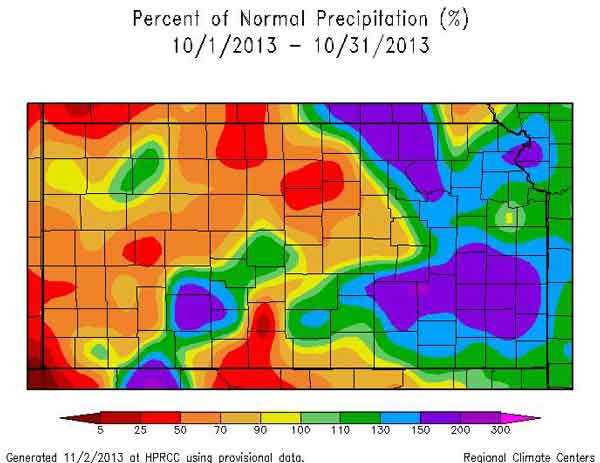