The growth stage of wheat in Kansas ranges from tillering in the northwest to jointing in the southeast and south central regions of the state. The development of the crop is 2-3 weeks behind schedule for this time of year. Dry soil conditions and thin stands continue to threaten yield potential and remain the primary concern for many wheat growers in Kansas.

There are no reports of leaf rust, stripe rust, or stem rust to date in Kansas (Figure below). Dry conditions appear to be holding rust and other fungal diseases in check in Kansas for now. Wheat soilborne mosaic was reported in a few fields in south central Kansas and in research plots near Manhattan. The symptoms of this disease often fade quickly as temperature warm. Only trace levels of powdery mildew and tan spot have been reported to date in Kansas. 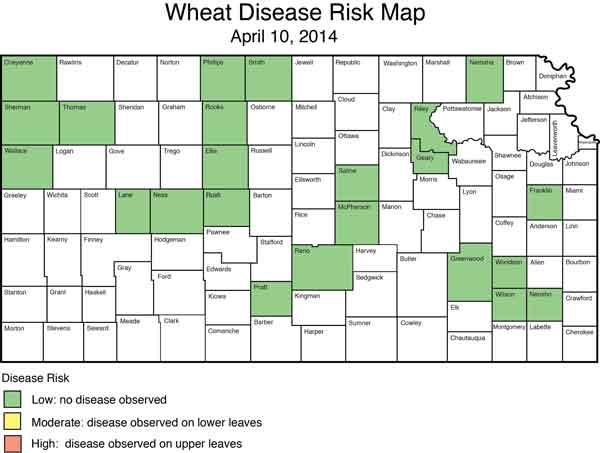 Reports from other states

Oklahoma. Bob Hunger, Extension plant pathologist for Oklahoma State University reports that rust has not been reported in Oklahoma to date. He reports that low levels of powdery mildew and tan spot were present in some fields.

Texas. In Texas, Amir Ibrahim, Texas A&M wheat breeder, reports that leaf rust and stripe rust continued to develop in irrigated research plots near San Antonio. He noted that the races of stripe rust present at this location were able to cause disease on Armour and Everest. The races of stripe rust able to overcome the Yr17 resistance present in many varieties with a Jagger pedigree (Fuller, Overley, Jagalene, PostRock) were rare or absent. Ron French, Texas A&M Extension plant pathologist, reports that rust was not present in commercial fields in north central Texas. However, he mentioned that stripe rust and leaf rust were present in commercial wheat fields south of Dallas in Waxahachie (Ellis County) and in Bastrop and Travis counties, which are east of Austin. He reports that Greer and Cedar were being affected by leaf rust. French indicates that temperature and moisture conditions in the Texas High Plains are not conducive for major disease epidemic.

The current status of disease and dry weather suggests the risk of severe fungal diseases is currently low in Kansas. Clearly, the crop has a long way to go at this time. The delayed growth and development of the crop may increase the chances that leaf rust could arrive in time to cause damage. Producers should keep an eye on what is happening in Texas and Oklahoma. Locally, producers should be checking their fields for symptoms of disease more frequently as the crop approaches flag leaf emergence.