Factors involved in winter survival of canola in Kansas

Winter survival of canola in Kansas is a complicated issue. Winter stand losses can be caused by one or more abiotic and biotic stresses, including poor plant establishment, low temperatures, wind desiccation, dry soils, soil heaving, and damage by diseases and pests. A cultivar’s freezing tolerance, its ability to cold harden, and its interaction with the environment ultimately determine whether a crop will survive the winter.

Using good farming practices is the best way to insure the survival of a winter hardy canola variety. Canola that is planted on time and in adequate soil moisture has the greatest potential. Six to 8 true leaves and 6 to 12 inches of fall growth should be present prior to winter dormancy. The dormancy period is when winter canola is most tolerant to cold temperatures. During this stage, the rosette should be at the soil surface with no visible stem elongation. A root diameter of about 2 cm and an extensive rooting system are also beneficial.

Several questions have been asked about whether the 2013-2014 canola crop is going to survive the winter. Survival will likely depend upon the cultivar grown, plant growth in the fall, planting date, and the severity of winter. Canola that is well established with a thick crown and robust root system has the greatest chance to survive a cold winter. Canola that emerged late with a weak root system is at the greatest risk for winter kill. 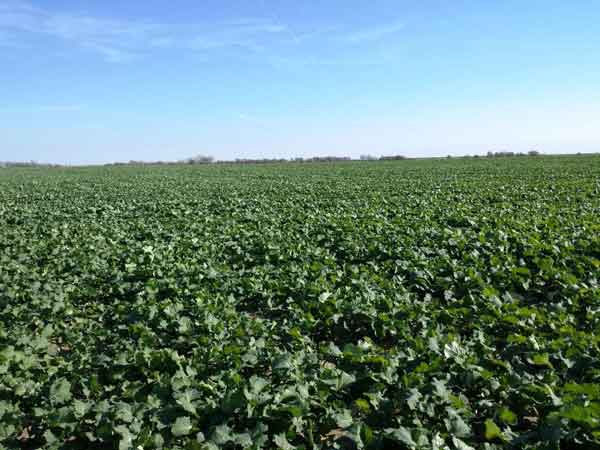 Producer’s winter canola field near Kingman in mid-November, at the appropriate size for the winter hardening process. Photo by Mike Stamm, K-State Research and Extension.

In order to survive the winter, canola must go through a hardening process. This begins in the rosette stage in the late fall after several days of near-freezing temperatures (about 35ºF). At these temperatures, plant growth is slowed, resulting in smaller cells with a higher concentration of soluble substances more resistant to frost damage. A few hard freezes (about 26ºF) are beneficial to halt leaf growth and promote hardening. Longer acclimation periods with fewer dramatic swings in temperature are beneficial to hardening and increase freezing tolerance in plants. It’s at this stage when canola takes on an overwintering appearance. This is a natural process as top growth is lost.

For canola that had adequate fall growth, the cooler December should have provided sufficient winter hardening. This canola should withstand the temperature fluctuations we are experiencing as of late. Hardened winter canola can endure a certain amount of time with temperatures at or below 0° F, depending on the cultivar. However, extended periods of temperatures at or below 0° F without snow cover may be detrimental to survival. Winter survival should improve whenever snow cover is present. 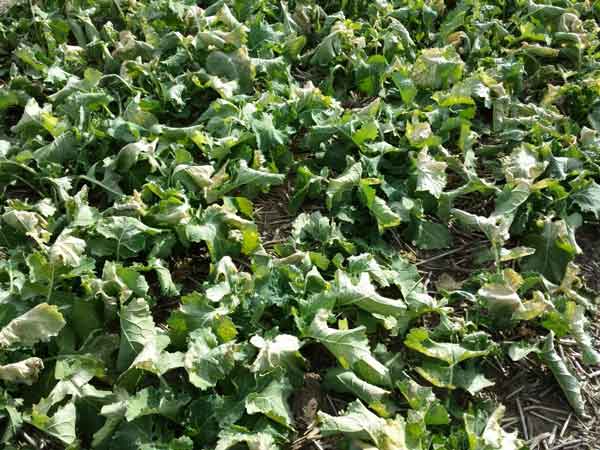 Canola that is hardening off and taking on an overwintering appearance near Manhattan. Photo taken December 3, 2013 by Mike Stamm, K-State Research and Extension.

Research conducted by K-State indicates winter warming trends can actually have a positive effect on winter survival in some ways. Green leaf tissue may have increased metabolic activity, rejuvenating the overwintering plants. This partly explains why plants growing in the field can survive colder temperatures than plants acclimated at continuous cold temperatures in a controlled environment. If the warming trend is followed by a gradual cool down and no stem elongation occurs, then plants can re-harden. In addition, as long as low nighttime temperatures accompany high daytime temperatures, the rate of un-hardening should be slowed.

Although it is too soon to say that the canola crop is no longer in danger of stand loss, producers can still evaluate their stands for winter kill this time of year. Normally, winter survival is assessed visually after the danger of further stand loss has passed, which is usually mid-March in Kansas. When evaluating winter survival, look for green leaf tissue at the center of the rosette or crown. If green leaf tissue is present and the crown is firm when squeezed, it is likely the crop will resume active growth as temperatures rise and day length increases. The root may be examined as well for firmness and vigor. Also remember that the branching ability of canola allows it to easily compensate for stands where some winter kill is observed. A harvest population of four to 15 plants per square foot is optimum; however, a stand of one plant per square foot is acceptable although yield potential will be reduced.

In the picture below, winter kill was observed in a variety trial near Enid, OK. Heavy rainfall following planting reduced stands and delayed emergence, resulting in smaller than normal plants. Thus, the smaller plants were susceptible to winter kill. The green plants in the picture are still alive. Other varieties in the trial showed better winter hardiness. 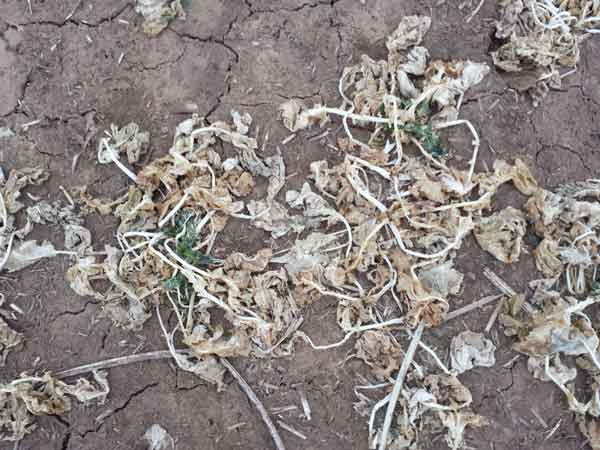 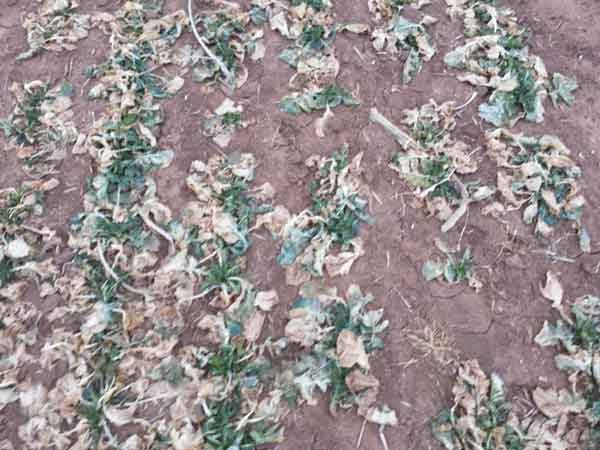 A variety in the same trial was showing better winter hardiness although fall stands were poor. Photo by Mike Stamm, K-State Research and Extension.

To increase canola’s consistency in the region, the canola breeding program at K-State continues to select for winter hardiness traits. Breeding accessions possessing longer vernalization periods are being crossed into the germplasm pool. One theory on improving winter hardiness is that canola can harden more easily after a winter warming trend prior to the vernalization requirement being reached. Therefore, extending the vernalization requirement may allow plants to withstand more variations in temperature during the winter months.

Winter hardiness remains an important trait to consider when selecting a cultivar for any canola cropping system. Differences exist, however, so decisions should be based on results from multiple years and locations. We have not experienced conditions that promote widespread winter kill for a couple of years, so producers may need to review data from 5 or 6 years ago to help with variety decisions. Remember that there are other factors to consider when selecting a variety or hybrid including: yield potential, seed oil content, maturity, lodging tolerance, disease resistance, and herbicide tolerance to name a few.

Winter survival will depend on soil moisture at planting, planting date, and the variety selected. When scouting your canola periodically this winter, check for a green, healthy crown. If you find that, then expect the crop to survive. Regrowth will begin when average daily temperature is 40° F or greater and day length increases in the spring.