The science behind the fall outlook

The fall weather outlook can be complex and is reliant on many various patterns across the globe. Many changes in regions outside the United States influence our persistent patterns. However, it only takes one storm system, or wiggle in the pattern, to have a pronounced impact on Kansas weather. In recent memory, 2018 was extremely dry for Manhattan (and across the east Kansas) - however, two significant rain events (one in September and October) triggered flooding and changed the course of not only the fall, but also set the stage for the wet conditions into 2019. 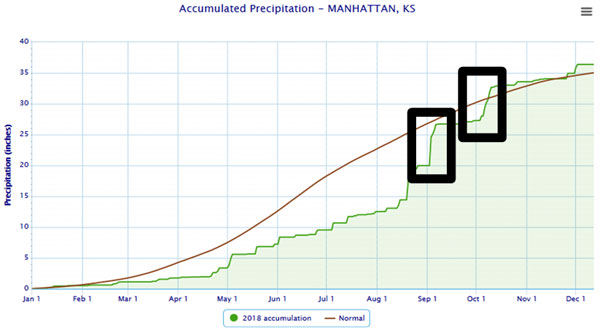 We can take guidance on the existing patterns of late summer and use them to project what may happen during the transition between summer and winter. Ocean temperatures not only have an implication on ENSO (El Niño or La Niña, explained in next section), but also provide input from other trends.

Warm Atlantic: First, of interest is the area highlighted in black in Figure 2. These Atlantic waters are above normal temperature-wise and have already led to one of the most active hurricane seasons to date. This trend is expected to continue. Unfortunately, these tropical storms don’t often provide direct impacts to Kansas. These storms usually develop high pressure and subsidence around them which depending on where they persist, can create warm/dry conditions in adjacent areas. While not completely telling, an active season would not be overly conducive to fall moisture in the central Plains as forecast models are suggesting (Figure 3). 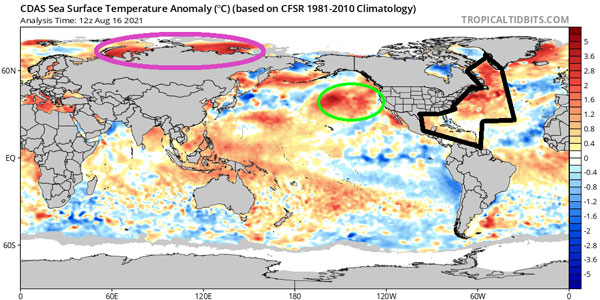 Warm east Pacific: Another area of focus is the eastern Pacific where warmer waters have redeveloped over the past few months (green circle, Figure 2). When warm water resides in this region, the active jet stream is shifted northward. This often results in storm systems being injected further south over central/east US and colder-than-normal temperatures. However, when combined with the previous Atlantic state, this could lead to broad ridging (high pressure) across much of the US. This would then imply warmer and drier-than-normal conditions across much of the continental US as models are also suggesting (Figure 3).

Warm Arctic waters: A trend of recent years, the drastic reduction of Arctic sea ice has allowed for a negative feedback cycle of warmer waters (purple highlight, Figure 2) and warmer temperatures. While this doesn’t directly impact Kansas fall weather, it could have later implications on the Arctic Oscillation (AO) and the North Atlantic Oscillation (NAO). Warmer-than-normal conditions tend to imply a negative condition of the AO and NAO which often drive hurricanes up the East Coast and allow a higher amplitude storm track (periods of warm/cold with heavy rain events instead of a prolonged warm or cold period). While that may help Kansas’ moisture chances into early winter, combined with especially the warm east Pacific, it may track a majority of the rainfall further east (as hinted in the forecast models - especially in October, Figure 3). 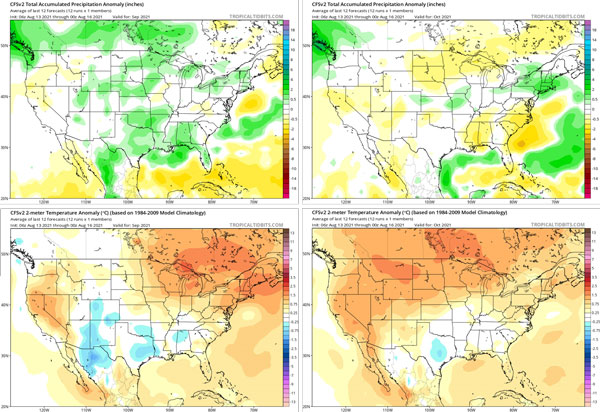 The El Niño Southern Oscillation (ENSO) was in the negative (La Niña) state until the May-July period when it went neutral. However, conditions in the Pacific are changing, and a La Niña watch has been issued. The most recent ONI (Oceanic Niño Index) for the May, June, July (MJJ) period is -0.4 degrees Celsius, which is just above the La Niña threshold of -0.5 degrees Celsius. However, the weekly update from August 11 shows a negative pattern in the anomalies across the equatorial Pacific. The outlook favors continued neutral conditions during the summer, with a 60 percent chance of a La Niña by autumn. 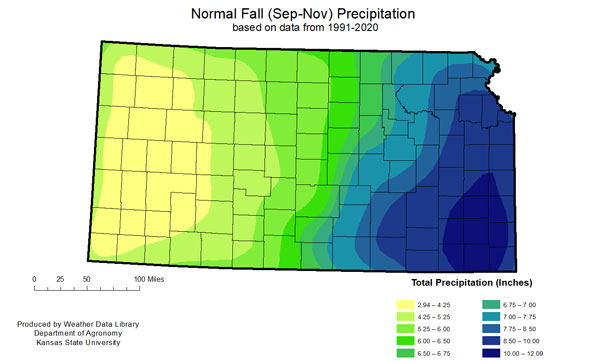 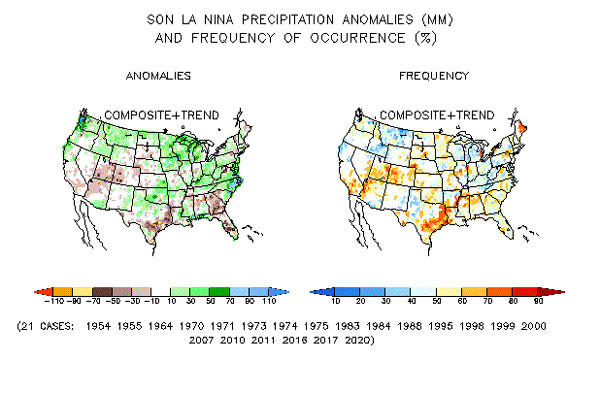 The Climate Prediction Center’s long-lead outlooks have the greatest skill when the ENSO is strongly in one phase or another. The outlooks are least reliable when the ENSO is in the neutral phase, as other global circulation features battle for dominance. Historically, summer is a neutral period and serves as the transition between either Nino/Nina or vice versa. However, as summer ends, the probability of a dominant pattern (Nino/Nina) increases as shown below, justifying the CPC’s outlooks for this coming late summer and fall (Figure 6). 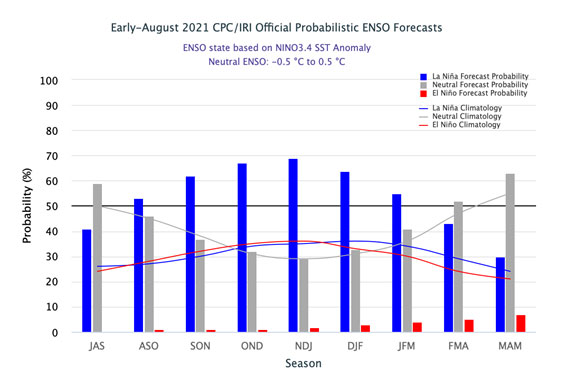 So what does it boil down to? Here are the Climate Prediction Center’s thoughts on the outlook for fall (September, October and November). They consider all the factors (and more) discussed above and came up with the following (Figure 7):

While there are higher chances of a warmer-than-normal period and drier than normal - averaging over a three-month period can often dilute a period of anomalous weather. Therefore, one event would not be represented well - such as the few days of heavy rain in 2018. However, trends are definitely supportive of higher chances of drier-than-normal conditions over the three-month period. It is also important to keep in mind that just an increased chance of warmer/drier does not mean that a cooler/wetter or normal period is out of the question - they just have lower probabilities (Figure 8). The probability of warmer weather is at/above 40% for much of the state - a much higher confidence interval than below normal precipitation, which is only slightly hedged above one third probability. 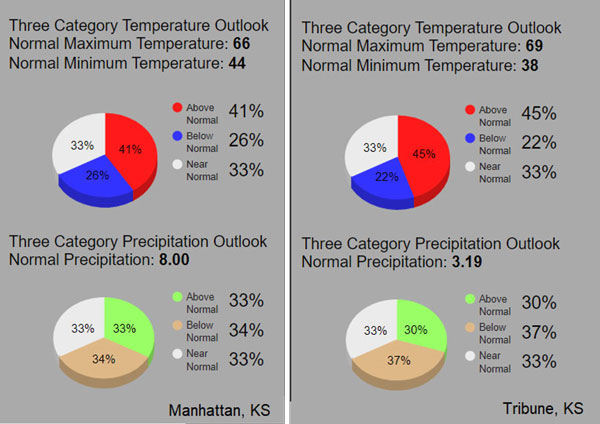 Figure 8. Probability of above, below, and normal conditions for Manhattan (left) and Tribune (right). Source: CPC

Lastly, keep in mind that the coming months are a transition season. During the fall, average temperatures are falling daily and normal precipitation amounts are decreasing as we approach the coldest and driest period of the year for Kansas - winter.