One major consideration before deciding to plant a double crop or cover crop after wheat is the potential for herbicide carryover. Many herbicides applied to wheat are in the sulfonyl urea herbicide family and have the potential to remain in the soil after harvest. If an herbicide such as Finesse, Glean, or Ally has been used, the most tolerant double crop will be sulfonylurea-resistant varieties of soybean (STS, SR, Bolt) or other crops. If you chose to use herbicide-resistant varieties, be sure to match the resistance trait with the specific herbicide (not just the herbicide group) that you used. 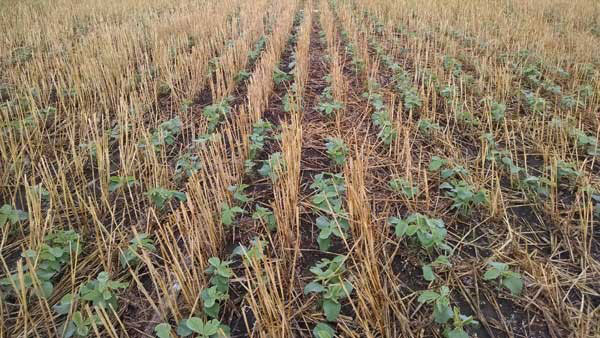 Weed control. The cost for weed control cannot really be counted against the soybeans, since that cost should occur whether or not a soybean crop is present. In fact, having soybeans on the field may reduce herbicide costs compared to leaving the field fallow. Still, it is recommended to apply a pre-emergence residual herbicide before or at planting time, especially if weed resistance to glyphosate has been a problem. Later in the summer, a healthy soybean canopy may suppress weeds enough that a late-summer post-emergence application may not be needed.