The brown marmorated stink bug is one that may have fallen “off the radar” of farmers in Kansas. In recent years, this insect has been slowing making its way further west. Learn more about this potentially problematic pest, including how to identify it in the field and how to report sightings.

Native to Japan, Korea and China, the brown marmorated stink bug (BMSB) was first detected in 1998 in Pennsylvania. Over the last two decades it has become a significant structural nuisance, congregating in large numbers on and in houses in the fall.  More importantly, in eastern North America, it has established itself as a major fruit, vegetable, and crop pest. Its range continues to expand and climate models show an increase in regions suitable for its establishment (Figure 1).

The BMSB was first reported in Kansas at a gas station in 2011 in Douglas County.  Since then, sightings have been limited mainly to far eastern Kansas, however in 2021 BMSB was identified further west in Reno County. 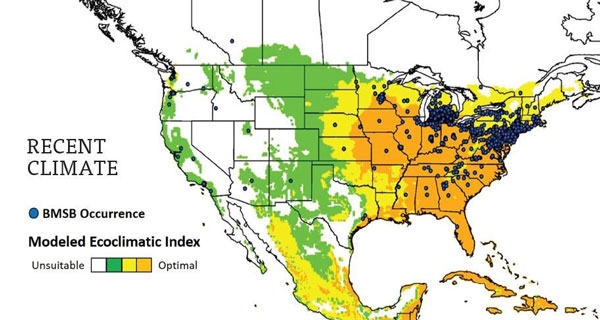 After emerging from overwintering sites in spring, BMSB adults begin mating and laying eggs on trees and host plants. In most of its range, BMSB completes one to two generations per year, developing through an egg and 4 nymphal stages before adulthood (Figure 2).  In the fall, adults congregate in various overwintering sites including homes and other structures.

Capable of flying over 70 miles per day, BMSB has proven to be a landscape-level problem.  With 70 known host plants in North America, significant economic losses have been reported. In 2010, a brown marmorated stink bug outbreak was the cause of over $37 million in losses to tree fruit producers in the mid-Atlantic region.  In addition to numerous fruit and vegetable operations, field corn, soybeans and sunflowers are among commercial crops that could be at risk in Kansas (Figure 3). 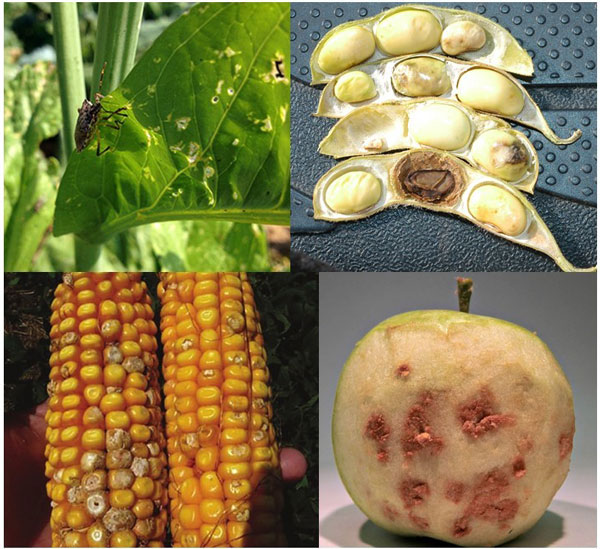 Naturally occurring egg parasitoids are effective at keeping native stinkbugs in check, but native egg parasitoids in north America do not develop well on BMSB eggs. Various pyrethroid insecticides have been shown to provide control in eastern states, but these products also impact natural enemies and there are concerns over the development of resistance due to the need for repeated sprays during the season.

Given the potential for BMSB to become a serious pest, it is important to track its occurrence and population status in Kansas.  Report any sightings to your local K-State Extension professionals or the Kansas Department of Agriculture.  For identification of BMSB and comparison to similar stink bugs, please see the included document “Identification of the Brown Marmorated Stinkbug, Halyomorpha halys”.

Sources for Figures 2 and 3: