The weather is warming, and wheat has started to green up across the state.  With the onset of spring weather, it is time to look at factors that could influence the yield potential of the Kansas wheat crop. Recent rainfall across the state has improved the condition of the crop. Producers may be starting to consider disease management plans.

Experience has taught us that weather conditions in Texas play a critical role in the development of regional outbreaks of stripe rust. Weather conditions in Texas in both the fall and spring can be used to predict the severity of the disease in Kansas in a given season. K-State research has been focused on further understanding these weather relationships. This year there were two weather events that may lower stripe rust pressure in Kansas: 1) dry weather in the fall in Texas, and 2) the recent February freeze event in Texas. The early dry weather likely lowered overall inoculum levels heading into the spring. The recent freeze likely killed off leaves with active stripe rust pustules. These two weather events together should delay arrival of stripe rust in Kansas and lower overall final disease levels.

The research points to two time periods that strongly influence the amount of disease in the region. The first time period occurs in the preceding fall (October - December) when the wheat crop is being planted and beginning to grow. The second time period occurs in the early spring (February - March) as the crop in Texas moves into the grain-filling stage. To illustrate these findings, let us look at a series of maps showing moisture conditions in southern Texas over some recent growing seasons (Figure 1).  These maps indicate that stripe rust epidemics in Kansas are often preceded by above-normal moisture conditions in these key overwintering locations for the rust diseases. However, when these regions are dry, stripe rust severity in Kansas generally remains low. A look at the moisture patterns for 2021 indicates that rainfall in this area was below normal (see the 2021 map in Figure 1). This pattern suggests that the risk of a severe outbreak of stripe rust in Kansas is low for this year. 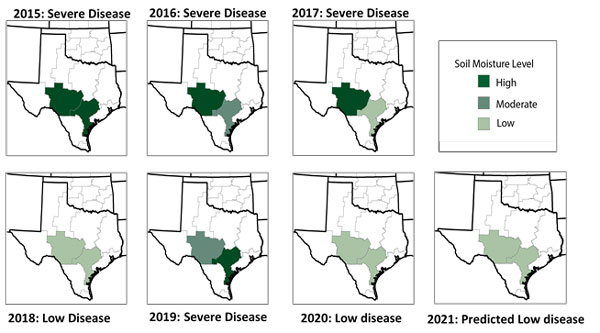 Figure 1. Soil moisture levels in southern Texas when the wheat crop was established for the 2015-2021 growing seasons. Notice that in the low disease years, dry conditions (lightest green colors on the maps) dominate southern Texas. In years with severe stripe rust, moderate or high soil moisture conditions are prevalent in these same regions. These maps show soil moisture levels based on November “Palmer Z-Index” provided by NOAA-National Centers for Environmental Information.

This is consistent with observations from Dr. Amir Ibrahim, wheat breeder at Texas A&M University, who has indicated lower than normal stripe rust in 2021 with no disease observed in breeding nurseries near San Antonio and low initial levels of stripe rust reported near College Station.

Reports from Dr. Bob Hunger and Dr. Amanda de Oliveira Silva, Oklahoma State University indicate low levels of stripe rust near Stillwater, OK. Leaf rust was also detected prior to the freeze event, but has not been detected since.

Although weather this past week has been favorable (cool and wet), we have not received any reports of stripe rust in Kansas in 2021. We will need to remain vigilant over the coming weeks to see if the disease moves north.

Please contact us (andersenk@ksu.edu) if you detect stripe rust in Kansas so we can update regional maps.