Many fields in Kansas emerged late (from late October into November) during the 2020 growing season due to extremely dry conditions during the fall, especially in October when the bulk of the wheat is planted around the state. While some precipitation occurred until mid-September, October precipitation was mostly less than 0.5 inches for most of north-central and western Kansas and did not happen until the later portion of the month (Figure 1). 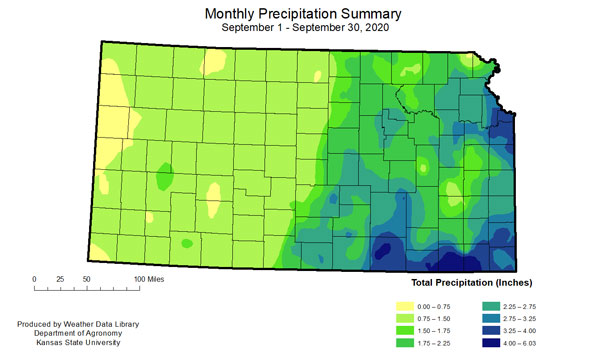 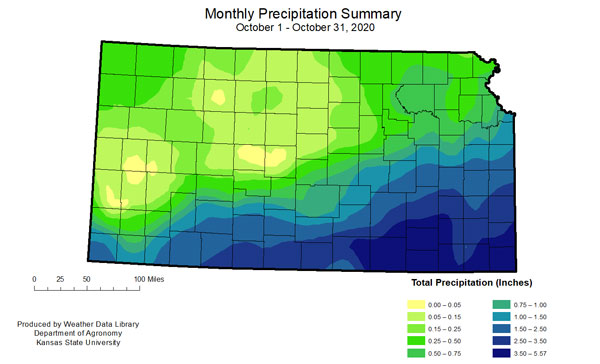 Figure 1. Total precipitation during the months of September and October 2020. Graph courtesy of the Weather Data Library.

Consequently, even wheat fields that were planted on a good timing resulted in a late-emergence. Late-emerged winter wheat has considerably less yield potential than a crop emerged at the optimum time. Producers will have to decide whether maintaining the crop is a viable option – especially as the late-emerged crop might be more exposed to winterkill from the recent cold temperatures (see the accompanying article on potential for winterkill).

Research conducted by Merle Witt with late-sown wheat in Garden City from 1985 through 1991 is summarized in Figure 2. Averaged across all these years, delaying wheat sowing from October 1 to November 1 delayed heading date by 6 days and decreased wheat yields in 23%. The grain-filling period was progressively shortened by about 1.7 days and occurred under hotter temperatures (about 1.5°F) for every month of delay in sowing date. 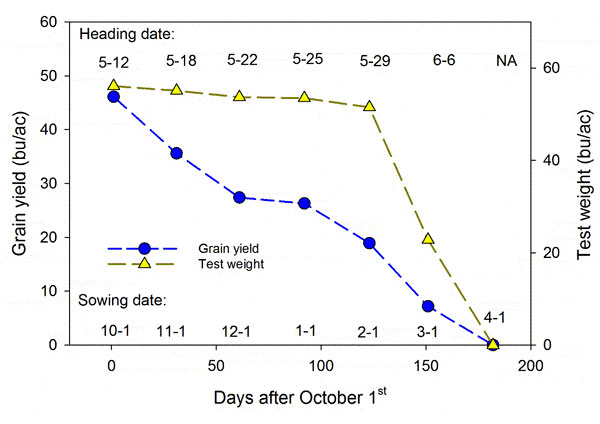 In summary, the potential consequences of the delayed progress of the Kansas wheat crop during October include greater exposure to winterkill, delayed crop cycle for grain filling under warmer conditions, and a lower yield potential due to decreased fall tillering. Research evaluating effects of weather conditions on long-term variety performance tests indicated that wheat yields were influenced the most by favorable precipitation conditions during the fall that promoted stand establishment and moist soil conditions (Holman et al. 2011). However, if the weather conditions during the remaining season are favorable (mild winter, and cool and moist spring), the crop might still result in decent a yield (Figure 3). 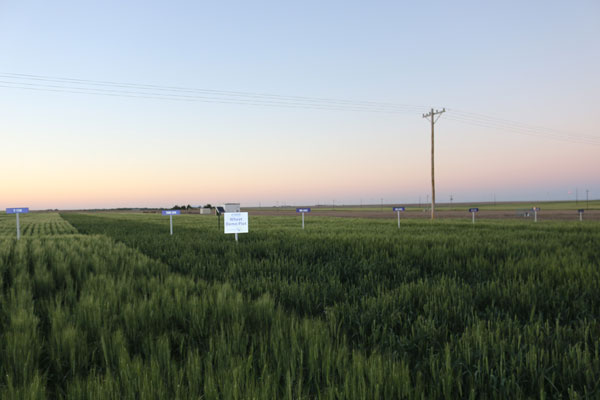 Figure 3. K-State wheat demonstration plot near Dodge City, KS, during June 2017. While this crop was sown normally during October 2016, it had not emerged in the fall due to extremely dry conditions. An ice storm on January 2017 sufficed for the crop to emerge, and favorable winter and spring weather conditions led to a decent yield potential despite harsh initial conditions.