Most plant disease management decisions for soybeans need to be made before the seed hits the furrow. The exceptions are fungicide applications for frogeye leafspot and diseases that affect seed quality such as Phomopsis pod and stem blight, purple seed stain, and anthracnose.

Variety selection, crop rotation, and seed-applied chemical choices are the best management practices for the most common soybean diseases in Kansas. The 2018 Soybean Disease Loss Survey has recently been released. The top soybean diseases in 2018 across the U.S. were in order, soybean cyst nematode (SCN), seed quality diseases such as pod and stem blight, frogeye leafspot, sudden death syndrome (SDS), and soilborne seedling diseases. The list for the Kansas 2018 cropping season is similar, except there was less SDS due to the summer-long drought. Kansas producers also had significant late-season Phytophthora root rot issues from the excessive rains that began in early August and continued through maturity.

SCN, SDS, and Phytophthora root rot are best managed by variety selection. There is some limited response to rotation, and seed treatment is available for SDS, and to some extent SCN. Currently, all soybean varieties have some basic resistance to SCN, but those varieties available in Kansas derive their resistance from the same parent, PI88788. It has been shown that soybean varieties vary in the number of copies of the resistance gene they contain and that more copies result in better resistance. Since this information is not readily available, it is recommended to never plant the same variety twice in the same field. This will prevent the selection of nematode populations that that will thrive on any particular variety. Generally, the most resistant varieties will not respond to the addition of a seed treatment nematicide, since resistance alone will get the job done.

SCN-infested fields are more likely to also have SDS problems, since as the nematode enters the root, it creates a pathway for the SDS fungus to follow. In fields with a history of SDS, it is important to select varieties with good SDS resistance. Remember, SCN resistance and SDS resistance are independent of each other. Since no varieties are immune to SDS, the use of ILeVO fungicide seed treatment is recommended, especially on early-planted fields. ILeVO can also give some protection against the nematode.

Phytophthora root rot is also best managed by variety selection, although water management can also be important in limiting losses. There are race-specific genes to Phytophthora, but since there are well over 50 known races of the fungus, it may be difficult to match resistance genes to the races in a particular field. Therefore, field tolerance scores are usually more important in measuring the variety’s response to the disease.

We generally lump soilborne seedling diseases into one category, but in Kansas, there are three separate pathogen groups, Pythium, Rhizoctonia, and Fusarium that can cause stand loss issues and reduced yields depending on soil temperatures and soil moisture (Figure 1). Unfortunately, many of our seed treatment fungicides are specific to only one of the groups. Therefore, it is important to choose a product that has a two-, three-, or even four-way combination of materials with modes of action that will control whatever pathogen group may be in the field. 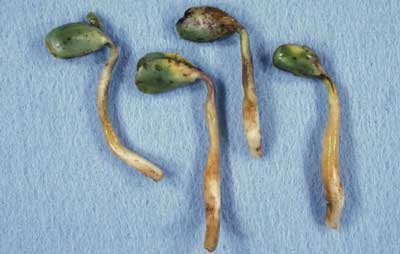 The end of 2018 was characterized by seed quality issues due to the extended rains across much of the western soybean growing region. Seed quality testing labs, such as at the Kansas Crop Improvement Association, are reporting significantly reduced germination rates due to the poor-quality seed. When diseases such as Phomopsis, purple seed stain, and anthracnose are present on the seed, they can interfere with germination and cause poor stands (Figure 2). Stands that are too thin may need replanting (if seed is available) or have too few plants to maximize yield. Seed treatments can be useful in controlling these seed-borne diseases. Growers who routinely use fungicide seed treatments should have fewer worries, but if a grower has not invested in fungicides seed treatments in the past, 2019 would be a great time to start. 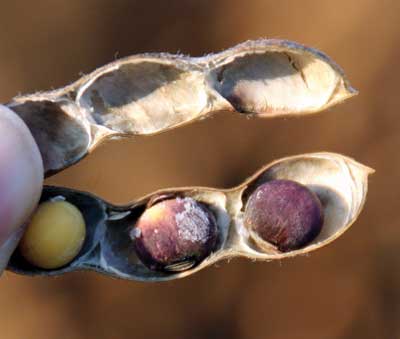 Figure 2. Purple seed stain. Infected seed varies from pale pink to dark purple discoloration of the seed coat. In most cases, the seed embryo is not affected, but germination of infected seed may be reduced. Photo courtesy of the Crop Protection Network.