Difficult weeds, especially glyphosate-resistant weeds, are controlled most consistently with soil-applied herbicides which kill germinating seeds/seedlings. Much of the resistance to glyphosate has developed from over-reliance on post-emergence herbicide applications for weed control. Thus it is essential to include one or more of the preplant and pre-emergence residual herbicides available for corn. The specific herbicide you use, although important, is usually less important than just making the decision to use a preplant or pre-emergence herbicide.

It is important to change herbicide programs from time to time so that you do not get hooked on any single herbicide program year after year. Weed species shift and develop resistance to herbicide programs that do not change. It’s also important to know the strengths and weaknesses of each product in terms of the spectrum of weeds controlled. A table summarizing weed species response to various corn herbicides can be found on pages 24-26 of 2019 Chemical Weed Control for Field Crops, Pastures, Rangeland, and Noncropland (SRP 1139) at: https://www.bookstore.ksre.ksu.edu/pubs/SRP1148.pdf 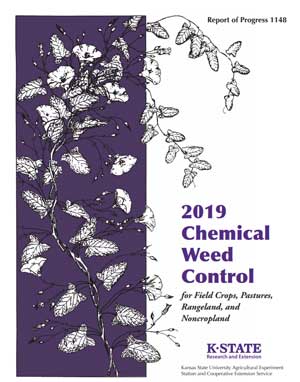 For burndown applications in a no-till system on emerged grass and broadleaf weeds, an application of glyphosate (9) and a product containing dicamba (4) or 2,4-D (4) may be critical. The choice between 2,4-D and dicamba will depend on weed species present. Dicamba products will be more effective on kochia and marestail. 2,4-D is more effective on winter annual mustards. The use of pre-emergence herbicides, applied just before or following planting, often provides control of weeds for several weeks. This can greatly improve the effectiveness of a post-emergence herbicide application, and gives the producer more leeway on post application timing.

Soil-applied residual herbicides for corn can be grouped into several basic categories.

Atrazine (5) is a common component of many preplant and pre-emergence herbicide premixes for corn. Where weed pressure is light, a March application of atrazine with crop-oil concentrate and 2,4-D (4) or dicamba (4) can control winter annual weeds such as mustards and marestail and provide control of most germinating weeds up to planting. If kochia is the key target, 0.5 to 1.0 lb/acre atrazine (5) with a pint of dicamba (4) applied in late February to early March can provide excellent control of germinating kochia. It is essential to add glyphosate (9) to the mix if winter annual grasses are present. In a premix with other herbicides, atrazine adds burndown control of newly emerged grasses and broadleaf weeds present near planting time, as well as some residual control of small-seeded broadleaf weeds such as pigweeds and kochia (except for triazine-resistant populations). Unless your situation prohibits atrazine use, always apply atrazine (5) with HPPD-inhibitor (27) and acetamide (15) herbicides.

Acetamides (15) and pyrazole (15) /atrazine (5) premixes. The main acetamide (15) products used in corn include acetochlor, S-metolachlor, metolachlor, dimethamid-P, and many premix products containing one of these active ingredients. The pyrozole products include Pyroxasulfone (15) is a pyrazole herbicide, but has the same site of action as the acetamides. In general, these products are very effective in controlling most annual grasses (except shattercane) and small-seeded broadleaf weeds such as pigweeds. They are much less effective in controlling small-seeded kochia or large-seeded broadleaf weeds such as cocklebur, devilsclaw, morningglory, sunflower, and velvetleaf. An exception are those products containing pyroxasulfone – Zidua (15), Anthem (15, 14), and Anthem ATZ (15, 14, 5). These products have activity on kochia and velvetleaf. There have been no cases of weed populations in Kansas developing resistance to the group 15 herbicides to date.

The acetamide and pyrazole products are most effective when applied with atrazine. Several atrazine (5) /acetamide or pyrazole (15) premixes are available and should be used instead of acetamides or pyrazole alone unless atrazine is not allowed. These premixes generally fit into two groups: products with a reduced atrazine rate (1 lb or less / acre) and products with a full atrazine rate (1 to 2 lb/acre). Soil type, soil pH, and organic matter will determine whether the reduced- or full-rate atrazine product is used. In past years, often because of cost, reduced rates of these products were applied to help manage heavy summer annual grass pressure, then followed up with a good post-emergence herbicide program. With the increased occurrence of glyphosate- and other herbicide-resistant weeds, it is essential to use the full rates of these products in conjunction with a POST program.

Acuron (27, 15, 5), Lexar EZ (27, 15, 5), Lumax EZ (27, 15, 5), Resicore (27, 15, 4) and Corvus (17, 2)+atrazine (5) provide excellent control of grass weeds. Corvus will also control shattercane. Balance Flexx has activity on shattercane but is less consistent than Corvus. Prequel has a low rate of Balance mixed with Resolve and will not provide the same level of residual weed control as Acuron, Resicore, Lexar EZ, Lumax EZ, Balance Flexx, or Corvus used at full rates. Keep in mind, products containing Balance should not be applied to coarse-textured soils when the water table is less than 25 feet below the soil surface. Balance Flexx does not provide adequate control of sunflower. Corvus will be much better than Balance Flexx on sunflower, provided the sunflower is not ALS-resistant. Herbicides containing clopyralid (4) such as Hornet (4, 2), Resicore (15, 4, 27), TripleFlex II (15, 4, 2), or Surestart II (15, 4, 2) will also provide very good control of sunflower.

A new herbicide from Syngenta called Acuron contains Lumax EZ (27, 15, 5) + bicyclopyrone (27). Bicyclopyrone is an HPPD-inhibitor herbicide that enhances large-seeded broadleaf weed control and also has grass activity. Acuron (27, 15, 5) provides enhanced control of giant ragweed, common ragweed, common cocklebur, and velvetleaf, along with improved morningglory control compared to Lumax EZ. Acuron Flexi (27, 15) is basically Acuron without atrazine. Acuron Flexi (27, 15) and Zemax (27, 15) (basically Lumax without atrazine (5)) were developed for areas where atrazine generally isn’t used or is prohibited. Resicore will also fit in this scenario and is the most effective of the non-atrazine products in this list. Zemax and Acuron Flexi, without the atrazine (5), may provide less broadleaf weed control.

PPO-inhibitors (14). Examples of PPO-inhibitors include flumioxazin (e.g. Valor (14), and Fierce (14, 15), and saflufenacil (Sharpen (14), and Verdict (14, 15). Valor or Fierce must be applied 7 to 30 days before corn planting in a no-till system. These herbicides provide excellent control of pigweeds; however, they are marginal on kochia. Fierce will provide improved control of velvetleaf and kochia compared to Valor. The addition of atrazine (5) will enhance kochia, pigweed, velvetleaf, and morningglory control, provided the populations are not triazine-resistant. Sharpen and Verdict have excellent activity on pigweeds, kochia, and large-seeded broadleaf weeds. However, the length of residual activity can be shorter than other pre-emergence products when all are compared at full rates. This will depend on the rates of Sharpen and Verdict used. Approximately 7 to 10 days of residual can be expected per 1 oz of Sharpen and 5 oz of Verdict.

ALS-inhibitors (2). Examples of ALS-inhibitors for use as a soil-applied herbicide for corn include flumetsulam, Python (2); and Hornet (2, 4), a premix of flumetsulam (2) and clopyralid (4). Both herbicides have broadleaf activity only. These products are strong on large-seeded broadleaf weeds such as cocklebur, sunflower, and velvetleaf, or the small-seeded common lambsquarters. Adding Hornet to a full rate of an acetamide (15) /atrazine (5) mix as a pre-emerge treatment will control the annual grasses and add considerably to large-seeded broadleaf weed control. Three-way premixes of acetochlor (15)+clopyralid (4)+flumetsulam (2), include SureStart II (15, 4, 2) and TripleFlex II (15, 4, 2). These products are especially effective for control of sunflower, along with cocklebur and velvetleaf, but less effective for morningglory control. Resicore (15, 4, 27) is a premix of acetochlor (15)+clopyralid (4)+ mesotrione (27). This product contains 3 modes of action as did SureStart II and TripleFlex II, only the ALS-inhibitor (2) has been replaced with an HPPD-inhibitor (27).

Rimsulfuron is another ALS-inhibiting (2) herbicide that is a component of Prequel (2, 27), Instigate (2, 27), Basis (2), and Basis Blend (2). Products with Rimsulfuron will provide short residual control of grass and broadleaf weeds and should be used as a setup herbicide with a good postemergence weed control program. If ALS-resistant broadleaf weeds are present, these ALS-containing herbicides often will be less effective.