The severe problems wheat producers had with wheat streak mosaic virus in years past can be traced back, in most cases, to a lack of control of volunteer wheat. Problems with wheat production the previous year can leave large amounts of seed on the soil surface. As this seed germinates, it creates a “green bridge”, allowing wheat streak mosaic and wheat curl mites to survive locally.

This year, the wheat crop faced several challenges that might increase the amount of seed left behind after harvest, which would also increase the amount of volunteer wheat (Figure 1). These problems included hailed out wheat, head scab (Fusarium head blight), and a large region affected by waterlogged conditions. One of the recommendations to fields affected by head scab is to increase the fan speed of the combine and “blow” the diseased kernels out of the harvested grain.  Likewise, waterlogged conditions decreased wheat kernel weight and likely increased harvest losses of grain. These smaller kernels might germinate into volunteer wheat increasing the risk of severe wheat streak mosaic the following year. 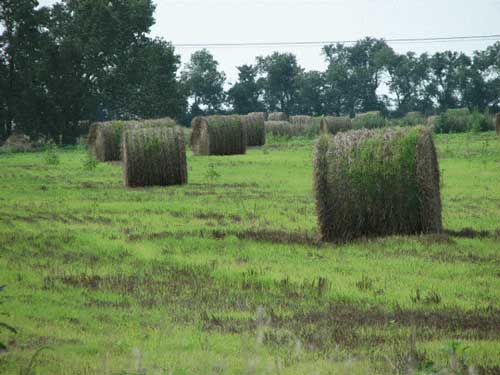 Wheat curl mites will move off growing wheat as the green tissue dries down and dies. After moving off the existing wheat at or near harvest time, the mites need to find green tissue of a suitable host soon or they will die of desiccation.

Producers often like to wait several weeks after harvest before making their first herbicide application to control volunteer wheat. This allows as much volunteer as possible to emerge before spraying it or tilling it the first time. Often, a second application or tillage operation will be needed later in the summer to eliminate the green bridge to wheat by making sure all volunteer is dead within ½ mile of wheat being planted in the fall. Wet weather prevails through late summer often favors multiple flushes of volunteer wheat and also favors the growth of other grassy weeds that can also support moderate populations of the curl mites and virus. These weather patterns keep a lot more alternate host plants alive during the critical period when mites and virus would not have plants to survive on.

If volunteer has emerged and is still alive shortly after harvest in hailed-out wheat, wheat curl mites could easily build up rapidly and spread to other volunteer wheat that emerges later in the season. On the other hand, if this early-emerging volunteer is controlled shortly after harvest, that will help greatly in breaking the green bridge. However, if more volunteer emerges during the summer, follow-up control will still be needed. 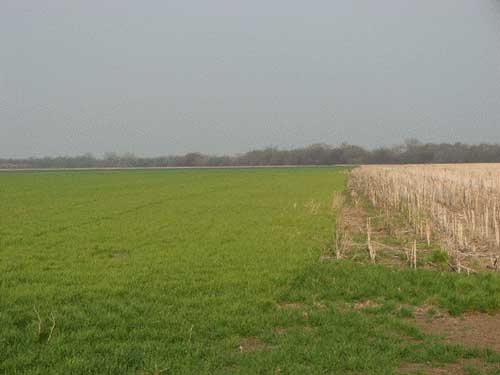 Figure 2. Volunteer wheat on the edges of a sunflower field were infested with wheat curl mites and caused a wheat streak mosaic infection in the adjacent wheat crop that fall. Photo by Stu Duncan, K-State Research and Extension. 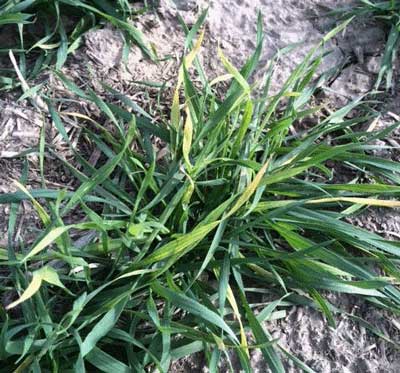 In addition, there are a handful of varieties with resistance to the wheat curl mite, including TAM 112, Byrd, Avery, Langin, and T158. These varieties are actually susceptible to the viral diseases, but they generally slow the development of the mite populations in the fall.  This resistance can help reduce the risk of severe disease but will not provide enough protection if wheat is planted in close proximity to volunteer wheat or other hosts infested with large populations of the curl mites and virus.