In a normal year, producers would start planning for topdressing nitrogen (N) on the winter wheat crop in early February. However, with challenges related to excessive moisture and snowfall, and below-average temperatures in significant parts of the state, the majority of the Kansas producers have not been able to topdress their crop. Additionally, about half of the Kansas wheat crop is extremely small (less than one tiller) due to late planting last fall coupled with below-average winter temperatures. Thus, some key elements that need to be considered when deciding on the exact program you plan to use include: timing, N source, application method and N rate.

Ideally, the N in topdress applications will be moved into the root zone with precipitation well before jointing begins in order to be most efficiently utilized by wheat. With some of the small wheat out there with limited fall tillers, having adequate N available to support spring tillering when it breaks dormancy will be important. Also, the potential number of meshes per head is determined after spring green-up and prior to jointing; thus, having available N in the root zone can help ensure a good yield potential. Some combination of fall pre-plant or at-seeding N, and/or early topdressed N, is also normally needed to supply adequate N to support head differentiation. The following will discuss some of the issues to consider when making topdressing decisions.

Keep in mind that N should not be applied to the soil surface when the ground is deeply frozen and especially when snow covered. This will help prevent runoff losses with snow melt or heavy precipitation. This will be a special challenge this year, as most of Kansas soils are deeply frozen. Additionally, once the soils start to melt, they will likely be too wet for any field work. Therefore, every field should be considered for characteristics such as slope, N source, tillage system, and the short-term forecast for temperature and precipitation. 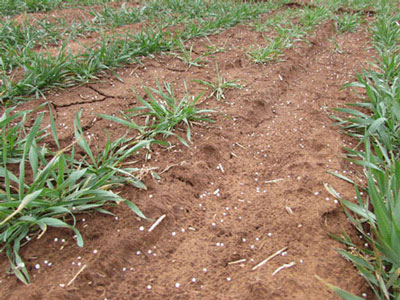