As temperatures warm up and nighttime readings remain above freezing for several days in a row, wheat leaves will change from their prostrate position of winter dormancy to an upright growth habit. On the widely-used Feekes scale of wheat development, Feekes 4 is the stage when leaves begin to become erect in the spring. Feekes 5 is when the leaves are strongly erect. On a practical basis, this can be hard to distinguish from stage 4. 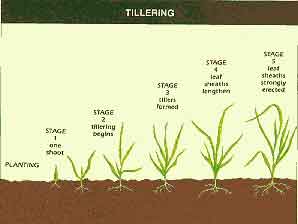 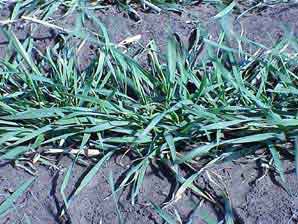 Figures 1 and 2. Feekes Scale and wheat at Feekes 4, as leaves begin to become erect.  Photos by Jim Shroyer, K-State Research and Extension.

At Feekes 4, in the photo above, the plants are losing the prostrate growth that they had during winter dormancy. The plants will usually continue to tiller for another 2 to 4 weeks, as long as there’s good soil moisture and the temperatures are not too hot. 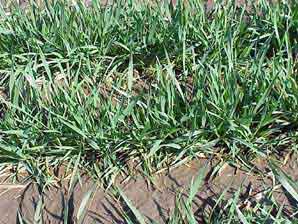 Figure 3. Wheat at Feekes stage 5, the leaves are strongly erect.

At Feekes stage 5, the leaves are becoming even more erect. During this stage, stems are formed and the growing point or head moves up inside the stem. As the plants emerge from the cold period of winter, the plants switch from the vegetative stage (leaves and tillers are developed) to the reproductive stage (the head is formed and grain is produced).

During Feekes stages 4 and 5, producers should apply topdress fertilizer if necessary. Producers should also scout fields for winter annual broadleaf weeds and insects such as greenbugs, bird cherry oat aphids, army cutworms, and others. It’s a little early at this stage to be concerned about leaf diseases, although powdery mildew and speckled leaf blotch can start to become active in late winter.

Herbicide choices at this time of year will be determined by the wheat’s stage of growth. Dicamba can be applied to wheat between the 2-leaf and jointing stages of wheat. Application of dicamba after wheat reaches the jointing stage of growth causes severe prostrate growth of wheat and significant risk of yield loss. Dicamba is effective for control of kochia, Russian thistle, and wild buckwheat, but is not good for control of mustard species. Kochia, Russian thistle, and wild buckwheat are summer annual weeds that may emerge before or after wheat starts to joint, so timing of dicamba for control of these weeds can sometimes be difficult. Fortunately, dicamba provides some residual control of these weeds following application.

Other herbicides that must be applied prior to jointing include Agility SG, Beyond (on Clearfield varieties only), Olympus, Olympus Flex, Orion, PowerFlex, Pulsar, Rage D-Tech, and Rave.

MCPA and 2,4-D have different application guidelines. In general, MCPA is safer on wheat than 2,4-D, especially when applied prior to full tillering. We recommend that 2,4-D not be applied to wheat until it is well-tillered in the spring. Application of 2,4-D prior to full tillering hinders the tillering process, causes general stunting and can result in significant yield loss.

MCPA is relatively safe on young wheat and can be applied after the wheat is in the three-leaf stage (may vary by product label) until it reaches the boot stage of growth. Consequently, MCPA would be preferred over 2,4-D if spraying before wheat is well-tillered. Neither herbicide should be applied once the wheat is near or reaches the boot stage of growth, as application at that time can result in malformed heads, sterility, and significant yield loss

There are a couple of additional concerns for the wheat at this point: winterkill and the potential for spring freeze injury to wheat at these early stages of growth.

There have been preliminary indications of some true winterkill in Kansas this year. So far, most of the reports have come from central Kansas. As wheat greenup progresses, any winter injury will become more apparent. Injured wheat may initially green up, then go backwards.

Producers need to contact their crop insurance representative before making any management decisions on fields that have had partial or complete winterkill injury. It would not be feasible to replant these fields to wheat at this time of year – either winter wheat or spring wheat. The chances of getting any yield from wheat planted this late are negligible.

If there are large areas of the field with winterkill, but other areas are fine, it would be best to avoid applying topdress fertilizer to the bare areas where the wheat has died.

If fields are completely dead, it might be possible to plant these fields to a summer row crop or forage crop later this spring, depending on plant-back restrictions from any residual herbicides have been applied to the wheat.

In general, the most tolerant summer crop to residues of these herbicides is STS soybeans, followed by grain sorghum. Product labels tend to specify grain sorghum, but forage sorghum and sudangrasses would likely have similar levels of tolerance. One major exception to this guideline is sorghum and Maverick herbicide. Sorghum is extremely susceptible to Maverick and should not be planted for at least 22 months after application.

Producers who want to recrop to sorghum on their wheat acres that have received one of these sulfonylurea herbicides should wait as long as possible to plant. Ideally, sorghum should not be planted on these fields until mid-June.

Cotton and non-STS soybeans are generally intermediate in tolerance to these herbicides. Although most of these product labels generally recommend not planting cotton or non-STS soybeans until the following year, the Maverick and Olympus labels allow shorter recrop intervals in the case of catastrophic events if a field bioassay indicates it is safe to plant the crop. Research at K-State on lower pH soils has shown minimal injury of cotton or STS soybeans planted in early June from residues of Maverick or Olympus applied the previous fall. However, the grower assumes all risk of crop injury.

Corn, sunflowers, canola, and alfalfa tend to be the most susceptible crops to the sulfonylurea herbicides and have rotation guidelines of 12 months or longer. With the high price of corn, many farmers may be interested in planting corn, but corn is very susceptible to residues of these herbicides.

Several herbicide labels make reference to shorter recrop intervals if planting IR corn. However, IR corn has been obsolete for many years and current Clearfield corn hybrids do not have the same level of cross resistance to sulfonylurea herbicides as did the IR corns.

Wheat fields that have been treated with Beyond herbicide can be recropped in the spring with any type of soybean or Clearfield sunflowers, but not to sorghum or corn.

Most other commonly used wheat herbicides in Kansas have very short crop rotation restrictions. In fields where herbicide carryover is a concern, it would be best to wait until later in the spring before planting to allow as much time as possible for herbicide dissipation. Tilling the soil to try to “dilute” the herbicide residue likely will not have a great benefit and could offset the benefits of not tilling the soil.

Where wheat has been growing for a week or more, producers may wonder whether a return to freezing temperatures may hurt the wheat.

In the tillering stage, the growing point is near the soil surface during this stage and is protected against injury. Most damage at this stage occurs to leaves, which become twisted and light green to yellow in color and are burned at the tip within one or two days after freezing. A strong odor of dehydrating vegetation may be present after several days. Injury at this stage slows growth and may reduce tiller numbers, but growth of new leaves and tillers usually resumes with warmer temperatures.

In the jointing stage, wheat can usually tolerate temperatures in the mid to upper 20’s with no significant injury. If temperatures get into the low-20’s or lower for several hours, there can be some injury to the lower stems, the leaves, or the developing head. If it is windy during the nighttime hours when temperatures reach their lows, this increases the chance of injury.

Whether actual freeze injury takes place depends on the low temperature reached, how long the temperatures stayed that cold, temperatures gradients in the field, wind speed, canopy density, and other microclimate factors. Soil moisture is another factor that is usually important in determining freeze injury.

One general rule is that producers should not make any quick decisions about the condition of their wheat crop after a freeze. It will take several days of warm weather following the freezes to evaluate the condition of the crop and its yield potential. Even if some of the main tillers are injured or killed, producers should wait to see if enough other tillers have survived to compensate for the lost yield potential. Patience is the key.