The optimal corn seeding rate for any situation will depend on the anticipated environment and how the hybrid responds to that environment. Thus, optimum seeding rate depends on the hybrid (genotype, G) and the interaction with the environment (E), in something that researchers refer to as the G x E interaction. Producers can look back to their corn crop from the previous growing season, or wait until the current growing season is nearly complete, and evaluate whether the population they used was adequate. Another factor that sometimes we neglect to mention is the effect of management practices (M). Planting date, row spacing, and crop rotations can also exert some influence on the yield response to plant population.

Individual hybrids can respond differently, but the following guidelines may help in deciding if current seeding rates need to be adjusted. If you look back at last season and determine that more than about 5% of the plants were barren or if most ears had fewer than 250 kernels per ear, the population may have been too high. If there were consistently more than 600 kernels per ear or if most plants had a second ear contributing significantly to grain yield, the population may have been too low.

Don’t be too concerned if a half-inch or so of the ear tip has no kernels. If kernels have formed to the tip of the ear, there may have been room in that field for more plants contributing to grain yield. Again, "tipping back" will vary with the G x E x M interaction. Potential ear size and potential number of kernels (1,000 to 1,200 per ear) are set before silking, but the actual final number of kernels is not determined until after pollination and early grain fill (lack of fertilization and early abortion of grain number).

Always keep the long-term weather conditions in mind. The drought that affected much of Kansas in 2011 and 2012 made almost any population too high for the available moisture in some areas. Although it’s not a good idea to make significant changes to seeding rates based only on what happened recently, it is worthwhile taking into consideration how much moisture there is in the soil profile and the long-term forecasts for the upcoming growing season.

If you think weather conditions will be moderately favorable for corn this year, stay about in the middle to upper part of the range of seeding rates in the table below. If you do not think growing conditions will be good enough to make up for dry subsoils, you might want to consider going toward the lower end of the range of recommended seeding rates, with the caveat that if growing conditions improve you will have limited your top-end yield potential.

The recommended planting rates in the following table attempt to factor in these types of questions for the typical corn growing environments found in Kansas. Adjust within the recommended ranges depending on the specific conditions you expect to face and the hybrid you plan to use.

The following recommend planting rates are from the K-State Corn Production Handbook.

As a final note, drought-tolerant (DT) hybrids arrived on the market within the last couple years, and there are questions about whether changes in seeding rates are needed with these new hybrids. We are preparing a summary of our K-State research evaluation of DT vs. non-DT corn hybrids at different site-years around the state (West, North Central, Eastern locations). From the evaluation performed in these site-years (last 3 years) evaluating diverse seeding rates, hybrids, and water usage, we have found differences in yield when DT corn hybrids were compared with non-DT materials. Still, the most important point, as presented in the figure below, is that the yield response at plant-scale to plant population is similar for DT vs. non-DT corn hybrids (the slope is equal for both). Thus, a change in plant population doesn’t seem to be needed when this new corn hybrid technology is employed. 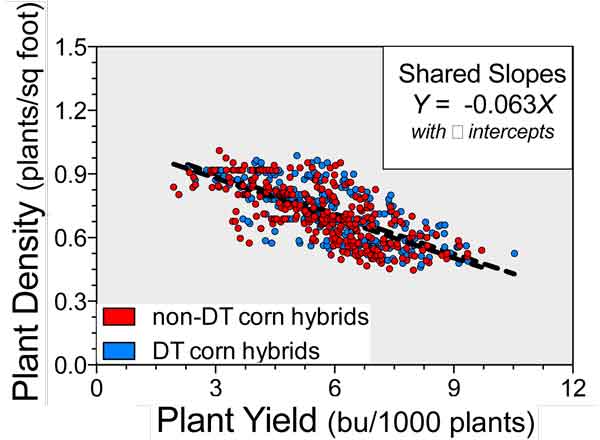 Figure 1. Plant-scale association between plant density or plant population (plants per square foot) and the plant yield (in bu per 1,000 plants) [Based on K-State research by Eric Adee, Kraig Roozeboom, Alan Schlegel, and Ignacio Ciampitti].