This next article in the World of Weeds series highlights common sunflower, also known as annual sunflower or wild sunflower (Figure 1). 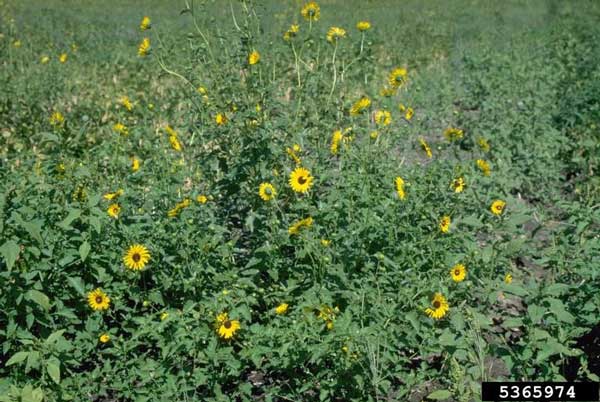 Common sunflower (Helianthus annuus) is native to North America, although it is not thought to be the direct source of cultivated sunflower, which was reintroduced from Russia. Common sunflower is a summer annual that emerges relatively early (mid-March) and can be found in fields and roadsides throughout the continental United States. Other closely related species, including prairie sunflower, sawtooth sunflower, stiff sunflower, and Jerusalem artichoke are generally not as widely distributed.

Common sunflower usually grows at least three feet tall, but can reach up to ten feet or more in height. The thick stem is covered hairs, making it feel rough (Figure 2). Leaves are oblong to somewhat heart-shaped with toothed margins. Both the upper and lower leaf surfaces have hairs that make them feel rough and the upper surface has three prominent veins. Leaves are opposite on the lower portions of the stem, but become alternate in the upper portions of the plant. 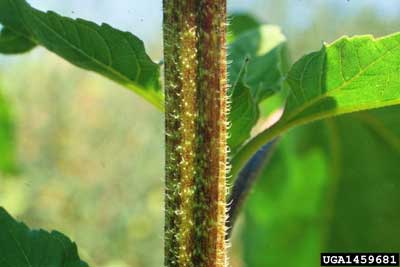 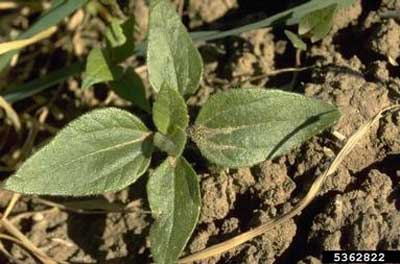 A single plant will produce about 20-35 flower heads in late summer. The yellow ray flowers are about 1 to 2 inches long and surround red to brown disk flowers that are held in a receptacle that is about 1.5 inches across. Seeds are produced inside fruits called achenes, which are wedge-shaped and about 0.25 inches long with colors ranging from white to gray to brown with black mottling.

Common sunflower seeds are eaten by many kinds of birds and small mammals. It has some forage value when young, but has the potential to accumulate nitrates. Common sunflower produces allelochemicals that inhibit the growth of other plants. Native Americans are said to have used all parts of the plants and modern research suggests some potential for medicinal uses.

There are several herbicides that provide excellent control of common sunflower, many of which contain 2,4-D, atrazine, glyphosate, or a Group 2 (ALS-inhibiting) herbicide. In some situations, the effectiveness of and ALS-inhibiting herbicide may be reduced due to herbicide resistance. Some effective products are listed in Table 1, with an indication of crops in which they can be used. Remember, additional information can be found in the KSRE 2020 Chemical Weed Control Guide and always consult the product label.

Stay tuned for the next World of Weeds article coming out in April! Feel free to send Dr. Lancaster or Kathy Gehl (kgehl@ksu.edu) an email if you have a special request for a future article.