With wheat heading and flowering in southern Kansas and moving into the flagleaf and boot stages in other parts of the state, it is an important time to scout for wheat diseases.  Here we recap the reports that have been coming in throughout the state and expected disease development given recent weather.

Stripe rust has continued to advance north, although incidence is trace in northern Kansas counties with no reports in the upper canopy (Figure 1) We have updated the stripe rust risk map to include favorable weather conditions over the past week (Figure 2). This integrated risk incorporates stripe rust observations, favorable weather conditions (including moisture and temperature), and crop area. Counties in south-east, east-central, and south-central Kansas remain at the highest risk for stripe rust development in the upper canopy. In last week’s eUpdate, we walked through important considerations for fungicide applications to control stripe rust. 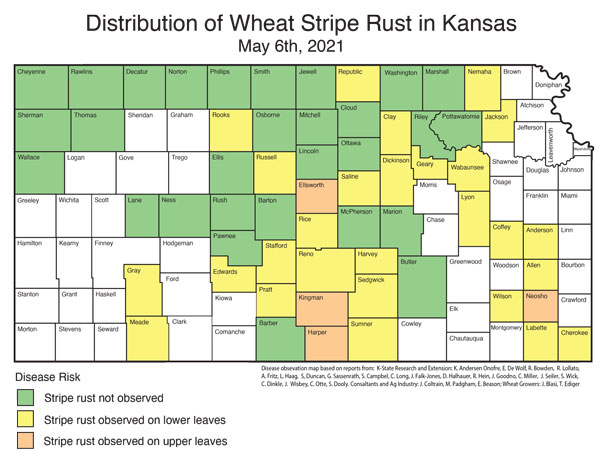 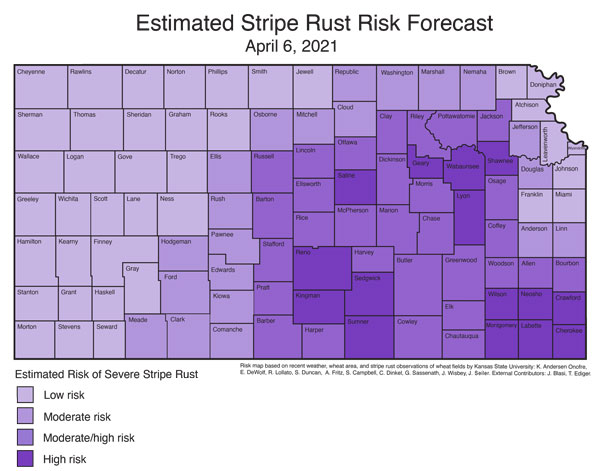 Leaf rust has been confirmed at very low levels in Kansas as of this week (Figure 3). Leaf rust can be distinguished from stripe rust by spore color and pustule distribution on wheat leaves. Leaf rust spores are typically brown (unlike the characteristic bright orange for stripe rust) and also do not develop in “stripes” on leaves (Figure 4). It is not uncommon in Kansas to see both of these rusts on the same plant, or even leaf. Many fungicides that are excellent for stripe rust control are also excellent for leaf rust control. Please review the following document for more information on fungicide efficacy: http://www.bookstore.ksre.ksu.edu/pubs/EP130.pdf. It is a good idea to review variety resistance to these two diseases because some varieties that are more resistant to stripe rust are less resistant to leaf rust https://bookstore.ksre.ksu.edu/pubs/MF991.pdf. 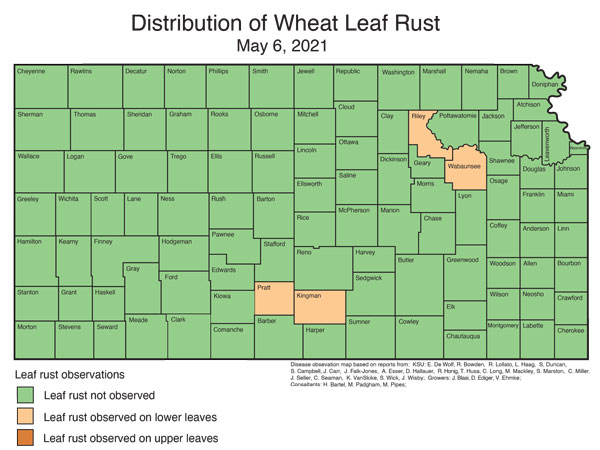 There have been an above average number of fields with wheat streak mosaic virus this year (Figure 5), mostly in the central and western portions of the state. It is important to remember that fungicide will not provide any control for viral infections. Even for the highly trained eye, it can be difficult to differentiate symptoms of wheat viruses. Wheat streak mosaic virus symptoms can be easily confused with other viruses, such as barley yellow dwarf virus. Multiple viruses can also be present in the same plant. Samples can be submitted to the K-State Plant Diagnostic Clinic for verification of viral diseases. 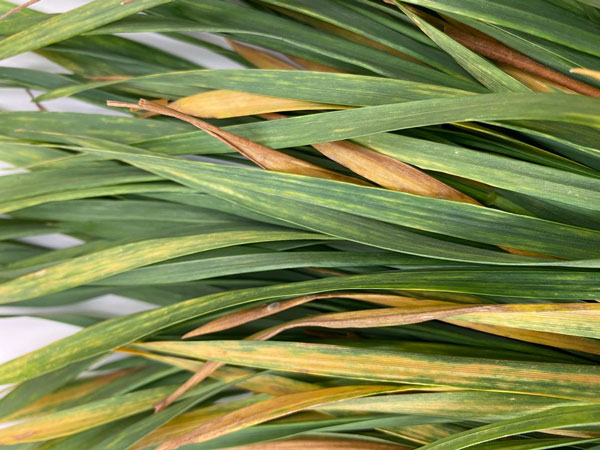 Fungicide applications for Fusarium head blight control should be made at the start of flowering for optimal control, but research has found that applying a few days after early flowering can still provide adequate control when there is high disease pressure. Fungicide is most effective when applied to varieties that are known to be susceptible. Currently Caramba 0.75 SL, Proline 480 SC, Prosaro 421 SC, and Miravis Ace SE are labeled for control of Fusarium head blight and have performed well in independent tests conducted by Kansas State University and collaborating institutions.

More information about these and other products can be found here: https://bookstore.ksre.ksu.edu/pubs/EP130.pdf

It is important to review not only how well a fungicide works against a disease of concern, but also label restrictions. Many fungicides have harvest restrictions and cannot be applied past a certain growth stage (for example, Feekes 10.5.4) or a certain number of days prior to harvest (pre-harvest interval). Please review all label recommendations before application to ensure compliance. 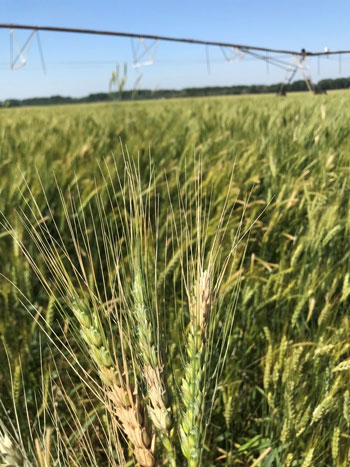 Figure 6. Symptoms of Fusarium head blight typically are visible at the soft dough stage of development. This photo was taken during the 2020 season. Photo: Kelsey Andersen Onofre, Kansas State Research and Extension.