Canola yields at most K-State Research and Extension trial sites were greater than average in 2019. As canola weathered the wettest May on record, ideal flowering and grain filling temperatures produced dense canopies filled with numerous pods. As a result, canola trial yields were quite high even though the deck was stacked against the crop for the tail end of the growing season.

Canola trials were seeded into optimum soil moisture conditions following early September rainfall. After emergence, several rounds of October rainfall thinned plant stands but overall they were more than adequate going into the fall and winter months. Winter temperatures were mild in the southern parts and cold in the northern parts of the state. The winter was characterized by several periods of cold temperatures followed by warming trends. There was very little winterkill observed in the variety trials.

Nonetheless, some unseen damage was done to plants by the repeated freeze/thaw cycles. As plants began to add flowers and then pods and seeds, it became apparent that a few trial sites and producer fields were dealing with severe crown damage. The freezing and thawing caused physical damage to the plant crown (base of the stem at the soil line) allowing fungicide to enter and rot out the interior of the stem. These weak stems then succumbed to lodging. The lodging was worsened by overly saturated soils in May. In some cases, the lodging was so severe that crops could not be harvested because producers couldn’t get in the field quick enough.

The lodging appeared to be the worst in south central Kansas and was field, and often, variety specific. One observation was that hybrids handled the saturated soils better than the open-pollinated (OP) varieties. This is likely due to the hybrids being larger, more robust plants with greater rooting mass and stiffer stems. Certain trial sites, such as Hutchinson, did not see any lodging despite receiving over 50 inches of precipitation from July 1, 2018 to June 30, 2019. The plants at this site were smaller going into the winter months and may not have been affected by the overwintering damage to the crown. In general, because of the lack of winterkill and optimum grain filling, the hybrids out yielded the OP varieties.

Trial sites for the canola breeding program were harvested at Belleville, Garden City, Hutchinson, Kiowa, Manhattan, and Norwich. Cultivar averages ranged from the upper 20s at Belleville to nearly 80 bushels at Garden City. The Belleville site was affected negatively by winter weather, saturated soils, and a slow spring green up. At Garden City, only 1.29 inches of irrigation water was applied, with 19.3 inches of precipitation falling during the growing season. Kiowa, Manhattan, and Norwich saw moderate to severe lodging in the open-pollinated trials. Hutchinson provided the highest yields recorded in the long history of testing winter canola at the trial site.

The high yields were obviously a positive outcome in 2019 as we were reminded what the yield potential of winter canola can be when planting conditions are favorable, moisture is plentiful, and temperatures are mild during the reproductive stages. We have better knowledge of what the lodging tendencies are of winter canola when soils are saturated. This information provides us with a means for making better variety recommendations and advancements. Canola does not like “wet feet” so planting on soils that are well-drained and not prone to ponding or flooding is important. 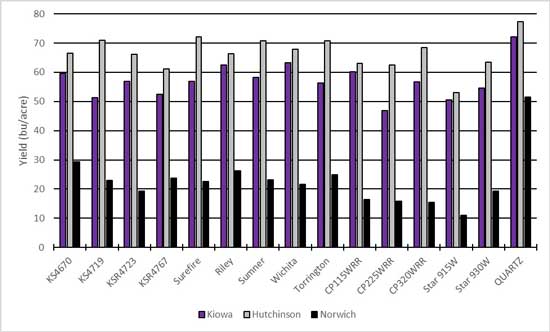 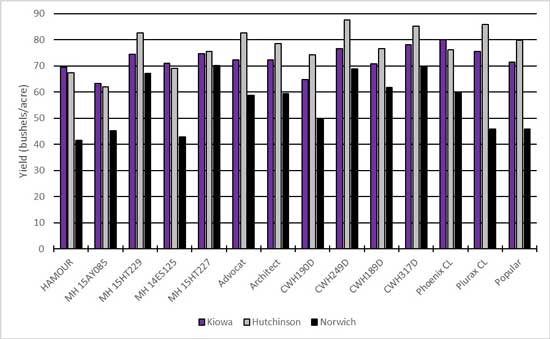 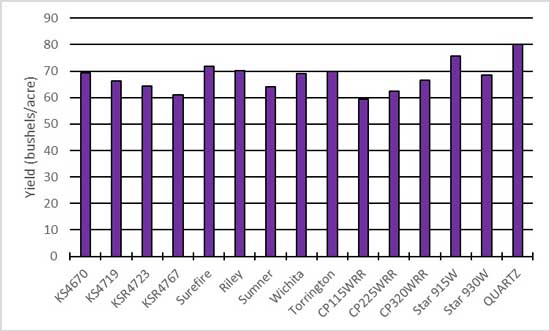 Figure 3. Yield results for the Garden City OP NWCVT in 2019. There is no statistically significant difference between varieties for yield. 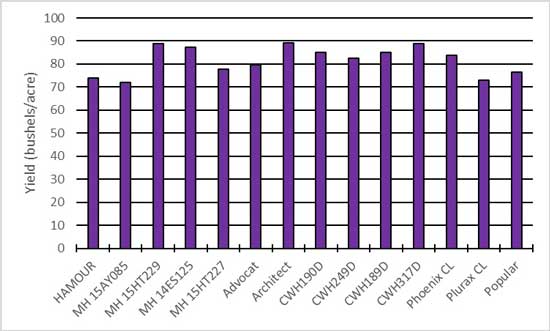 Careful variety selection is very important for successful winter canola production. Watch future Agronomy eUpdates for additional trial site results and a discussion to help with variety selection. We will also discuss the progress on converting a portion of the K-State canola breeding program to hybrid parent line development.