With the wheat crop moving into the flag leaf stage in central Kansas, and heading in the south, now is a critical time to assess the need for a foliar fungicide application. Scouting efforts from across Kansas have reported several new occurrences of stripe rust this week, although incidence remains extremely low in many counties such as Russel, Ellsworth, Saline, Rice, and Geary (Figure 1). 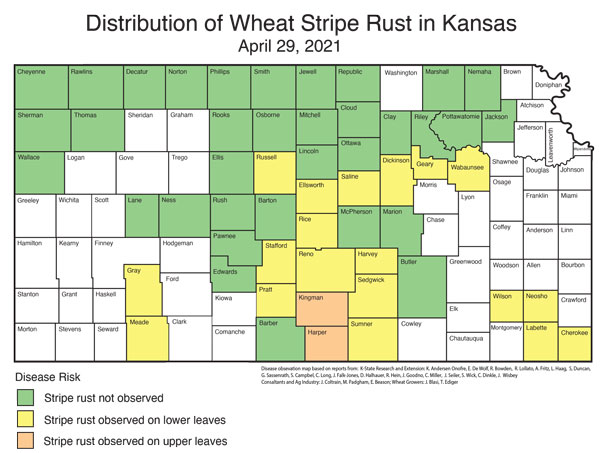 Stripe rust is most yield-limiting when it advances to the upper canopy, particularly the flag leaf. The risk of stripe rust causing yield loss is a function of three things:

Here we integrate current stripe rust reports, risk due to recent weather conditions (relative humidity and rainfall), and crop growth stage to assess the current risk of severe stripe rust in Kansas (Figure 2). The high-risk regions (dark purple) correspond to regions where weather has been particularly suitable for stripe rust establishment, and where the pathogen has been detected for sufficient time. The risk in other parts of the state may change as the season progresses and as more favorable weather events accumulate. 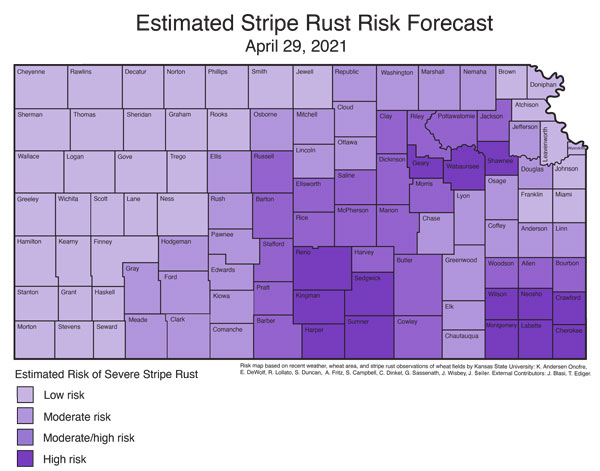 Deciding on a fungicide application to control stripe rust

Scouting is a critical first step for stripe rust control. Stripe rust can be identified by characteristic orange lesions that form in straight lines on mature plants (Figure 3). When you run your finger over a stripe rust pustule, the orange spores will be easily dislodged. 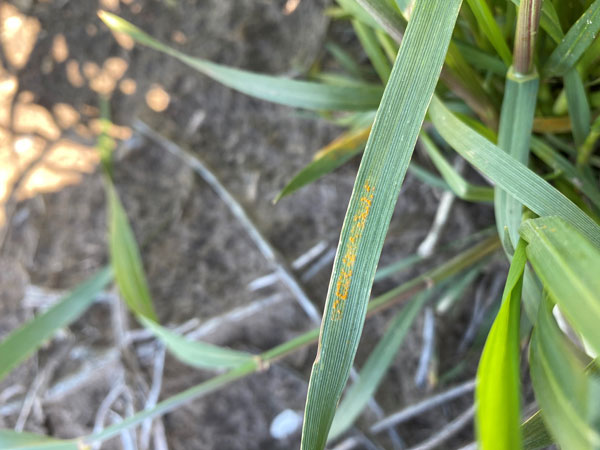 Fungicide applications are most beneficial when the level of disease in the field is below 10% severity. University research has demonstrated that applications that protect the fully emerged flag leaf (between Feekes 8 and Feekes 10) are most effective. See this K-State publication for additional information about growth staging wheat: https://bookstore.ksre.ksu.edu/pubs/MF3300.pdf. Applications applied prior to flag leaf emergence will not adequately protect the flag leaf or the head. Always check and follow product label recommendations to ensure full compliance with growth-stage limitations and pre-harvest intervals.

There are many products that are rated very good or excellent for stripe rust control (http://www.bookstore.ksre.ksu.edu/pubs/EP130.pdf), but it is important to know that fungicides in the strobilurin family (Group 11) are not as effective when applied as single product after symptoms have already appeared.

The products listed in the K-State fungicide efficacy publication will generally provide at least 14-21 days of protection. This can vary between products and is also influenced by environmental conditions.

The decision to apply a fungicide should be balanced with the yield potential of the crop and current grain price. Fields with the potential to yield greater than 40 bushels per acre should be prioritized for a fungicide application.