The actual consequences of this temperature drop should be field-specific, depending on the region within the state and several other factors. The snowfall amount and moisture level in the topsoil will be important to help buffer possible injuries resulting from cold temperatures. When more than 2-3 inches of snow is on the soil surface, it helps protect the wheat crop by buffering temperature changes in the surface soil. Topsoil moisture is very variable across the state, with topsoil (2-inch depth) percent of saturation ranging from 17% in Garden City to 93-98% in southeast Kansas mesonet.ksu.edu/agriculture/soilmoist). Where the soil is dry, it will cause the soil to have a lower thermal buffer capacity, compared to a moist soil, and winter injury might be more pronounced. 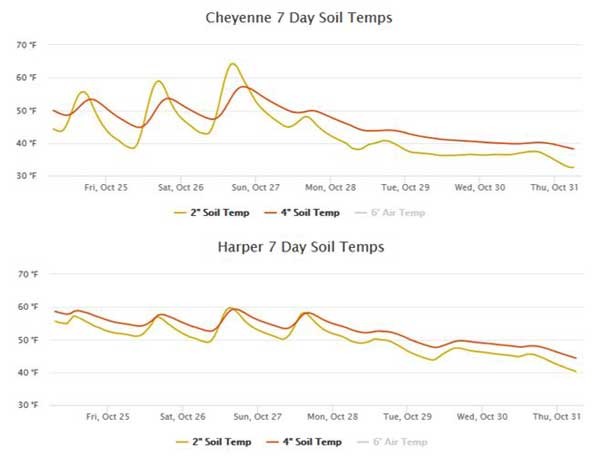 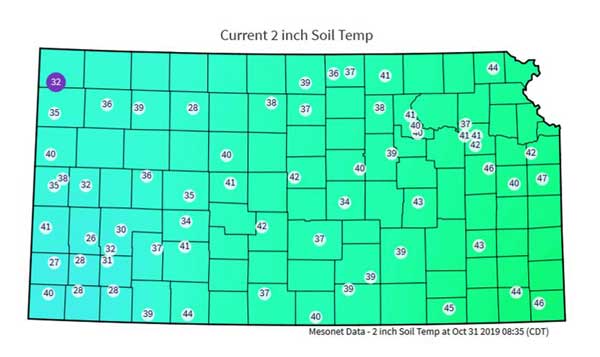 Possible exceptions could include fields planted in heavy no-till residue, where the furrow might not have been closed properly at sowing, or where there was not good seed-soil contact. Under these circumstances, the lack of furrow closure results in a less protected seedling (and in some fields, crown) which might be more exposed to cold temperatures (Figure 3). Producers are encouraged to start checking for possible injury on lower portions of the fields and especially in no-till fields with heavy residue in the near future, but no immediate damage will be apparent. The cold temperatures also will be more likely to cause injury to wheat if the plants were showing drought stress symptoms and soil temperature might have fallen below those shown on Figure 2, as dry soils will get colder more easily than wet soils. Additionally, the drier and looser the seed bed soil is, the greater the potential for the planting to be exposed to cold temperatures resulting in injury. Meanwhile, firmer and moister soils should help to minimize rapid fluctuations in soil temperatures allowing the wheat to better withstand cold temperatures. 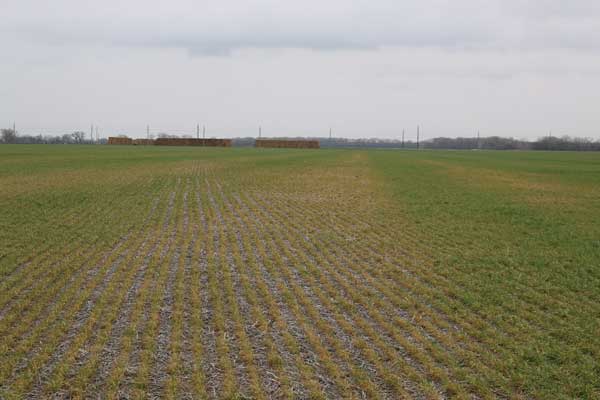 Figure 3. Effect of soybean residue on wheat cold damage. Yellow portions of the field correspond to greater residue left by the combine at soybean harvest and resulted in poorer seed-soil contact at wheat planting. As a consequence, the plants are more exposed to colder temperatures and potential injury. Photo provided by Romulo Lollato, K-State Research and Extension.

Another factor affecting wheat’s response to the cold is whether the wheat had time to become properly cold-hardened. It is important to remember that a large portion of the Kansas wheat crop was planted late, after soybean harvest. Therefore, it is still too early to suggest that the wheat has been cold-hardened. In fact, many fields have not even emerged at this point or are just now starting to emerge.

If fields were affected, the first symptom will be burndown of the wheat from these cold temperatures as shown in Figure 3. If the wheat was bigger-than-normal, the plants may look “rough” with a lot of brown, dead-looking foliage on the soil surface. That doesn’t mean the plants are dead. The important factor will be whether the crown below the soil surface remains alive. Having a well-developed secondary root system will help the plants survive. As temperatures did not drop as low in the central portion of the state, the concern with possible cold injury is not as great as fields that recently emerged in northwest Kansas.

The extent of the unusually large and rapid drop in temperatures is a concern in certain scenarios described above. In fields that were planted earlier, if the wheat did not develop sufficient cold-hardiness, it will be more susceptible to injury from the recent cold snap.