As wheat growers evaluate their wheat stand, some may be considering replanting fields yet this fall. The most likely cause of poor or uneven emergence for many fields is a severe lack of precipitation prior to planting and in the following days. If dry soils are the cause of the problem, replanting will not bring many benefits unless the seed has partially germinated and perished before emerging. It is very important to dig into the soil and evaluate the seed to determine the cause of poor emergence. Wheat seeds may still be germinating and emergence may occur in the next few days, depending on temperatures. Thus, if seed are still hard and viable, or if germination started to occur recently and there are very short coleoptile emerging from the seed (Figure 1), the best advice is to leave the field alone. 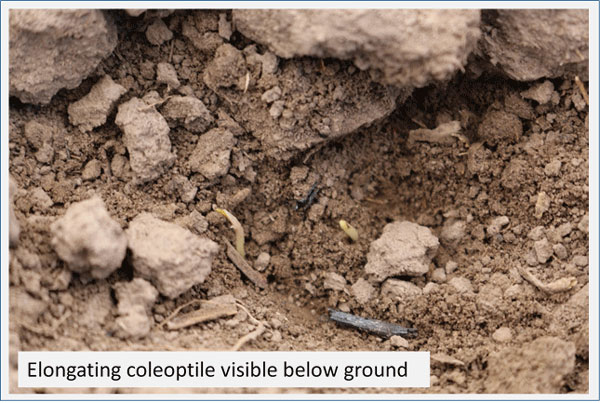 When deciding whether to replant wheat fields it is helpful to consider these factors: i) stand uniformity, ii) percent stand compared to the target stand, iii) replanting date, iv) weed control, and v) insurance cutoff date.

In fields in which topsoil moisture was variable at time of planting, some seeds might have germinated and emerged where soil moisture was sufficient, while others might have started the germination process but perished where soil moisture was too low, while others might not have started the germination process at all. This will cause poor wheat emergence across the field, with sometimes recognizable field patterns associated with the moisture distribution in the soil. In this case, stands might be relatively uniform in poorer-drained areas where moisture might have accumulated, but non-existent in better-drained areas, leading to a high within-field variability. In this case, growers should check for seed viability in areas with poor emergence. If the seed is still viable, then the field should be left alone. If the seeds imbibed water, started to germinate but perished, then these portions of the field should have top-priority for replanting. If a stand is sparse in areas that already emerged, producers should also consider replanting these areas with lower seeding rates to bring final population closer to the desired stand, as discussed below.

Finally, some producers might also consider insurance cut-off dates, as they need to ensure their crop is planted prior to this date. For insurance purposes, crops planted before the final planting dates as specified by the USDA are insured with no reduction in coverage or adjustment to premium. The final plant date is already past for parts of western Kansas, which means that producers replanting after this date will have a reduction in 1% coverage per day until the end of the late-planting period. For wheat, the late-planting period often occurs about 15 days after the final plant date.