Winter wheat is beginning to break dormancy, and the Kansas Mesonet has introduced a new tool to help track the crop development: Wheat First Hollow Stem (https://mesonet.k-state.edu/agriculture/wheat/hollowstem/). This page tracks soil temperature to calculate wheat growing degree days (GDD) associated with first hollow stem occurrence. This tool employs a wheat growth model developed by Oklahoma State University and the Oklahoma Mesonet, which was validated for wheat growing conditions experienced in south central Kansas during the 2016-2021 growing seasons. The output of the model provides the probability of first hollow stem occurrence (current and historical) both for early- and late-maturing wheat varieties.

Wheat first hollow stem is the stage when there is about 1.5 cm of hollow stem growth underneath the developing wheat head (Figure 1). This is the beginning of stem elongation and, for winter wheat, it occurs in the spring after winter dormancy. This stage is important for dual-purpose wheat growers (grazing plus grain) because it is the optimal time for grazing termination to maximize forage yield while minimizing grain yield losses. The rationale is that up to this point, grazing cattle only remove foliage and consequently, yield losses due to grazing are modest. However, beyond this point, grazing can remove the developing wheat heads, increasing the potential for yield reductions due to grazing. 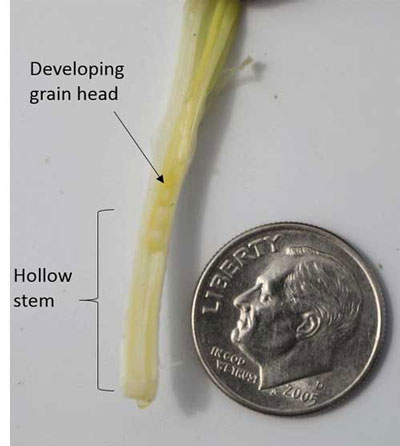 Figure 1. Wheat plant reaching the first hollow stem stage of growth, characterized by approximately 1.5 cm (or roughly the diameter of a dime) of hollow stem underneath the developing grain head. Photo by Romulo Lollato, K-State Research and Extension.

There are two different models currently in place at the Kansas Mesonet, one representing the probability of occurrence of first hollow stem for an early-maturing variety, and another for a late-maturing variety. The calculations employed in this tool are identical to those employed at the Oklahoma Mesonet, with the single difference that the model representing varieties of medium maturity in Oklahoma is used to represent varieties of late maturity in Kansas.

Table 1. Probability of first hollow stem for early and a late-maturing varieties based on accumulated soil temperatures at the 4-inch depth beyond 31°F. Table courtesy of Oklahoma Mesonet.

We acknowledge that these models were developed in Oklahoma. To ensure their accuracy in Kansas, we tested their performance against six years of first hollow stem data collected near Hutchinson, Kansas. The model performance was excellent, with r2 = 0.92 and root mean square error of 4.1 days (Figure 2). 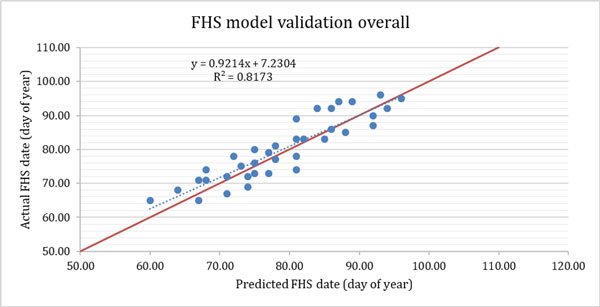 Figure 2. Predicted versus actual first hollow stem dates (day of year) for data collected near Hutchinson, KS, during 2016-2021. For each year, model performance was compared against 25, 50, and 75% probabilities for early- and late-maturing varieties. Note that the Oklahoma model for medium-maturing varieties is used for late-varieties in Kansas.

How might you benefit from the Kansas Mesonet Wheat First Hollow Stem page?

Here are a few examples: