This article from our team of scientists at the Kansas Mesonet and the Weather Data Library offers a short month-by-month summary of the weather across Kansas in 2020. Looking back serves as a reminder of how variable the weather can be across the different regions of Kansas. Climate and weather is the driver behind many agricultural management decisions. The Kansas Mesonet and the Kansas Weather Data Library offers many resources and tools to help make the best decisions possible when dealing with the ever-changing Kansas weather.

Mild and wet were the characteristics of January 2020. Despite the overall warmer-than-normal pattern, winter weather was an important feature for the month. There were significant travel issues due to freezing fog and freezing rain on almost a weekly basis. Statewide average precipitation was 1.67 inches, 17th wettest in 126 years. Two locations set 24-hour precipitation records for January: White City, with 1.14 inches on the 11th and Liberal with 1.42 inches on the 28th.  Liberal also set a 24-hour snowfall record for January with 10.5 inches on the 24th. 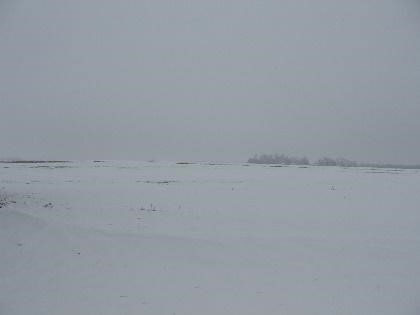 A Valentine Day storm was one of the highlights of the month. The storm began on the 12th and continued through the 14th, bringing snow and freezing rain across much of the state. Relatively mild temperatures were displaced by a vigorous Artic front. In Manhattan, the high for the 13th was 34oF and the low was 3oF. On the 14th, the high was just 16oF. 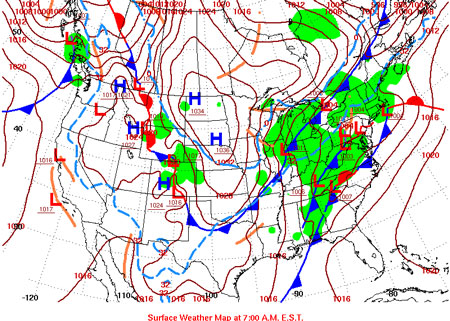 Hail events are not always dominated by large hailstones. While there were some large stones in the March 30th event in western KS, the most notable feature was a large swath of small stones near Wallace, KS. The swath was so large that it was visible from satellite. At ground level, the stones covered the highway and had to be plowed – similar to a winter snow event. 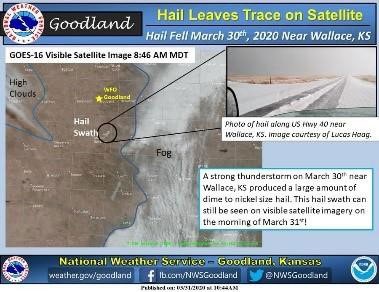 Freezing temperatures are not unexpected in April.  However, the cold temperatures observed during the week of April 13-17, 2020 were particularly unwelcome. Mild temperatures in the first three months of the year meant that winter wheat had emerged from dormancy. Areas where the wheat had begun to head were particularly vulnerable to damage as the low temperatures dipped into the 20s.  Actual losses that can be attributed to the event are difficult to determine, given all the other challenges the crop faced this season. 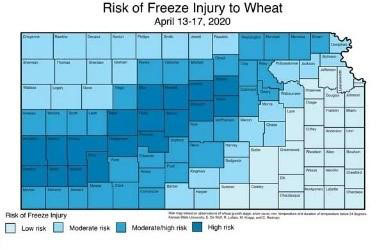 A split rainfall pattern divided the state in May. The western divisions received very little precipitation. In contrast, the Southeast Division had the 17th wettest May in the 126-year record (since 1895).  This added to the already wet start to the year, with 2020 ranking as the 3rd wettest. The continued moisture, following the wet years of 2018 and 2019 meant continuing problems with flooding and planting in the spring. 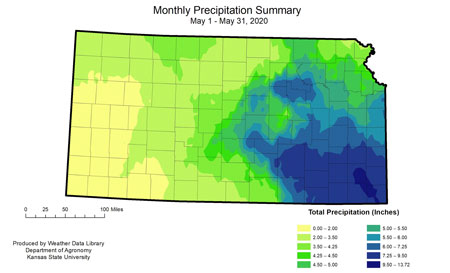 June was hot and dry across the state.  It ranked as the 17th warmest and 25th driest June since available instrument records (since 1875 or 126 years). The temperatures were driven by warm overnights, many of which set records and an early month heat wave. Statewide there were 19 new daily record high temperatures.  In contrast, there were 48 new record warm minimum temperatures. 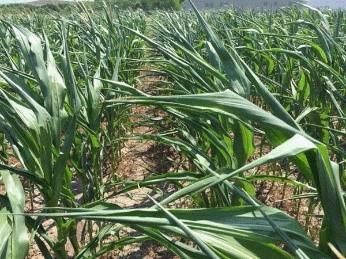 During a relatively quiet storm season, July 11th will stand out. On that day, thunderstorms started along the KS/NE border and marched south to OK.  Golf ball to grapefruit size hail was reported along the way. By the end of the event, 49 severe hail reports were recorded in Northeast Kansas. A severe hailstone is one that is greater than 1 inch in diameter. The largest stone had a measured diameter of 4.5 inches. 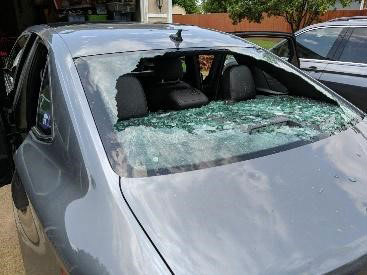 August marked the beginning of a downward trend for precipitation for much of the state. This drought reached full capacity in November with as much as 69% of the state in drought. While drought continues for many parts of the state at the end of the year, this was a poorly timed drought for crops. Late maturity corn/sorghum struggled especially in the southwest. In addition, poor soil moisture availability for the winter wheat establishment led to variable stands going into overwintering with overall performance rated poor. 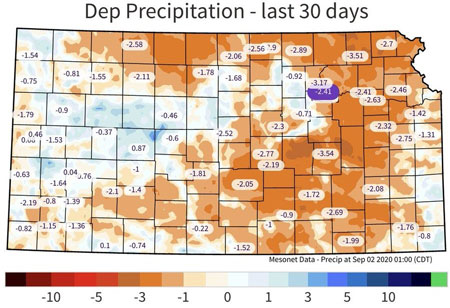 A potent storm system provided much needed rain to portions of central/east Kansas but also much below normal temperatures and even snow to northwest Kansas. Temperatures set record lows at several locations with as much as nine hours spent below freezing – critical for immature corn/sorghum crops. This was the earliest freeze on record for some locations as well. The next period of freezing temperatures wasn’t observed until the end of the month. 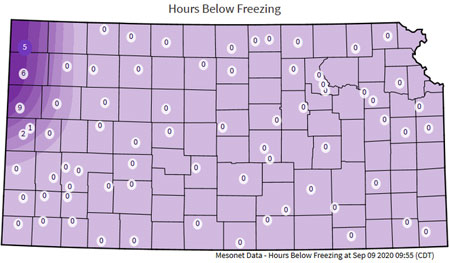 Dry conditions dominated the month, with the only significant moisture arriving with a strong cold front at the end of the month. That front brought a rapid switch from highs above 90 to lows below zero in a 48-hour period. Twenty-nine locations set October daily snowfall records. The southeast saw the first frost of the season, accompanied by freezing rain. 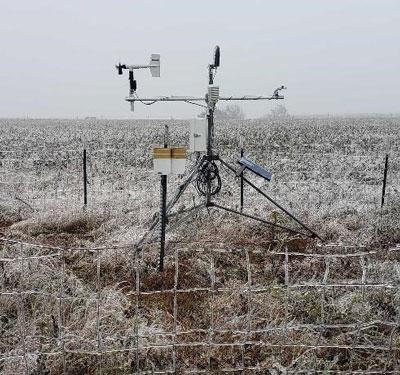 Strong winds and warmer temperatures were headliners. Several strong wind events associated with vigorous cold fronts produced widespread 55-60mph winds (7th and 14th). In addition, severe thunderstorms in south central Kansas produced damage and 70mph winds on the 24th. Temperatures for the month were well above average with many record high temperatures broken on the 4th. 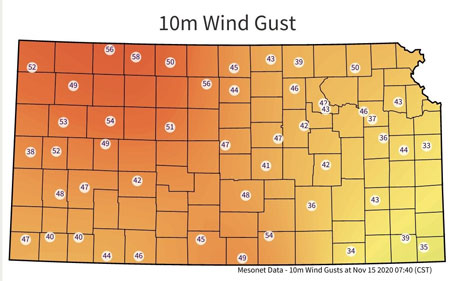 Dual southern Kansas snowstorms occurred in early December (3rd and 12th). Both dropped significant amounts of heavy wet snow with highest totals of 12-14” in Meade Co with 5-6” in surrounding areas per storm. Some areas near Ashland saw over 24” of snow total. A final, weaker system dropped another widespread 2-3” across much of the same regions on the 15th. 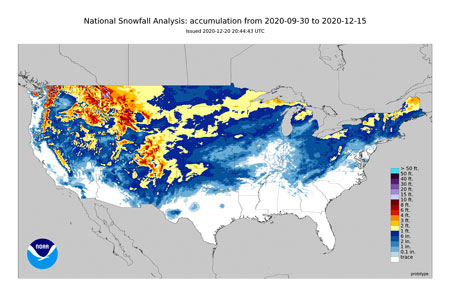 Figure 12. Seasonal snow accumulation ending on Dec. 15 with over 2 feet of snow in Meade County. (NOAA).