Buckbrush, also known as coralberry (Symphoricarpos orbiculatus) and western snowberry, also known as wolfberry (Symphoricarpos occidentalis) are native rhizomatous shrubs found in Kansas.  Both species occur on rangelands and as an understory species in woodlands. Buckbrush occurs in the eastern 2/3 of Kansas, whereas western snowberry grows in western and northcentral Kansas.  These two species are known to grow together in northcentral Kansas (Figure 1).

Vegetatively, these two species can be difficult to distinguish. Both species have somewhat ovate-shaped leaves, but the leaves of western snowberry are larger (Figure 2).  In the fall, buckbrush produces a red fruit, whereas the fruit of western snowberry is white. Buckbrush is taller, up to 6 feet in height, and produces stolons (runners). 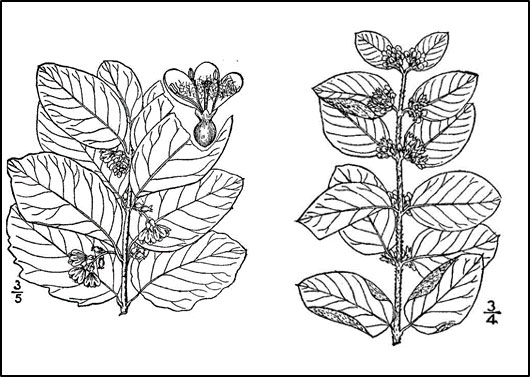 Buckbrush and western snowberry are generally considered undesirable in areas being grazed by cattle. Sheep, goats, and deer are more likely to browse these two species. The fruit and seeds are eaten by birds and small mammals. Dense colonies of buckbrush can shade out more desirable species used for grazing.

Top removal of buckbrush and western snowberry after the plants have leafed out and the nonstructural carbohydrates stored in the roots are at a low level can be an efficient control. A single mowing is apt to cause resprouting, thus multiple cuttings at the appropriate time (generally early to mid-May) is required for control. Prescribed burning for 2-3 consecutive years is also effective.

Herbicides can also be used to control buckbrush and western snowberry. The best time to spray occurs after the plants are fully leafed out, but before the leaves are too mature (generally mid-May to early June). A number of herbicides can be used, but 2,4-D low volatile ester formulations at 1.5 to 2 lbs/acre are usually quite effective. Chaparral can be used alone at 3 oz/acre, but I prefer adding 2 pint/acre 2,4-D to 2 oz/acre Chaparral. Grazon P+D can also provide acceptable control. Caution should be used if treating cool-season grasses with Chaparral. Grazon P+D is a restricted use pesticide. Remember, always read the label when considering the use of herbicides.