As we face an extended period of high temperatures in central Kansas, often exacerbated by strong winds, farmers should remain conscious of how heat stress can elevate the risk posed to summer crops by various pests. Although pests are also negatively impacted by extreme high temperatures, their feeding and reproduction will accelerate with increasing temperature until that point is reached. A plant's 'tolerance' of pest damage is mostly due to its capacity for compensatory growth and productivity, which enable it to sustain some loss of leaf area without any impact on final yield. All crops become less able to tolerate pest damage as moisture becomes limiting and high temperatures shut down photosynthesis. For example, alfalfa regrowth is at risk under dry conditions, because adult weevils can kill plants by feeding on the stems while the plants are unable to outgrow the damage. Dryland soybeans are also acutely vulnerable when seedling plants remain stunted by drought, but feeding by insects like mites and thrips continues. Later on, mature plants become less able to compensate for damage as they enter reproductive stages, and when damage directly affects reproduction as opposed to vegetative structures. Thus, late-maturing fields of soybeans tend to be more susceptible to late-season outbreaks of defoliators such as green cloverworm or soybean webworms, whereas earlier plantings will have already filled most pods.

Sorghum midge, Stenodiplosis sorghicola, is a pest that has been slowly expanding its range northward, and is no longer limited to southern Kansas along the Oklahoma border. Many sorghum farmers in Kansas are not yet familiar with this pest, or its potential to inflict serious yield loss and test weight (Figure 1). Adult females lay eggs at the base of sorghum florets at anthesis and larvae feed within developing kernels, destroying them (Figure 2). The generation time is only 2-3 weeks in hot weather, so many generations can occur in a single season as the midge moves north. A field that is infested in early stages of flowering may sustain damage from more than one midge generation. Because the larvae feed internally, there is no rescue treatment and control depends on scouting of fields at onset of flowering. This is accomplished by knocking heads into a white bucket and looking for the small, orange or reddish adults. Ten heads should be sampled at each of five different locations in a field; the treatment threshold is one midge per head. Please refer to the Kansas Sorghum Insect Pest Management Guide for treatment options. 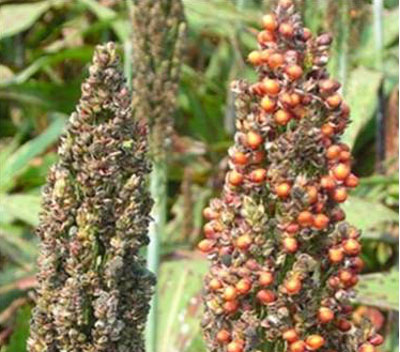 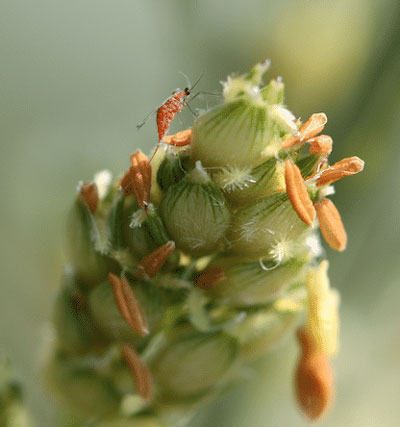 Headworms are another possible concern as sorghum begins to mature (Figure 3). Older, 'generic' insecticides are often selected for headworm control given their lower cost, but these are becoming less effective against both fall armyworm, Spodoptera frugiperda, and corn earworm, Helicoverpa zea, as the insects have been exposed to these modes of action for many years on many different crops. In addition, resistance to the Bt traits expressed in corn ears appears to be widespread in H. zea, which means we might expect increased numbers of migrant moths arriving from the south. There are now cost-effective alternatives to synthetic insecticides for control of these pests, sold commercially under the names Heligen® and Fawligen®. These products are biological pesticides, formulations of virus diseases specific to each of these insects that will not harm beneficial species, or indeed any other insects. They are more of a prevention than a cure, but if applied in early stages of an infestation, a single treatment can be very effective. Please refer to the current Kansas Sorghum Insect Pest Management Guide for more on these and other treatment options. 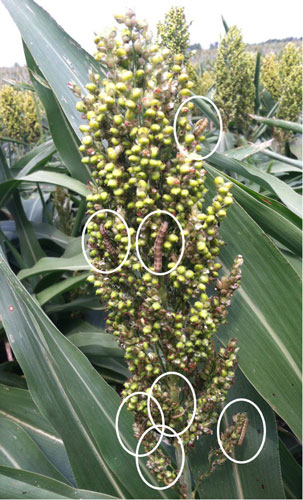 The sugarcane aphid has recently been reported from some fields in Oklahoma, but populations remain isolated and small. We should now refer to this pest as the 'sorghum aphid', as its scientific name has been changed to Melanaphis sorghi, and it is not the same species that infests sugarcane. We do not expect economically significant infestations of sorghum aphid in Kansas to ever become as widespread as they were 5 or 6 years ago, but it is still a good idea to scout any late-planted fields that will be most at risk, in case we receive any large flights of winged aphids later in the summer.

We have also been seeing late flights of corn leaf aphid in recent years, which are not usually a concern, but might exacerbate any developing infestations of greenbugs or sorghum aphids if they colonize flag leaves and co-infest heads during grain fill. Transform and Sivanto remain the materials of choice if any threshold populations are detected. There is now a smart-phone app developed by OSU Extension that streamlines the sampling procedure for this pest considerably. You can find more information about it here: https://www.youtube.com/watch?v=sYx1y1h8Et8. Note that a plant is only considered 'infested' if it has more than 50 aphids on a leaf, as any colonies smaller than this have very low survival probability.