Cropland can be quite susceptible to wind erosion under some conditions, particularly through the winter. Cooler-than-normal temperatures and drought conditions may limit vegetative growth and cover. Burning, tillage, and little crop residue can create a particularly serious hazard. Care should be taken to maintain crop residue through reducing tillage and careful to not remove too much residue through grazing or haying, such as leaving strips unhayed (Figure 1a) or capturing forage sorghum regrowth to occur (Figure 1b). 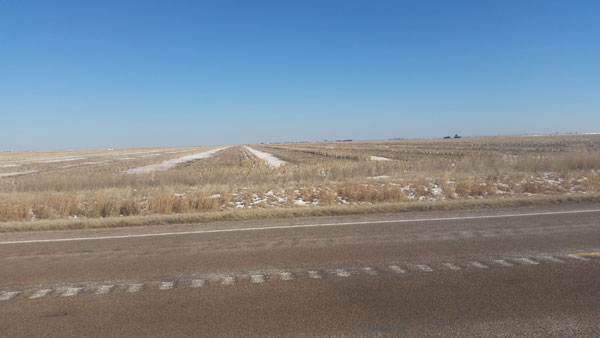 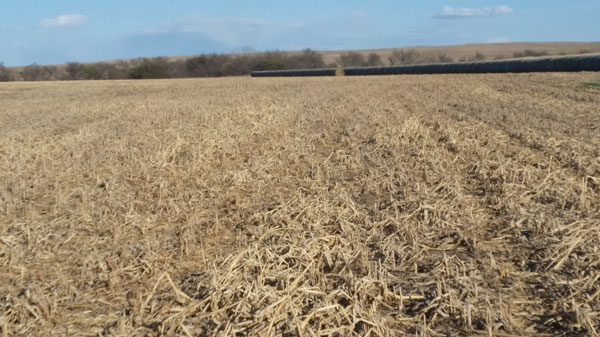 Winter wheat and other fall-planted crop fields also may be susceptible during periods of low cover in the winter and early spring. This can result in fields blowing out (Figure 2). This is particularly true during drought. Marginally productive cropland may not produce sufficient residue to protect against wind erosion. In addition, overgrazed or poorly vegetated rangeland may also subject to wind erosion. Recent wind conditions have been conducive to erosion (Figure 3a), reduced visibility making for dangerous driving conditions (Figure 3b), given the peak wind gusts that have been recorded in Kansas over the last few days (Figure 4). 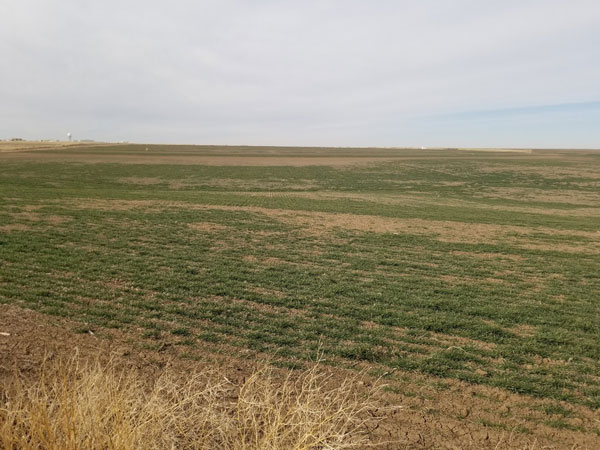 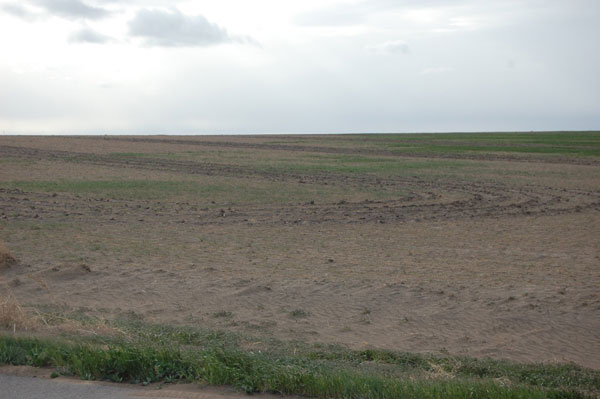 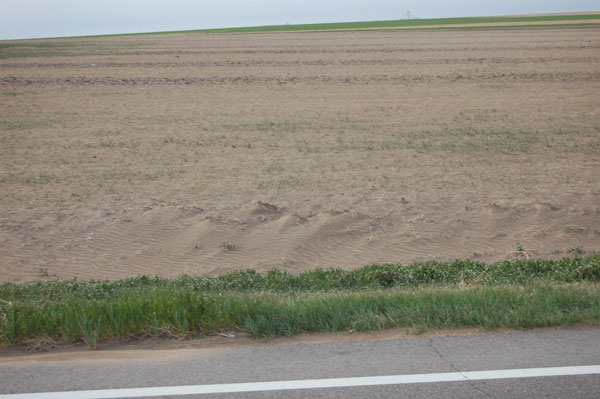 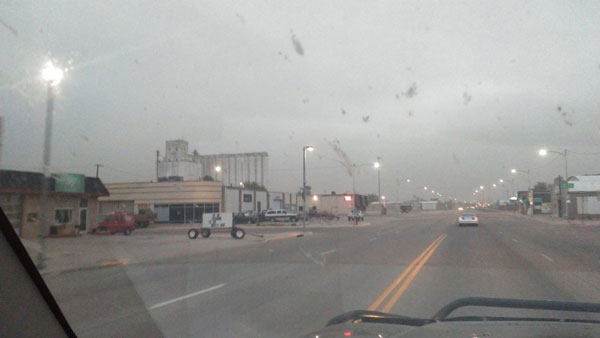 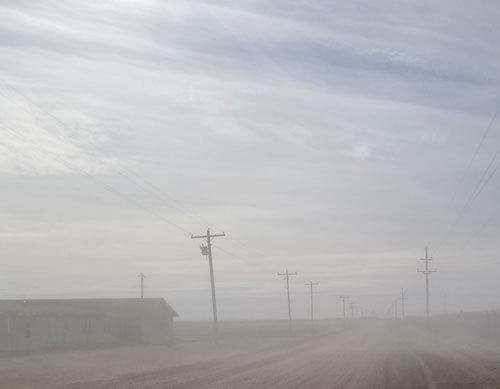 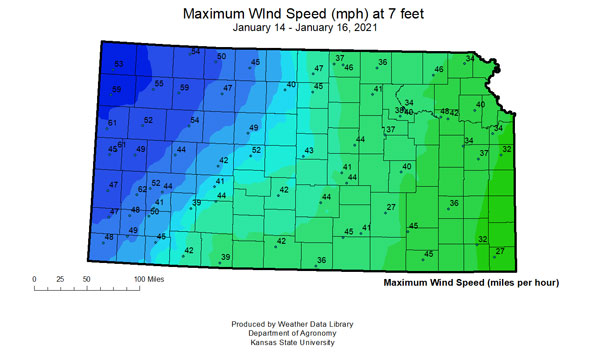 Emergency tillage. Emergency tillage is a last-resort method that can be effective if done promptly and with the right equipment. The goal of emergency tillage is to make the soil surface rougher by producing resistant clods and surface ridges (Figures 5 and 6). A rough surface reduces wind speed. The larger clods and ridges resist movement and provide traps to catch the moving soil particles.

If the erosion conditions recur or persist, a second, deeper chiseling should split the first spacing. Tillage passes should be made perpendicular to the direction of the prevailing wind causing the erosion. First tillage passes should be made on the upwind side of blowing soil to stop the advancing front, and slow the time the furrows are filled in with blowing soil (if tillage is done on the downwind side the furrows will fill rapidly). 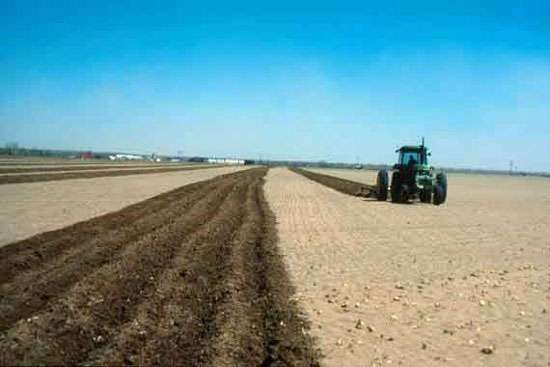 Figure 5a. Emergency tillage across 50 percent of the field. Photo courtesy of USDA-ARS Engineering and Wind Erosion Unit, Manhattan, Kansas. 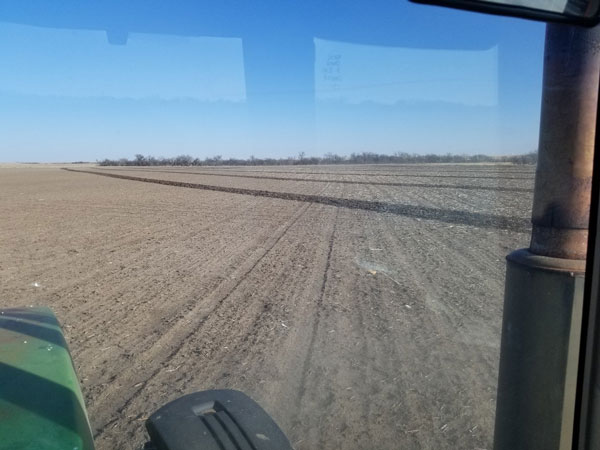 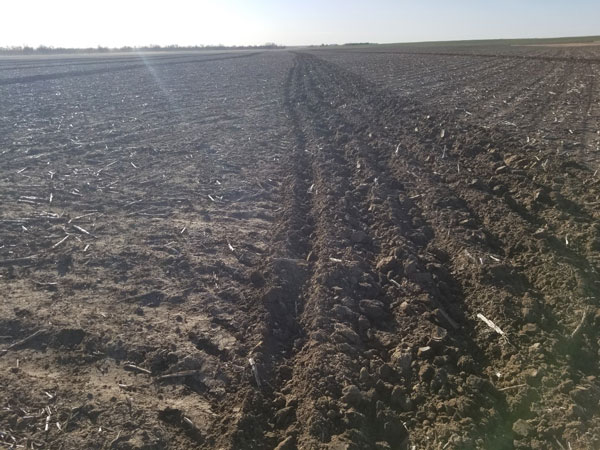 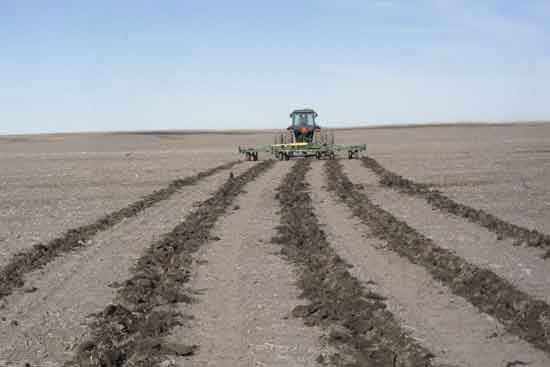 Performing emergency, clod-forming tillage across the field is effective in reducing wind erosion. The degree of success of emergency tillage is highly dependent on climatic, soil, and cover condition. It is often not necessary to till the entire field, but rather, it is very effective to perform emergency tillage passes across 50% of the field (till a pass, leave a pass, repeat). Narrow chisel spacing (20 to 24 inches) is best for this method. Emergency tillage is most effective if there is some subsoil moisture and clod formation.

If 50% of the area has been tilled and wind erosion persists, the omitted strips can be emergency-tilled in a second operation to make result in full-cover tillage. If a second tillage pass is needed, it should be at a greater depth than the first pass. Under some conditions 50% of the field may not need to be tilled, but 20-30% tilled might be effective if there is some residue cover and lower potential for erosion. Wide-chisel spacings are used in the full-field coverage method. The space between chisel grooves can be chiseled later should wind erosion persist.