If corn has been planted, standing water or saturated soil conditions in areas of a field can produce impacts now or later for corn. Periods of early-season water saturation can cause immediate problems for small corn plants, and can have season-long implications as well. Hopefully, the affected areas are small and confined to spots that are low-lying or poorly drained.

After corn emerges, saturated soils inhibit root growth, leaf area expansion, and photosynthesis because of the lack of oxygen and cooler soil temperatures. Yellow leaves indicate a slowing of photosynthesis and plant growth. Leaves and sheaths may turn purple from accumulation of sugars if photosynthesis continues but growth is slowed. Corn plants can recover with minimal impact on yield if the plants stay alive and conditions return to normal fairly quickly. 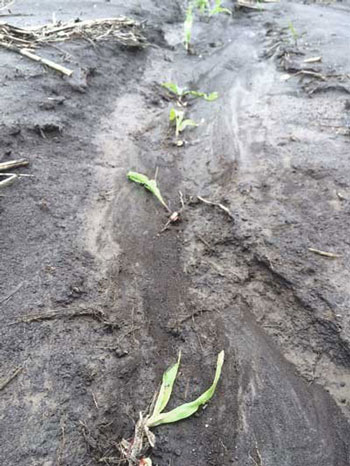 Although root growth can compensate to some extent later in the season, a saturated profile early in the season can confine the root system to the top several inches of soil, setting up problems later in the season if the root system remains shallow. Corn plants in this situation tend to be prone to late-season root rot if wetness continues throughout the summer, and stalk rots if the plants undergo mid- to late-season drought stress. Plants with shallow root systems also become more susceptible to standability problems during periods of high winds.

Young corn plants can tolerate only a few days of full submersion. In some cases, symptoms and stand problems seen late in the season may trace back to flooding when the plants were young. Before V6, when the growing point is at or below the soil surface, corn can survive only 2-4 days of flooding. Chances of plant survival increase dramatically if the growing point was not completely submerged or if it was submerged for less than 48 hours. After 48 hours of soil saturation, soil oxygen is depleted and critical plant functions (photosynthesis, water and nutrient uptake) are impaired.

Thus, young corn plants are more susceptible than corn beyond the V6 stage, when the plants are taller and the growing point is above the surface. Research has demonstrated yield reductions from early-season flooding ranging from 5% to 32% depending on soil nitrogen status and duration of flooding.

Temperatures can influence the extent of damage from flooding or saturated soils. Cool, cloudy weather limits damage from flooding because growth is slowed and because cool water contains more oxygen than warm water. Luckily, much of the flooded areas in the last couple weeks have stayed relatively cool. Warm temperatures, on the other hand, can increase the chances of long-term damage.

Silt deposition in the whorls of vegetative corn plants can inhibit recovery of flooded corn plants. Enough soil can be deposited in the whorl that emergence of later leaves is inhibited. A heavy layer of silt on leaf surfaces can potentially inhibit photosynthesis or damage the waxy surface layer of the leaf (cuticle), making the leaves subject to drying out. New leaves should not be affected if they can emerge normally. Ironically, what is often best for the silt covered plants is to receive a small shower to help wash off the leaves.

Flooding can increase the incidence of moisture-loving diseases like crazy top downy mildew. Saturation for 24 to 48 hours allows the crazy top fungus spores found in the soil to germinate and infect flooded plants. The fungus grows systemically in the plant, often not causing visual symptoms for some time. Symptom expression depends on the timing of infection and amount of fungal growth in the plant. Symptoms include excessive tillering, rolling and twisting of upper leaves, and proliferation of the tassel. Eventually, the both the tassel and ear can resemble a disorganized mass of small leaves, hence the name “crazy top.” 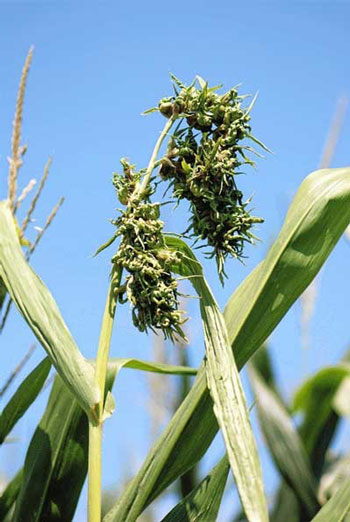 Saturated soils can also cause loss of N fertilizer by either denitrification (loss of N to the atmosphere, mainly as nitrous oxide gas) or leaching (movement of N beyond the rooting zone). For any of these losses to occur, N should be present in the mobile nitrate (NO3) form. Depending on the fertilizer application time and source, most of the N may still be in the stable ammonium (NH4) form. However, the conversion to nitrate happens quickly as soil temperature continues to increase. Under wet spring planting conditions, corn may respond to in-season N applications if a large portion of early-applied N is lost to these processes. If corn remains N deficient later in the season, expect considerably higher levels of stalk rot.

Another condition associated with extended periods of cool, wet soils is commonly referred to as cold weather crown stress. Internal stalk cells in the crown nodes can become “leaky” when cell membranes become chilled and oxygen is limited because of the saturated soils. Hybrids with “southern” genetics are more susceptible to this problem than are northern types. Plants may recover from this damage, but they will be much more susceptible to stalk rot later in the season if hot, dry temperatures occur since water and nutrients cannot be efficiently moved through the damaged crown. 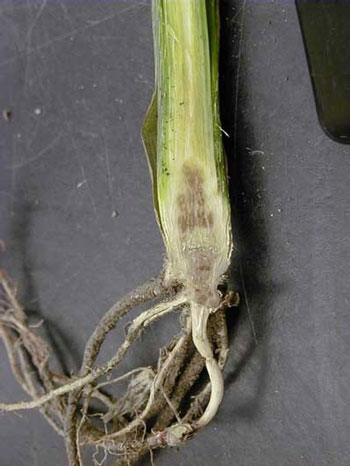 The best advice is to scout your corn after water drains from the fields. Check the appearance of new leaves and the standability of the corn.