Corn is entering reproductive stages in many parts of the state, particularly in eastern Kansas. One of the main challenges presented last week was the high temperatures, particularly the total number of hours with air temperature above 95 degrees F (Figure 1).

High nighttime temperatures during the reproductive period (at or after flowering) can reduce kernel number, and if later in the season, kernel weight. This effect can be explained as an increase in the rate of respiration, increasing the demand for sugar (energy) and diminishing its availability for supplying the growing kernels.

In addition, as experienced in many areas of Kansas, high nighttime temperatures tend to accelerate plant phenology (growth), but with overall lower plant efficiency in using available resources.

The effect of high nighttime temperatures will be exacerbated as corn is entering into the most critical growth period (a few days before flowering to grain filling). The consequence of high night temperatures will be reflected in reductions in kernel number (if timing of the stress was around flowering) and/or kernel weight (if timing of stress coincided with the grain filling period). 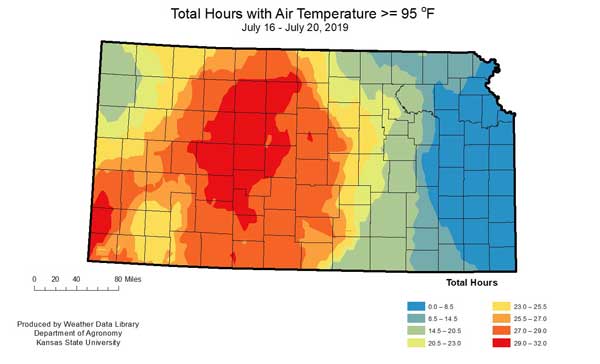 After a week of warmer and drier-than-normal conditions, the last four days have averaged much cooler than normal (Table 1).

Table 1. Summary of temperatures during the last 4 days, ending on July 25, 2019, organized by divisions for Kansas. 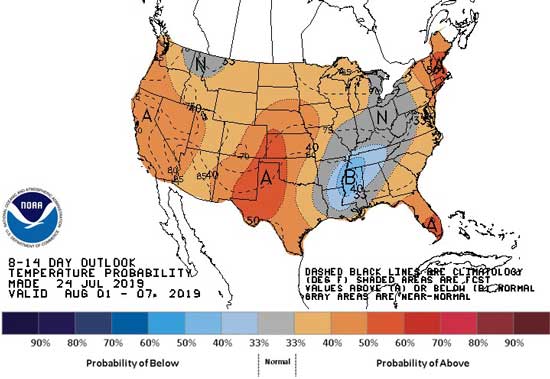 Soil moisture is another factor that can potentially impact corn in the next week(s) since corn is approaching the peak of water demand when it reaches flowering stage.

Unfortunately, the precipitation outlook favors a continuation of the drier-than-normal pattern through the same period (Figure 3). 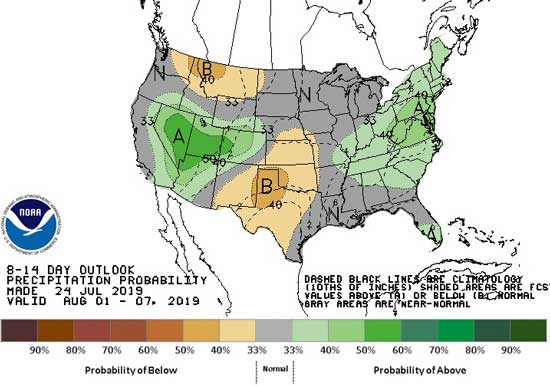 Combined with the drying soils (Figure 4), stress is most likely in the central part of the state. Warm temperatures, little precipitation, shallow rooting, and dry surface soils will combine to form an unfavorable environment for corn and soybeans in the critical reproductive stages. 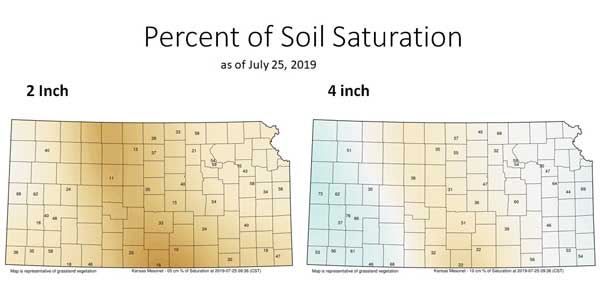 In summary, temperature will be a less relevant factor for negatively impacting corn yields and pollination time. However, quickly drying of soils, combined with the less positive precipitation forecast for the next 8-14 days, will impose potential drought stress conditions around flowering and during the beginning of the grain filling period. The effect of a “timing drought” during these development stages in corn could be reflected in reductions in kernel number and/or final kernel weight.