Since the end of June, precipitation has been sporadic and uneven across the state of Kansas. In the central and western areas of the state, several corn fields under dryland conditions have been suffering a combination of drought and heat stress. High temperatures have been more frequent since the first weeks of July, exacerbating the drought effects on corn fields.

The latest USDA Kansas Crop Progress Report and Condition (August 8, 2022) rated topsoil moisture as 33% very short, 40% short, with only 27% adequate and 0% under water surplus. Corn condition was rated 38% under poor or very poor conditions, 32% fair, 24% good, and only 6% under excellent conditions. This exhibits a great contrast with the soil moisture and corn crops condition at the beginning of the season. Compared to the USDA report of early July (July 5, 2022), topsoil moisture was rated as 17% very short, 30% short, 50% adequate, and 3% surplus; while corn condition rated only 11% as poor or very poor, 32% fair, 45% good, and 12% excellent.

Entering July, corn fields started to experience very dry and warm conditions with a large proportion of the early-planted acreage for this crop already moving from vegetative to reproductive stages, right at or after flowering time. Since the growing season is progressing very quickly due to warmer than normal temperatures, it is best to be prepared to take a close look for symptoms of drought stress.

Leaf rolling is probably the first visible corn response to drought. When this symptom is observed already very early in the morning (when the plants are supposed to be under the lowest environmental demand for water), this is an indicator of a severe water stress. Leaf rolling is a plant defense mechanism to reduce transpiration and plant canopy temperature. Under continuous drought for several days, it is expected to observe reductions in leaf expansion, and stem elongation rate, impacting plant height. 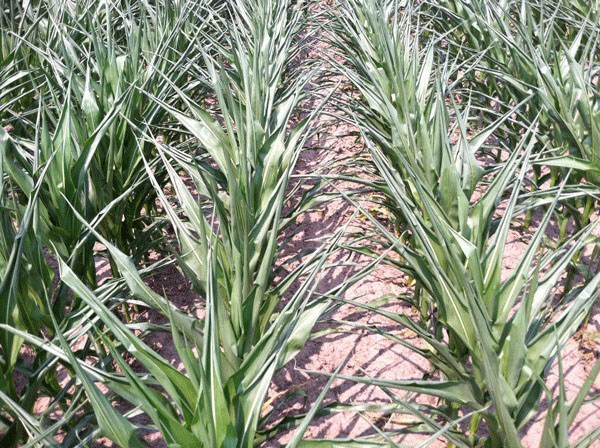 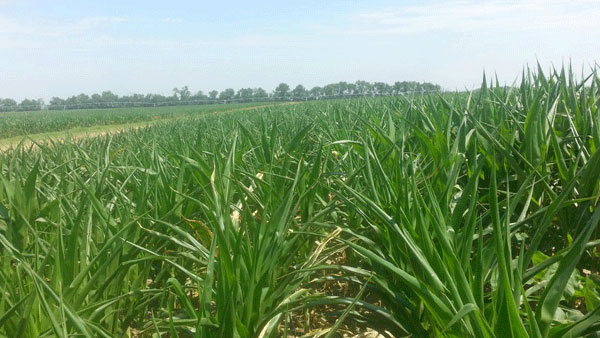 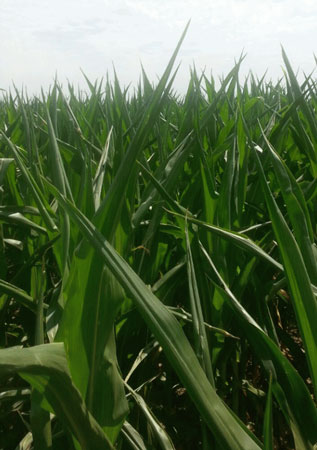 Shorter, less leafy plants are also among the most visible symptoms of drought in corn. In some cases, nitrogen movement within the plant and chlorophyll production could be negatively affected under water shortage. In parallel, smaller root systems are expected under drought conditions since the growth of all plant tissues (above- and belowground) will be impacted. The reduced plant growth is the combination of a reduction in the expansion of tissues as well as in the photosynthesis rates, which will result in overall less efficient crops. 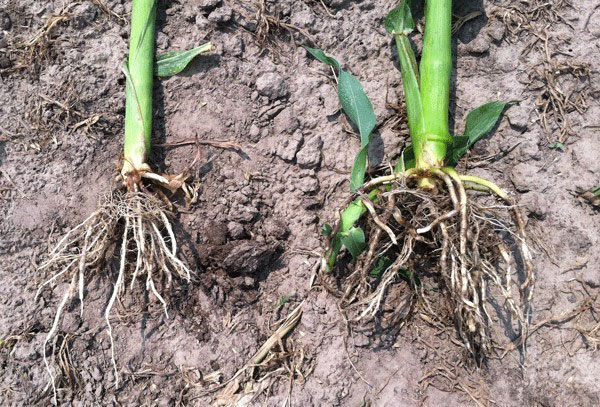 4. Pollination is concentrated in just a few days. In general, pollination takes place earlier and with a short duration under drought stress. High temperatures can also potentially impact pollen viability, reduced to a very short duration.

5. Even when pollination is effective, kernel abortion or cessation can still occur during blister (R2) and milk stages (R3), if drought (and heat) stress continues, producing the absence of grains at different portions of the ear. With kernels still aborting until several weeks after flowering.

Under extreme drought and heat stresses, plants may be barren, with no ears being formed at all, if conditions were severe well before pollination time. 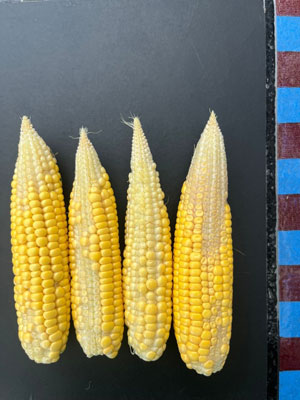 Overall, reductions in potential yield can be expected whether the stress occurs early (10-leaf to 15-leaf stages) or late (dough and dent stages) in the crop growing season, but with a larger impact on yields when concentrated around flowering time.

4. Management practices and other factors

There are several management practices that could accentuate drought stress symptoms including high plant densities, narrow row spacing, and excessive applications of fertilizer or manure that could produce big plants excessively increasing the water consumption before the most critical period for yield around flowering.

The specific impacts on grain yield can be estimated using the yield components approach (https://bit.ly/3v5v9aC) with more accuracy after flowering, when we have the main yield component, the number of kernels, practically defined. If stress is impacting the final number of kernels, and if conditions for the coming weeks continue to be on the dry side, yield reductions can be expected also due to poor grain-filling conditions that may reduce the grain weight.

It is highly recommended to scout your acres for drought and heat stress so you can make timely decisions.

Finally, if you would like to report drought impacts to your region, anyone can submit Condition Monitoring Observer Reports (CMOR). These can have substantial impacts on the drought monitor assessment for your locale and provide invaluable data for future research/analysis of water and/or climate status. You can submit reports here: http://go.unl.edu/CMOR and view other’s reports here: http://go.unl.edu/CMORMAP. To learn more about the Drought Monitor process, please visit https://bit.ly/3Q2UUke.