Double cropping after wheat harvest can be a high-risk venture. The available growing season is relatively short. Heat and/or dry conditions in July and August may cause problems with germination, emergence, seed set, or grain fill. Ample soil moisture in some locations this year could aid in establishing a successful crop after wheat harvest.

One major consideration before deciding to plant a double crop or cover crop after wheat is the potential for herbicide carryover. Many herbicides applied to wheat are in the sulfonyl urea herbicide family and have the potential to remain in the soil after harvest. If an herbicide such as Finesse, Glean, or Ally has been used, the most tolerant double crop will be sulfonylurea-resistant varieties of soybean (STS, SR, Bolt) or other crops. If you chose to use herbicide resistant varieties, be sure to match the resistance trait with the specific herbicide (not just the herbicide group) that you used. Less information is available regarding herbicide carry over potential of wheat herbicides to cover crops. There is little or no mention of rotational restrictions for specific cover crops on the labels of most herbicides. However, this does not mean there are no restrictions. Generally, there will be a statement that indicates “no other crops” should be planted for a specified amount of time, or that a bioassay must be conducted prior to planting the crop. A recent eUpdate article, “Herbicide carryover considerations when re-cropping damage wheat” (Issue 796, April 24, 2020), summarized the carryover potential of many herbicides applied to wheat.

Burndown of summer annual weeds present at planting is essential for successful double-cropping.  Glyphosate used to be effective, but if glyphosate-resistant kochia and pigweeds are present, alternative treatments such as paraquat may be required. Dicamba or 2,4-D may also be considered, if the soybean varieties with appropriate herbicide resistance traits are planted. 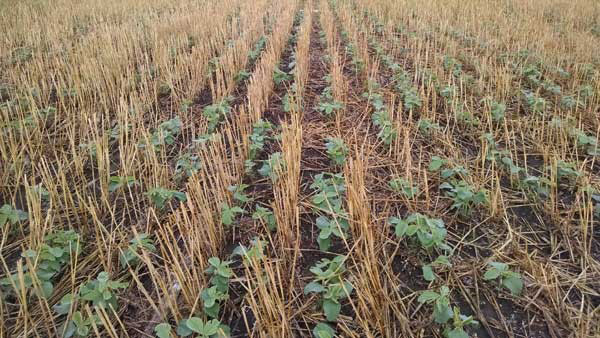 A new review publication explores the potential yield of double crop soybeans relative to wheat yield and the most limiting factors affecting the yields for double-crop soybeans. The link to this article is: https://bookstore.ksre.ksu.edu/pubs/MF3461.pdf