Wet conditions this spring could lead to some issues in corn that may start showing up over the next few weeks. For example, producers may be seeing corn that is falling over or flopping in the wind this season. Occasionally plants may be standing upright, but exhibit wilting or stunting symptoms.

To diagnose the problem, start by digging up some plants and examining the root system. Corn in the V4 to V6 stages and beyond should have a well-established secondary root system. These are larger and thicker than the primary roots. If the corn plants have not established a viable secondary, or nodal, root system, the problem is often termed “rootless” or “floppy” corn. 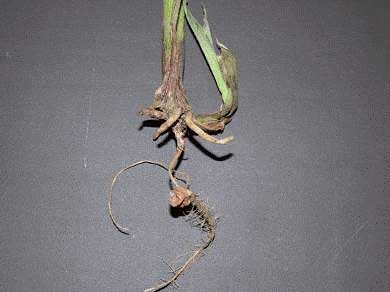 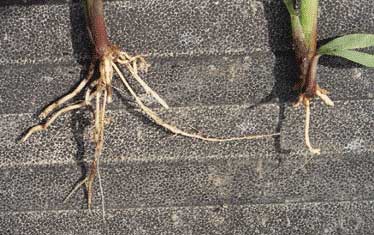 When corn germinates, the first roots to emerge from the seed are the primary, seminal, or seed roots. These roots support the plant through emergence and the appearance of the first few leaves. At emergence, exposure of the coleoptile to light will cause it and the mesocotyl to stop growth and will position the crown at ¾ to 1 inch or more below the soil surface. As the plant grows, the first four or five nodes do not elongate, keeping the growing point below the soil surface until V6 when the stem begins to elongate rapidly.

The roots that develop from these compressed nodes at the crown form the secondary root system. This is a bit confusing because this “secondary” root system is of primary importance for the rest of the life of the corn plant. It is called secondary because it is the second to appear chronologically. These secondary roots rapidly take over water and nutrient uptake and are important for anchoring the plant as it moves through the V4 to V6 growth stages and beyond. If something prevents establishment of these secondary roots, the plants can fall over or flop in the wind or the plants may be stunted or wilted.

Is there any hope for “rootless” or “floppy” corn? Possibly, depending on whether soils are able to dry out enough to provide good aeration for the roots. Even if plants have fallen over, new secondary roots can continue to form and establish a viable root system if soil aeration and moisture conditions are adequate. Inter-row lay-by cultivation to move soil around the exposed crowns can help if not too many plants have fallen over.