The July heatwave came at a particularly critical period for the Kansas corn crop this year. During this period the statewide average of corn silking/tasseling has eclipsed the halfway point. According to the USDA National Agricultural Statistics, the percent of corn reaching silking has increased from 47% last week to 61% as of July 24, 2022. This is the latest it has reached this percentage since 1995 (Figure 1). Most likely this was the result of late planting due to spring moisture. However, it meant that the corn was subject to extreme heat while in this vulnerable stage. 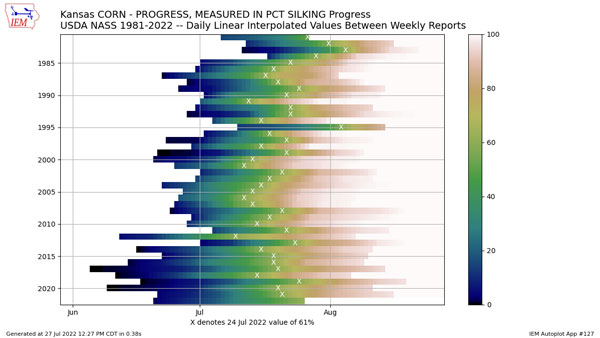 So far in July, temperatures have consistently reached 100°F  or more in many locations of the state (Figure 2). Both the Meade and Ashland Mesonet stations have been above the century mark over 65% of the days. To compound the stress concerns, overnight lows have also been above 70°F consistently as well (Figure 3). While the higher percentage of days with temperatures above 7 °F were further east than the highest afternoon maximums, there remains quite a bit of overlap in south-central and southeastern Kansas of unrelenting heat.  Areas in the southeast observed temperatures staying above 70°F for as much as 70% of the time in July thus far. Conditions have also been remarkably dry across the state during this period. 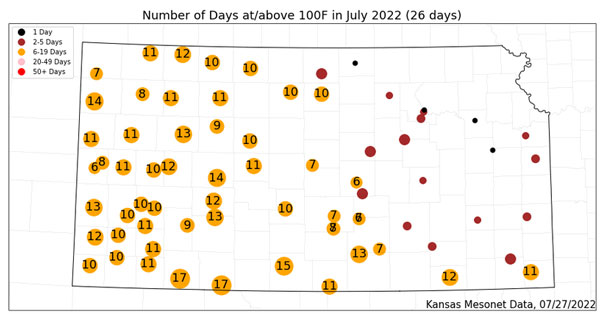 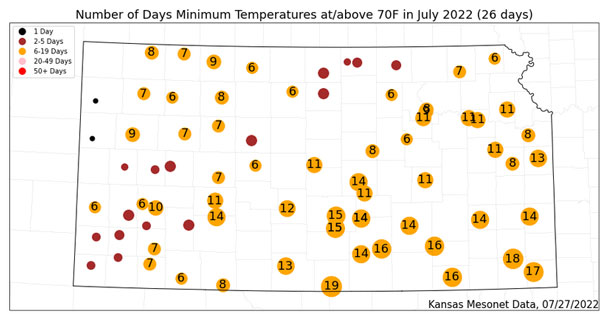 Heat stress will have more of an impact on corn at this stage of growth when combined with drought stress. Even in the absence of drought stress, heat stress alone can still increase the asynchrony between pollen shed and silk extrusion when corn reaches flowering time, ultimately reducing the final number of kernels (Figure 4). In addition, if stress conditions are prolonged, those effects will be reflected in a larger kernel abortion and impacts of the final size, kernel weight, negatively impacting final yields. 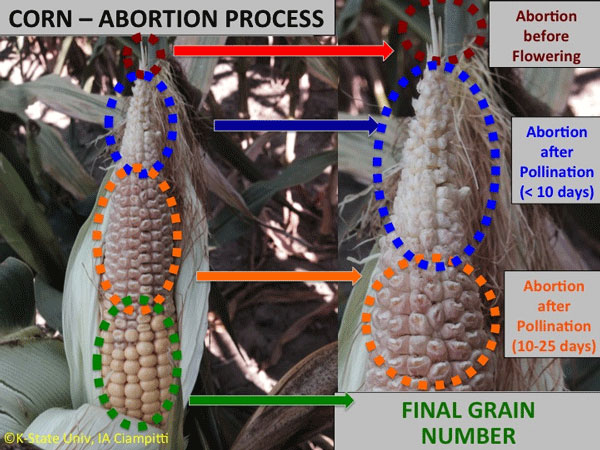 Figure 4. Ear abortion in corn from the combined effect of heat and drought stresses at the critical period around flowering. Photo by Ignacio Ciampitti, K-State Research and Extension.

The Kansas Mesonet has a useful tool that tracks growing degree accumulation for multiple crops.  With this tool, you can pick the planting/emergence date for the start of the interval. Selecting the graph will illustrate the growing degree accumulation for this season versus normal and the plant stage. You can access the page at: https://mesonet.k-state.edu/agriculture/degreedays/. You can also access the Maximum and Minimum temperature data here: https://mesonet.ksu.edu/weather/maxmin. Mesonet data updates in real-time with data from 79 weather stations.

Example of grain abortion from heat and drought stress

The following example depicts the occurrence of grain abortion resulting from a combination of heat and drought stress during various reproductive stages in corn plots at the KSU North Farm (Figure 5). The picture shows the upper section of the corn ears with several grains aborted. This grain abortion is due to multiple processes, including sterility of flowers, lack of pollination, pollination but lack of effective grain formation, and grain formation but late abortion (after pollination), all mainly due to heat and drought conditions. The failure of pollination is mainly due to an asynchrony between pollen availability for the last silks emerging (from tip of the ears). However, it also shows pollination failures at the middle and base of the ears, indicating issues with pollen viability due to heat stress (Stress Degree Days ~ 170-200 around R1).

Besides the heat stress starting right before VT stage, the crop also started to suffer drought conditions due to the absence of precipitations between June 29 and July 25.  This combined stress (both heat + drought) caused additional grain abortion during R2-R3 stages, even after a successful pollination (upper-middle section of the ears). As demonstrated on Figure 4, grain abortion can occur several weeks after pollination, affecting not only grain number but most likely maximum grain weight as well. 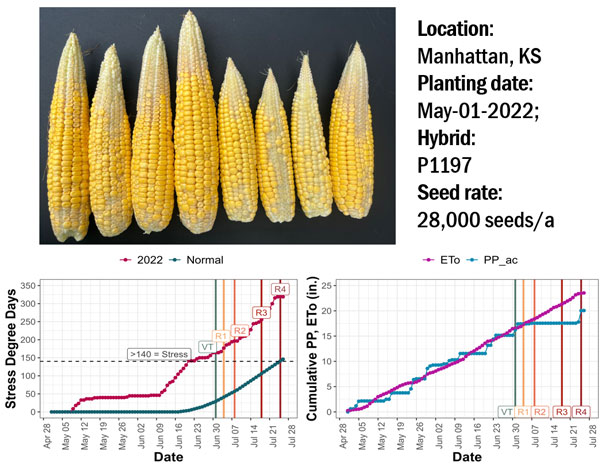 Stress conditions were very severe in parts of central, south central, and southeast Kansas, compromising yields and presenting a large impact on potential productivity. Farmers should scout their fields and perform yield estimates (https://bit.ly/3PJw9JN) and consider making a decision on the crop for the coming weeks. Stay tuned for more information on the effects of stress conditions for corn fields across the state.