2019 has been a challenging year for crop production, especially corn. The record-breaking rainfall amounts in May created havoc for corn production – flooding fields and delaying planting or replanting. While much of Kansas is in the pollination stage of corn, corn in southern Kansas that was planted timely and did not get flooded is in the midst of grain fill, so harvest is not far off (Figure 1). Producers spend considerable time and money to protect their corn yield. However, some of the biggest yield losses can occur during harvest operations. 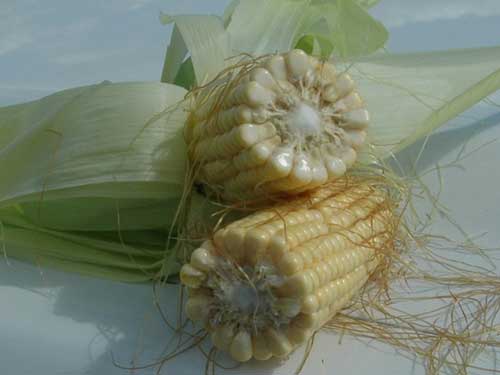 Figure 1. Corn that was planted on time and was not flooded has a good stand, with silking beginning in late June in southeast Kansas. Grain filling in 111-day corn in Labette County Kansas, July 12, 2019.  Photo by Gretchen Sassenrath, K-State Research and Extension.

Harvest inefficiency reduces overall yield and can cause future problems because of volunteer corn (Figure 2). Volunteer corn may have some value by increasing the soil organic matter, providing cover to reduce soil erosion, or providing potential forage for grazing livestock. However, volunteer corn may cause problems for wheat planting after corn harvest, or in a wheat-corn-fallow cropping system by using valuable soil moisture and nutrients needed to promote fall tillering in wheat. Volunteer corn can also provide a “green bridge” of vegetation for insects that can carry viral diseases in wheat. 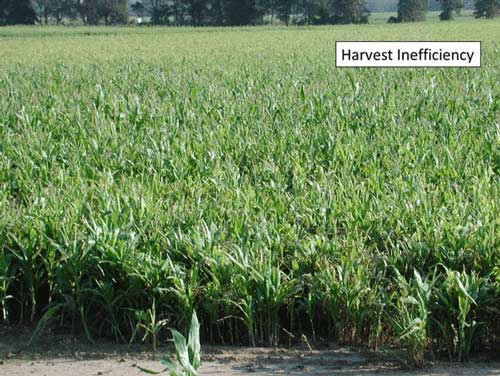 The biggest problem with having a dense stand of volunteer corn is that is indicates a significant loss of corn grain during the harvest operation. It will never be possible to harvest 100% of the grain. However, it is possible to improve the efficiency of harvest and increase the yield by paying careful attention to harvest operations. By taking steps to improve the harvest efficiency, grain loss can be reduced.

Several factors may contribute to poor harvest efficiency in corn. Most of the kernel loss that occurs at harvest time is due to mechanical limitations with combine settings. A combine performs three major actions during the harvest operation: picking, threshing, and cleaning. Grain loss can occur at each of these stages. A detailed description of harvesting efficiency can be found in the KSRE publication “Corn Production Handbook” beginning on page 36. The Handbook is available online at https://www.bookstore.ksre.ksu.edu/pubs/c560.pdf.

While it may be time-consuming to count kernels over a large area, it is important to get a good estimate of yield loss by counting kernels and ears from several locations in the field, and also to include both header and thresher losses. Changes can then be made in the harvest operation and to the combine to improve the harvest efficiency. It is also important to check for field losses at different times of the day when harvesting and on different fields. Changes in weather conditions (moisture and temperature) or other factors may impact harvest efficiency. 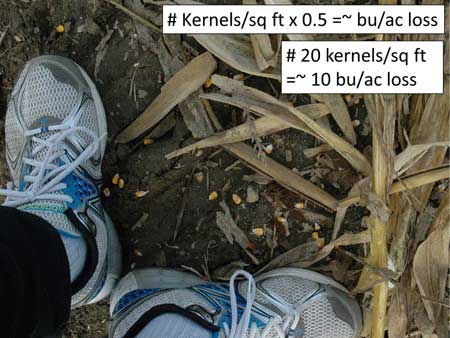 Ground speed is one of the most important factors that a combine operator can control to improve harvest efficiency. By matching combine ground speed to crop throughput and harvest conditions, the operator can improve harvest efficiency. Excessive ground speed results in greater losses at almost all stages of the harvesting operation. Ground speed that is too slow may fail to keep the combine operating at full capacity, decreasing the threshing efficiency, and increasing the specific fuel consumption (gallons/bu).

Header loss occurs when kernels do not make it into the machine. Both biological and mechanical factors contribute to header loss. Corn that has lodged or is too dry may shatter, causing whole ears to be lost. Deck plates that are set too widely may cause excessive butt shelling of the ears. Adjusting both the header speed and relative ground speed can reduce header loss; slower may be better.

To measure header loss, harvest a portion of the field and then place a marker toward the rear of the combine and in front of the tailings discharge. Back the machine up so that the front of the header is even with the marker. Grain on the ground in the area between the header and the unharvested portion of the field is due to header loss. To determine the loss per acre, count the number of kernels or ears on the ground between the front of the combine and the unharvested corn and estimate the yield loss.

2.  Gathering chains should extend at least ¼ inch beyond the snapping plate when measured at the front of the plate. Control chain speed so that stalks are guided into the rolls without uprooting.

3.  Snapping rolls should be set according to stalk thickness with speed correlated closely to ground speed so that the ear is snapped in the upper third of the roll. This helps reduce ear loss.

4.  Deck plates should be set as wide as possible without losing ears or shelling corn off the ear. This reduces the amount of trash taken into the machine. The spacing between the plates should be 1/8 to 3/16 inch tighter at the front of the plates than at the rear. In highly variable crop conditions, paying close attention to deck plate spacing has one of the largest potentials for payback. Newer headers with automatic or hydraulically actuated deck plates have the potential to significantly reduce header losses.

5.  Trash knives should usually be set as close to the rolls as possible to prevent wrapping.

As with most other crops, cylinder or rotor adjustment has a great effect on corn quality. As much as 80% of corn kernel damage occurs during the shelling process, so careful management at this point will produce dividends throughout storage and drying. Moisture content has a large effect on the amount of damage, with fines increasing rapidly at high moisture. If possible, delay harvest delayed until moisture is between 20-25%.

1.  Concave clearance should be set so that cobs fracture into halves or pie-shaped segments. If the cobs are broken into smaller halves or quartered pieces, higher cylinder or rotor speeds will be necessary to remove the grain, which in turn can contribute to grain damage, loss, and decreased sample quality.

2.  Reduce cylinder or rotor speed to the point that an occasional kernel is left on the cob. Several studies have shown that the best compromise between unshelled grain and excessive kernel damage occurs when about 0.2% of the kernels remain on the cob.

Machinery settings can affect grain losses at the sieve and chaffer. Grain losses may be reduced by adjusting fan speed. If there is too much trash, the kernels stay in the trash through the straw walkers in a conventional combine or over the cleaning shoe in a rotary design. The kernels are then thrown out of the machine in the tailings. This can result in a windrow effect when the corn kernels germinate (Figure 4). 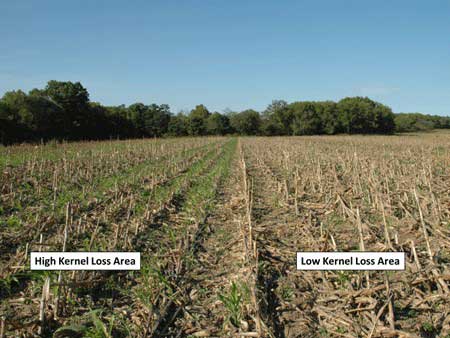 Careful adjustment of the combine can improve this. If the air speed is too high, too many kernels are lost. Conversely, if air speed is too low, unnecessary foreign material is retained in the grain resulting in quality dockage at the point of delivery. Adjust chaffer and sieve to minimize grain losses in the tailings. Yield losses from cleaning operations can be measured by counting kernels behind the combine. Especially look for windrowing effects if an adequate spreader is not used.

Efficiency at each stage of the production cycle is important for growing and harvesting the best yield possible. In challenging years such as 2018, it is especially critical to be aware of equipment calibration to increase the harvest efficiency.

In addition to the combine losses described here, additional losses can occur during transfer events. While this may look substantial, it is usually not very high across the entire field.

There is a free mobile app from Ag PhD available to estimate harvest losses based on the kernel count per square foot. The download link is here: iOS. The app allows the user to select the crop and input the number of seed or kernels counted from an area on the ground. Harvest loss is calculated from this count.

While harvest efficiency will never be 100% and it is important to complete the harvest in a timely fashion, paying attention to details during harvest can increase profitability. A normal harvest loss rate to aim for is 1 to 2%. Careful attention to equipment, harvest conditions, and harvest operations can minimize yield losses at harvest time and put more corn in the bin. Now is the time to prepare for harvest by getting equipment in optimal operating conditions.

A final consideration is to examine efficiency of all crop harvesting operations. Because we have a long period of warm temperatures and adequate fall rain, we can see the corn harvest losses as volunteer corn. Similar losses can occur during wheat and soybean harvests. However, these losses are often not as apparent as the losses during corn harvest. Improving crop harvest efficiency means more grain in the bin and less on the ground.