During the current season, the wheat crop has likely taken up a very limited amount of S due to two main reasons. First, the majority of the S needs by the crop will occur after spring green up, when the crop goes through stem elongation. Thus, fall S needs by winter wheat are very small, which was exacerbated this year by small crop growth due to droughty conditions that limited crop emergence and tillering across most of the state. Second, the dry conditions also likely limited S movement into the root zone. 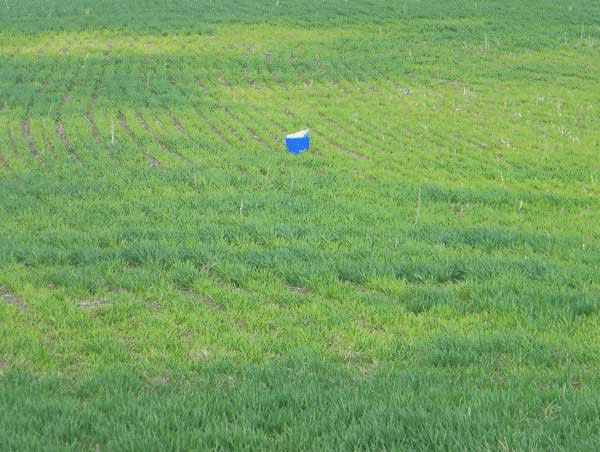 Sulfur deficiencies in wheat have been showing up early in the spring, shortly after green-up, before organic S is mineralized from soil organic matter, and before wheat roots can grow into the subsoil to utilize any available S (sulfate) accumulations. Deficiencies of S are often difficult to identify because the chlorosis is not always obvious. Crops lacking S also may be stunted, thin-stemmed, and spindly. In the case of winter wheat, S deficiency delays stem elongation and early-spring maturity; however, it can hasten late-spring maturity and shorten the grain-filling period. In other cereal grains, S deficiency delays maturity. Winter annual weed competition is also enhanced due to the slower growth and lack of good tillering.

The majority of S in soils is present in organic forms in surface soils and as sulfate (SO42-), an inorganic form. Sulfate is relatively soluble, so it tends to leach down into the subsoil. In many of our Kansas soils, it will accumulate in the B horizon (subsoil) in two forms. Clay surfaces and coatings will retain some sulfate, and sulfate will also be present in the subsoil of many Kansas soils as gypsum (calcium sulfate).

There is a soil test for available sulfate-S in the soil profile. For proper interpretation of this test, soil texture, soil organic matter, , the crop to be grown, and the expected yield level all need to be considered. Accurate estimates of S needs cannot be made from a surface sample alone. Since sulfate is mobile, sampling to a 24-inch depth is important. However, due to the relatively high demand for S during the rapid vegetative growth phase of wheat, and relatively shallow rooting by the wheat crop at this time, the S measured in the deeper, subsoil levels by the test may not be available to wheat in the early spring, especially where soils are cold. Now is a good time to collect soil samples and assess S levels as we plan for topdressing.

Leaf tissue tests can be a useful tool particularly when trying to determine the exact cause of yellow wheat. A representative sample can be made by collecting the newest mature leaves from 30+ plants throughout the area where deficiency symptoms are observed (“bad” areas).  A similar sample from a “good” area (no deficiency symptoms) should also be collected. This will allow for direct comparisons between “good” and “bad” areas.

Topdressing with thiosulfate and UAN can be done early, before Feekes 5 growth stage (green up), and at temperatures below 70 degrees F. Be aware that some leaf burn may be expected with some of these liquid fertilizers. These products would be good sources for pre-plant application as well, although pre-plant applications would be more prone to leaching during the fall and winter when crop uptake is limited – especially in sandier soils where S deficiency symptoms are more common.