The 2021 Wheat Quality Tour took place from May 17 through May 20, around 2-3 weeks later than in past years. The majority of the fields evaluated were between boot and anthesis stages. For this reason, the “late-season formula” was used to calculate grain yields in these fields, which accounts for the number of heads present at the time of sampling rather than estimating the potential tiller loss across the season. Approximately 45 people from 13 states actively scouted 350 Kansas wheat fields in 15 groups and six routes (Figure 1). The groups left Manhattan and headed to Colby on the first day, from Colby to Wichita on day 2, and finally from Wichita to Manhattan on day 3. 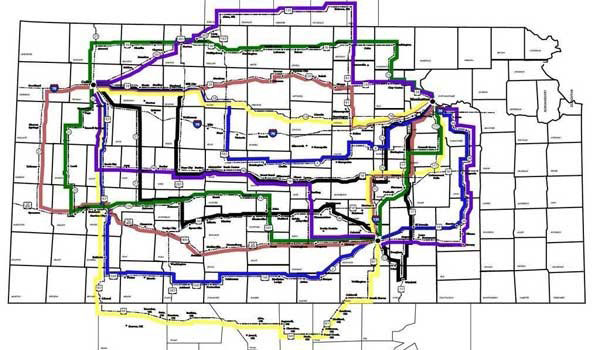 Precipitation around the sowing time varied considerably across the state, leading to large variability between and within fields according to the different sowing dates in Kansas. Around the state, wheat fields planted mid- to late-September had sufficient rainfall to emerge on time and attain good stand. However, fields planted in October and early in November – usually planted after corn in western Kansas and after soybeans in central Kansas – had minimal soil moisture at sowing, which resulted in uneven emergence and stand establishment. In many cases, fields sown in October did not emerge altogether until November, or parts of the field that reached moisture emerged earlier than dryer portions of the field. This led to high within-field variability, which was even more apparent in fields with different corn residue distribution: plants had lower stand and slower emergence in spots where residue was concentrated, resulting in a considerably less developed crop in these areas (Figure 2). 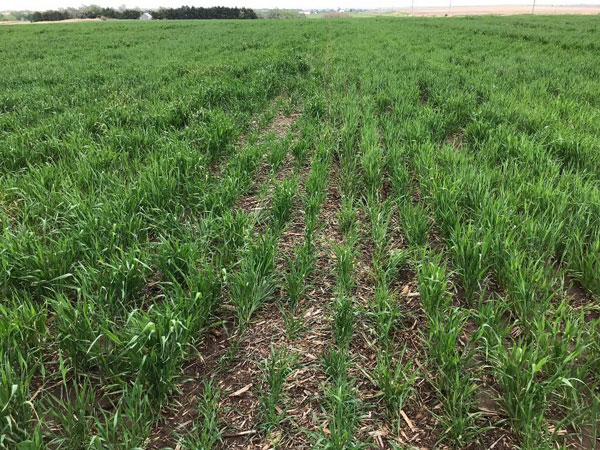 Especially in the central and north part of the state, plants were anywhere between booting and heading stage within the same field, making them a few days apart in terms of maturity. Drought stress was also observed across fields, and it was more evident in the southern part of the state. Recent precipitation events in late March and early May were received timely and might be used efficiently for grain filling, but uneven developing stages in northern Kansas might be a problem at harvest. As the tour moved into eastern southwest Kansas and south central Kansas, the fields were more even and showed less within field variability, likely due to a higher rainfall amount during October as compared to central and north-central Kansas.

The most often mentioned diseases in the wheat quality tour were barley yellow dwarf virus, stripe rust, and wheat streak mosaic, followed by tan spot and loose smut. Saved seeds not treated with fungicide seed treatment promote a high risk of loose smut and potential rejection at the elevator (Figure 3). Stripe rust in the upper canopy was seen throughout the state, although some fields were possibly sprayed with fungicide and thus only the lesions were present. Wheat streak mosaic caused considerable damage in many parts of the state, including many of central and south-central Kansas counties where it is usually not a common concern. Possibly, wheat scab might appear later in the season as wet conditions were dominant across the state close to heading and flowering stages (Figure 4). Fields sown with varieties susceptible to scab and especially after corn need to be scouted in the following weeks and could likely benefit from a fungicide application to help control head scab. 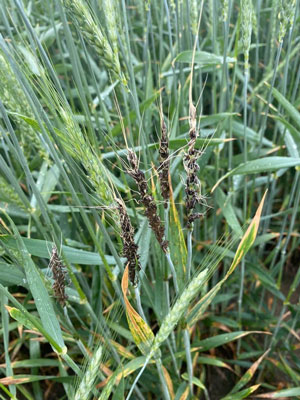 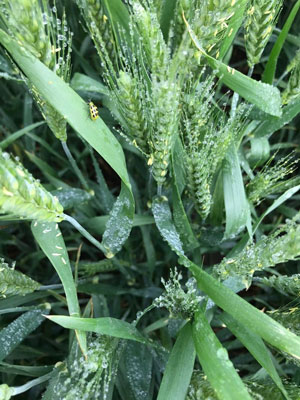 Although nutrient deficiency was not as common of a theme in 2021 Wheat Quality Tour as in some previous years of the tour, some fields were showing visual symptoms of nitrogen and sulfur deficiencies, sometimes associated with drought stress (Figure 5). In this case, the wheat canopy was thin and the lower leaves and stems were dried back, which is not ideal for grain filling since the leaves are the primary source to produce sugars and translocate them to the grain. Fields with uneven topography showed nutrient deficiency in the lower parts, likely due to water accumulation which may cause nutrients leaching in the deeper of the soil. Also, cooler temperatures earlier in the spring might slow organic matter mineralization, but warmer weather and moisture may release N and S in the following weeks. When symptoms were even across the field, fertilizer application rates less than the crop nutrient demand were likely the cause for nutrient deficiency. 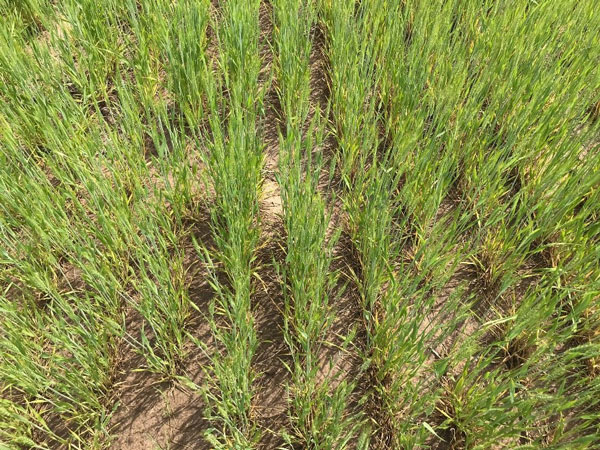 The factors above were the major challenging factors mentioned in the 2021 Wheat Quality Tour. Drought stress around sowing in some instances and in the early spring might decrease yield potential, but timely precipitation during grain filling may overcome some damages caused by drought. Although nutrient deficiency was less seen this year, lack of N is still one of the biggest causes for yield gaps in Kansas. While some fields showed significant disease incidence up to the upper canopy, fields seemed to be sprayed with foliar fungicides in most instances either evidenced by recent tracks on the fields or the lack of active spores where a previous disease incidence was obvious. Cool and moist weather conditions are a perfect combination for stripe rust, and can also increase the risk for scab in the next weeks. However, the decision to perform fungicide applications should likely already have been taken in most of the state, especially as most fungicide products would already be off label at the current crop growth stages.