The results of the 2020 National Winter Canola Variety Trial (NWCVT) are now available online at https://bookstore.ksre.ksu.edu/pubs/SRP1164.pdf. The objectives of the NWCVT are to evaluate the performance of released and experimental varieties, determine where these varieties are best adapted, and increase the visibility of winter canola across the United States. Breeders, marketers, and producers use data collected from the trials to make informed variety selections. The NWCVT is planted at locations in the Great Plains, Northern Plains, Midwest, and Southeast.

Seed for the NWCVT was distributed to 31 test sites in 18 states for the 2019–2020 growing season. The locations receiving seed are illustrated on the map on the front cover (Figure 1). See the back cover for a listing of participating cooperators. Of the 24 entries, 10 are commercial and 14 are experimental. These entries were provided by eight seed suppliers. All entries in the trial were treated with insecticide and fungicide seed treatments to control insects and seedling diseases through the late fall and early winter months.

In general, the 2019–2020 growing season was marked by dry conditions that made establishment especially difficult. Temperatures were moderate but winter kill was a factor where plant size was too small for overwintering. Spring weather including severe storms and late freezes negatively impacted the crop at the reproductive stage.

Nine harvested test sites in six states are included in this report: Fruita, CO; Vincennes, IN; Belleville, Garden City, and Manhattan, KS; Clovis, NM; Chickasha and Lahoma, OK; and Alburgh, VT. Nineteen locations were not harvested because of poor stand establishment, winterkill, or spring weather. A handful of locations were abandoned because of operational restrictions as a result of the COVID-19 pandemic. A new cooperator in 2019–2020 was Moccasin, MT.

This work was funded in part by the fees paid by seed suppliers, the United States Department of Agriculture National Institute of Food and Agriculture Supplemental and Alternative Crops Competitive Grants Program, and the Kansas Agricultural Experiment Station. The project would like to extend sincere gratitude to former assistant scientist, Scott Dooley, for his dedication and 10 years of service to supporting all NWCVT activities. Sincere appreciation is expressed to all participating researchers and seed suppliers who have a vested interest in expanding winter canola acres and increasing production in the United States. 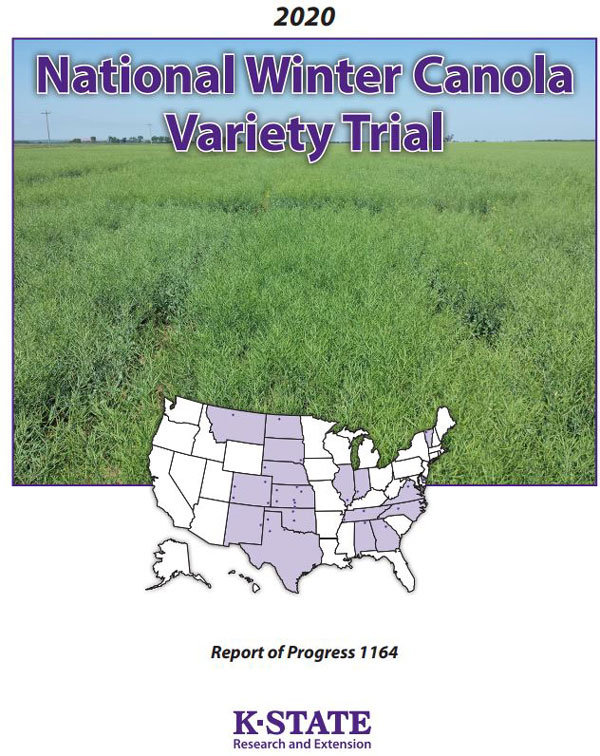