Hophornbeam copperleaf has a funny name, but it can be a serious problem – especially if residual herbicides are not used. In this month’s World of Weeds article, will discuss more about this plant, which is also called three-seeded mercury.

Hophornbeam copperleaf (Acalypha ostryifolia) is a summer annual and is native to North America. It is found throughout much of Kansas, but is most common in the southeastern part of the state. It is often found in moist areas with full to partial sun. It is well adapted to no-till production systems, but can be found in conventionally-tilled fields as well. In experiments conducted in Topeka and Junction City, KS, Horak et al. reported that each hophornbeam copperleaf plant can produce over 12,500 seeds. The same paper reported that seeds germinate best at about 86°F and can germinate throughout the growing season.

Hophornbeam copperleaf has a hairy stem that can grow up to approximately four feet tall. Even though it is classified in the spurge family, it does not produce milky sap when the stems are broken. The round cotyledons could be mistaken for prickly sida and are covered in hairs. The first leaves are opposite (Figure 1), but later leaves are alternately arranged along the stem and are somewhat heart-shaped at the base with serrated margins. Male and female flowers are found on the same plant, but in separate locations. Male flowers are found at the base of branches, while female flowers are found at the end of stem (Figure 2). 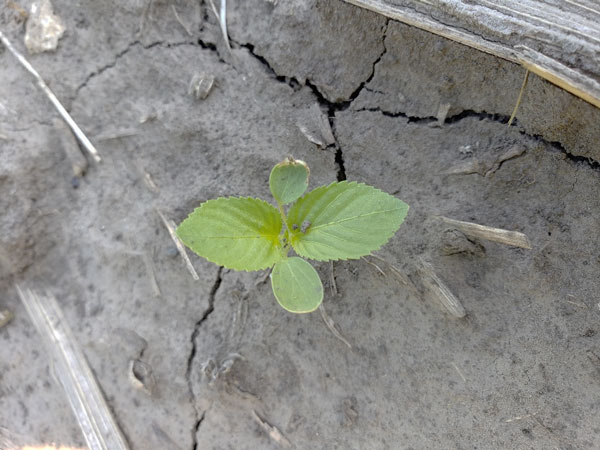 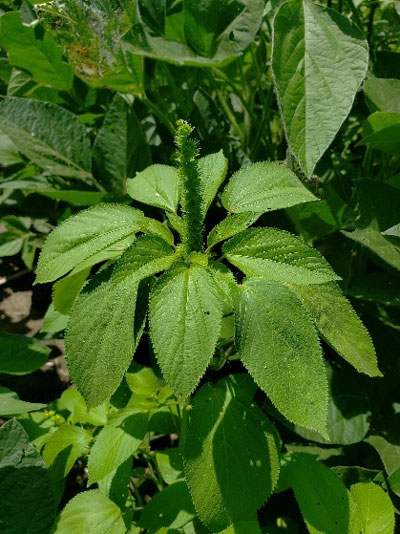 Figure 2. Mature hophornbeam copperleaf. Notice the serrated leaf margins and the seedhead at the top of the plant. Photo by Sarah Lancaster, K-State Research and Extension.

Hophornbeam copperleaf germinates best in warm soils, so it may emerge after herbicides have been applied. Because of this, residual herbicides such as atrazine, metribuzin, Dual Magnum, Spartan, or Valor are important for control. Horak et al. reported that post-emergence applications of Cobra and Reflex can effectively control hophornbeam copperleaf, but Resource, 2,4-D and Group 2 herbicides (Classic, Harmony, Pursuit, and Raptor) did not provide control. Others have reported that hophornbeam copperleaf can be controlled with post-emergence applications of Liberty, but is not well controlled by glyphosate or dicamba.

What weed species will be featured next month? Stay tuned to the Agronomy eUpdate to find out!