Heavy rains, as mentioned in an earlier eUpdate about “toad stranglers”, had been prevalent in eastern Kansas up until June. Drought, on the other hand, has many definitions and tends to creep into the weather discussions. This has been occurring in western Kansas this year and is rapidly becoming more widespread this month. The Glossary of Meteorology defines drought as “A period of abnormally dry weather sufficiently prolonged for the lack of water to cause serious hydrologic imbalance.” In everyday terms, it is generally defined as a period when water is insufficient for existing demands. In Kansas, drought declarations, which trigger specific actions, are issued by the Governor’s office.

The U.S. Drought Monitor has been active since 2000. This resource is produced jointly by the National Oceanic and Atmospheric Administration (NOAA), the U.S. Department of Agriculture (USDA), and the National Drought Mitigation Center at the University of Nebraska-Lincoln. The U.S. Drought Monitor website is hosted and maintained by the National Drought Mitigation Center. The weekly monitor integrates hundreds of monitoring measures, including the Palmer drought severity index (PDSI), the standardized precipitation index (SPI), stream flow, evaporative demand, soil moisture and vegetative health (Figures 1 and 2). Despite all these parameters, a major input to the Drought Monitor is observed impacts on the ground. These include photos, reports of conditions from the public, and water supply levels. Inputs are a collaboration between local, state, and federal agencies. The Monitor is updated each week on Thursday with data cutoff on Tuesday morning.

The U.S. Drought Monitor is used by policymakers and media in discussions of drought and in allocations of drought relief. As part of its response to the drought of 2012, the USDA streamlined the process for secretarial disaster declarations, making declarations nearly automatic for a county shown in severe drought on the U.S. Drought Monitor for eight consecutive weeks. 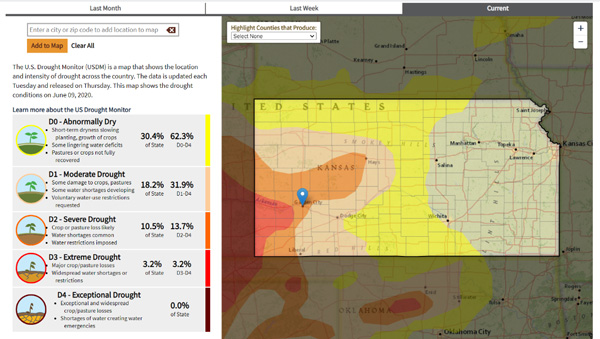 The Southwest Division is the epicenter for the most severe conditions currently displayed on the US Drought Monitor. Precipitation deficits since November illustrate just how dry it has been, with departures as much as 5 inches and localized higher amounts (Figure 3). A five-inch deficit in the southwest relates to a one third of their annual average moisture. 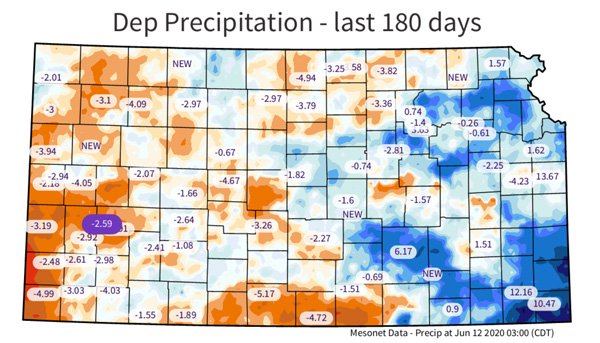 Figure 3. The last 180 days of precipitation departure in Kansas as seen on the Kansas Mesonet (mesonet.ksu.edu).

Precipitation alone does not capture all the components of drought.  Temperature and wind are contributors to the evapotranspiration rates, or the amount of water used by vegetation. Temperatures in the Southwest Division have been much warmer than normal to start June, as can be seen at the Garden City Mesonet station (Figure 4).

Conditions in the southwest are verified by reports on the ground. Substantial ground cracking from dry soil and a poor wheat stand in Scott Co reflect such conditions (Figure 5). 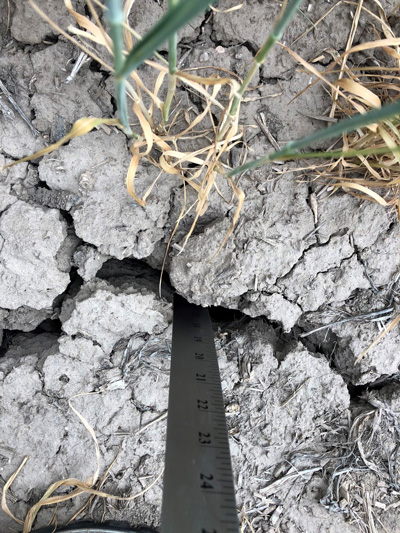 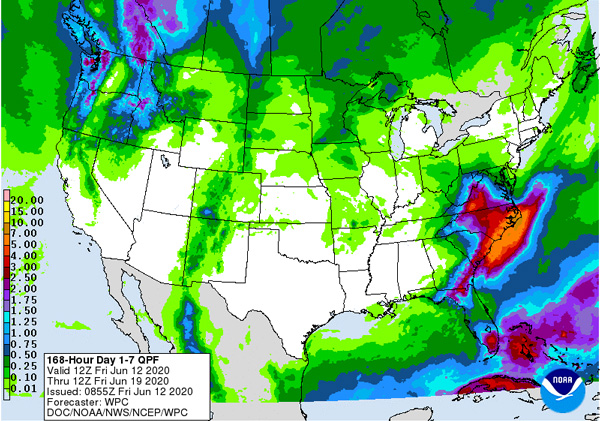 More often than not when decision-makers are updating drought conditions, they lack on-the-ground truth of impacts. You can help remedy this issue! Please don't hesitate to send photos to either our Twitter account (twitter.com/ksmesonet) or via email at kansas-wdl@ksu.edu . Of the most help are photos of the current conditions (wet, dry, normal - we want them all!). Even more useful are impact photos from the same location in comparison to a previous time. For example, taking a photo once a month from the same area/view can greatly describe the changes due to drought (or wetness). Reports of agriculture impact and/or water supply are also extremely useful.

Summary of current conditions and the Drought Monitor