The typical time to topdress winter canola is during the rosette stage. Usually this can be accomplished in January or February, since temperatures are cold enough to keep canola at the rosette stage. Current drought conditions for most of Kansas might pause topdressing at this time until moisture is available to incorporate the fertilizer into the soil.

In general, temperatures during the canola growing season have been warmer than normal with a few periods below normal. Temperatures have been cold enough that we are seeing the typical winter response of white and brown colors as leaves loose chlorophyll. When these leaves are pulled back, the majority of plant crowns are green and firm, indicating the plants are alive. However, final winter survival ratings should not be taken until the crop begins to break dormancy and after the threat of further cold temperature loss has passed.

Under all circumstances, producers should check their fields for surviving plants before applying a topdress application even if there is no concern for poor winter survival (Figure 1). Where stand thinning is observed, it may be advisable to wait until canola is actively growing again before topdressing. This will ensure that there is adequate spring stand to take to harvest. 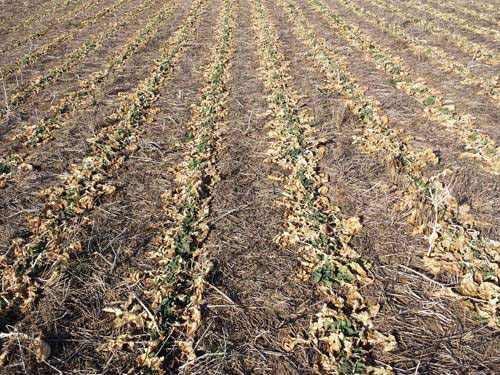 Either solid or liquid forms of N can be used. Once the weather warms and growth begins, applications using streamer bars or solid materials are preferred for broadcast applications to prevent/avoid leaf burn.