(Editor’s note: The following is an excerpt from a new K-State publication, Sunflower Moth, MF3108, part of the Kansas Crop Pests series of publications. The author is J.P. Michaud, entomologist at the Agricultural Research Center-Hays. You can see the full publication at: http://www.ksre.ksu.edu/bookstore/pubs/MF3108.pdf)

The sunflower moth, Homoeosoma ellectellum, is the most serious pest of commercial sunflowers in the central Great Plains. It is well adapted to exploiting commercial sunflowers where large fields of plants develop and flower all at the same time. The oversized flowers of commercial varieties may host hundreds of larvae, and their feeding damage permits infection by Rhizopus, a fungus that requires physical injuries to infect the plant. Without timely treatment, it can result in total yield loss over a large acreage. Losses from this pest, commonly known as the head moth, have deterred growers from incorporating sunflowers into rainfed crop rotations where the plant is a natural fit. 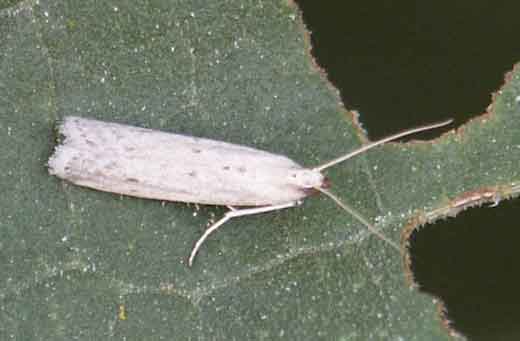 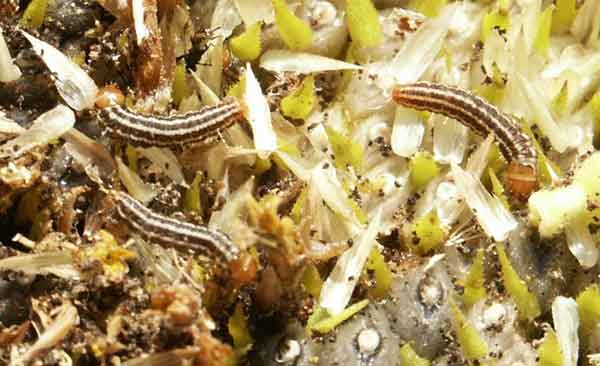 The sunflower moth is a migratory pest that breeds year-round in northern Mexico and moves northward annually with successive generations. Migration is facilitated by seasonal weather patterns that prevail across the southern Great Plains during midsummer and generate southerly winds that are ideal for transporting airborne insects over long distances. The reproductive success of earlier generations probably affects the numbers of moths in each annual migration. Under warm conditions, the moths can complete a generation in 30 days. Kansas can experience secondary generations of local origin following the initial migration, especially in years when wild sunflowers are locally abundant and early blooming fields where moths are not controlled can serve as a source of infestation for later planted ones.

Cultivated sunflowers are a huge food supply capable of supporting the development of many larvae, while at the same time providing a refuge from parasitism. Research has shown that because most wasp parasitoids are unable to search such large flowers, they abandon them. Many species probably do not possess ovipositors long enough to reach larvae that burrow deep within the receptacle. Certain parasitic flies of the family Tachinidae are slightly more successful because they deposit live larvae able to penetrate the flower in search of a host. Although biological control may contribute to suppression of sunflower moth in wild host plants, parasites and predators cannot prevent economically damaging infestations in commercial fields.

Successful management of sunflower moth hinges on rigorous monitoring of individual fields and prompt insecticide application once threshold numbers are detected. The goal is to kill adults and early instar larvae before physical injury to the flower occurs that can permit fungal infection. Fortunately, early instar larvae remain vulnerable to contact insecticides for several days before causing damage because of their pollen-feeding habits and mobility on flower faces. Later instar larvae feed more aggressively and bore into the receptacle where they can avoid insecticide, creating multiple infection sites for Rhizopus fungi that can quickly rot the head. Rhizopus infections can invade vascular tissues and become systemic within upper plant parts, inhibiting seed fill.

Early-planted fields typically suffer the most damage from migratory flights in Kansas. Fields planted in early July or those that bloom after August 10 are less likely to develop economic infestations. They may still be affected by second-generation moths that emerge from patches of wildflowers or adjacent early-planted fields where the pest has not been adequately controlled. Geographically, average moth pressure tends to decrease from eastern to western Kansas, reflecting prevailing paths of summer winds.

Because migratory moths can appear in large numbers virtually overnight, scouting should begin as soon as the first flowers open and continue every 24 to 48 hours until pollen shed is complete in a majority of plants. Because moth migrations are spotty and each field has its own unique developmental schedule, it is not advisable for growers to follow the management decisions of neighbors. There is no substitute for scouting individual fields. Fields that have been sprayed should be revisited to determine the efficacy of treatment as soon as the re-entry interval expires. The treatment threshold is one to two moths per five plants. Projected crop value can be used to elect the low or high end of this range.

Historically, sunflower moth activity has also been monitored with commercially available pheromone traps that attract and capture male moths. Traps are best placed on T-posts above canopy level at least 10 rows into the field on north and south sides, with at least four traps per field. Trapping should begin as plants enter the R-5.1 stage (ray petal emergence) and trap catches monitored daily through the R-5.8 stage (80 percent pollen shed). Insecticide applications should be considered whenever pheromone traps average four moths per trap per day. If trap catches average fewer than four per day, field scouting is justified to determine whether the action threshold has been reached. Trap catches averaging less than one per day usually have resulted in noneconomic infestations.

However, it is questionable whether the information provided by trapping is sufficiently useful to justify the additional labor it requires, especially when certain outcomes dictate manual scouting before a decision can be made. Strong winds can lead to ‘passive catch’ of other moth species that may be difficult to distinguish from sunflower moths once they are stuck to glue in the trap. In addition, doubts have been raised about the persistence of the pheromone lure under Kansas field conditions that typically involve high temperatures and strong winds.

(Note: An article in next week’s issue of the Agronomy eUpdate will discuss the effectiveness and pollinator safety of the various treatments for sunflower moth. – Steve Watson, Agronomy eUpdate Editor)