In 2020, disease pressure was generally below the long-term average for corn, largely driven by atypically dry conditions in August and September. An active tropical storm season pushed southern rust (Figure 1) into the state earlier than normal. It was first reported in Kansas on July 15. This arrival was around the same time as last year, which is earlier than historic reports. In northeast and southeast Kansas, southern rust incidence was high but severity on the ear leaf was generally low. This was likely due to lack of adequate leaf surface wetness, which is necessary for infection. Greater loss was observed in central Kansas where moisture was present during grain fill. 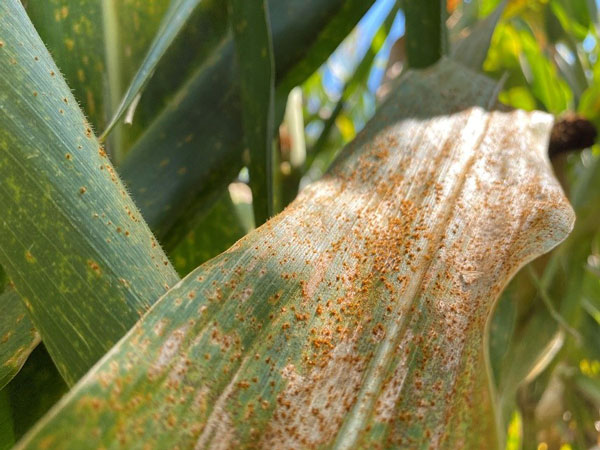 Gray leaf spot was observed in northeast and northwest Kansas, although lit did not reach high levels due to low moisture at critical growth stages. Where gray leaf spot was present, it mainly remained in the lower canopy.

Bacterial leaf streak (Xanthomonas vasicola or Xvv) was reported in western Kansas. It was most common in no-till, continuous corn that was under irrigation. Foliar symptoms can be confused with gray leaf spot. Bacterial leaf streak has been common in Kansas corn production areas since it first showed up in 2016.

Reports of stalk rots were lower than in previous years. There were a few reports of Diplodia and Fusarium ear rot throughout the state. Diplodia ear rot can cause entire ears to appear white and moldy and can result in kernel shrinkage and cracking.

In 2020, soybean disease reports were lower than in previous years. In general, very little frogeye leaf spot was reported. In northeast Kansas, sudden death syndrome (Figure 2) was observed, but overall prevalence was low.

Charcoal rot was severe in some locations, particularly in the central part of the state and was likely due to unseasonable dry weather during critical reproductive stages in August and September. Phytophthora root rot was present in eastern Kansas. This disease has been increasing in importance in recent years, particularly in soils with high clay content and poor drainage. Stem canker, pod and stem blight, and Septoria brown spot were occasionally present, but rarely at yield limiting levels.

The 2020 Kansas sorghum crop disease pressure was low overall. Across the state, leaf diseases were present in very low levels. There were some reports of bacterial leaf streak in northwest Kansas. As usual, sooty stripe was present across the state, and levels were high in north-central Kansas (Figure 3). Drought conditions late in the season led to increased presence of stalk rots. Overall, stalk rot conditions were lower than in previous years. 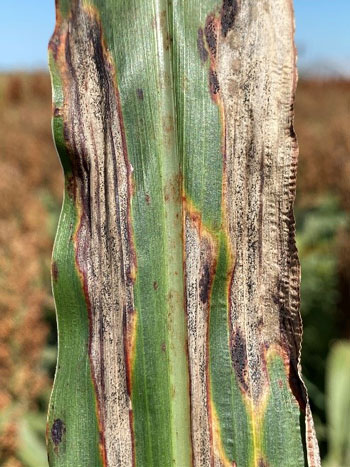