To save time and cost, some wheat producers may be thinking about adding a little extra nitrogen (N) as urea or UAN to their phosphorus fertilizer through the drill with the seed. This would either be in addition to, or instead of, any preplant N applications.

While a minimum preplant N application of 20 to 40 lbs N per acre is often desirable, especially in no-till production systems, it is important to avoid placing urea containing fertilizers in direct seed contact. We suggest that NO urea or UAN solution be placed in contact with the seed. If the fertilizer N applied at seeding will be separated from seed by 1 inch or more, urea-containing fertilizers can be safely used.

If the starter fertilizer can’t be “spiked” with urea to add extra N, how can the necessary 20 to 40 pounds of N be applied? Subsurface banding (knifing) of N as either anhydrous ammonia, liquid UAN, or dry product will result in the greatest N use efficiency by the wheat crop. This is especially true for no-till wheat production.

When placing starter fertilizer in direct contact with wheat seed, producers should use the following guidelines:

The problem with placing urea-containing fertilizer with the seed is that urea is initially converted to ammonia and may be toxic to plant roots if the wheat seed is placed in direct contact with the fertilizer. Producers may hear of someone who has placed urea in direct seed contact and seemed to have no problems, but there are also many cases where urea-containing N fertilizers has injured the developing seedling and reduced or delayed emergence significantly. The risk of injury is greater in drier soils, at higher soil pH levels, and at higher N rates. High soil pH favors a higher concentration of ammonia as compared to ammonium as urea hydrolyzes. There is significant risk associated with placing urea-containing fertilizers in direct seed contact.

The chart below shows how soil texture affected the level of wheat germination when urea-N was applied with the seed in a K-State greenhouse study. The wheat was well watered in this study, but urea-N placed with the seed still reduced germination, especially in the sandy soil. The readings shown below were taken after 10 days. With the high rates of urea used in this study, it is possible that more damage to the seedlings would occur with time as the urea continues to hydrolyze into ammonia. 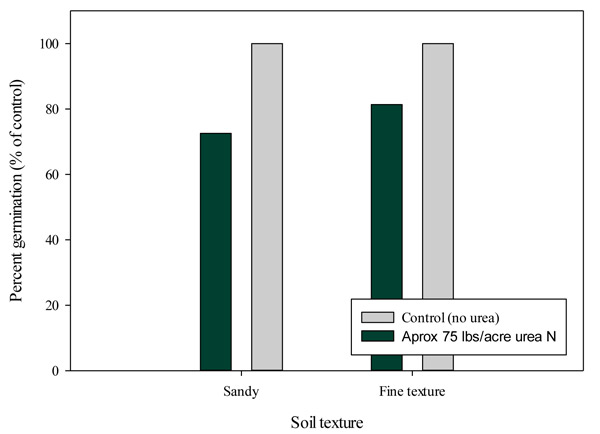 Air seeders that place the starter fertilizer and seed in a band an inch or two wide, rather than a narrow seed slot, provide some margin of safety because the concentration of the fertilizer and seed is lower in these diffuse bands. In this scenario, adding a little extra urea containing N fertilizers to the starter less likely to injure the seed - but it is still a risk.

Blending DAP or MAP with the seed

What about blending dry 18-46-0 (DAP) or 11-52-0 (MAP) directly with the seed in the hopper? Will the N in these products hurt the seed? The N in these fertilizer products is in the ammonium-N form, not the urea-N form, and is much less likely to injure the wheat seed, even though it is in direct seed contact. As for rates, guidelines provided in the table above should be used. If DAP or MAP is mixed with the seed, the mixture can safely be left in the seed hopper overnight without injuring the seed or gumming up the works.

Although the response of wheat to these starter fertilizer products is primarily from the P, the small amount of N that is present in DAP, MAP, or 10-34-0 may also be important in some cases. If no preplant N was applied, and the soil has little or no carryover N from the previous crop, then the N from these fertilizer products could benefit the wheat, in addition to the P.

Dual placement of N and P

Dual-placement of N and P (anhydrous ammonia or UAN plus 10-34-0 applied in the same band below the soil surface) is a fertilizer application method usually used in preplant applications. Ammonium-N has long been known to increase P uptake by crops, and dual-placement can be very effective. Sometimes, producers will use this method at planting time, trying to position the band to the side of each row of wheat seed. Use caution, however.