Questions have arisen recently about the rotation guidelines in the 2019 K-State Chemical Weed Control Guide for Resicore. Resicore is an herbicide premix of clopyralid, mesotrione, and acetochlor that is labeled for PRE and POST applications to field corn in Kansas. The statement in the weed guide regarding crop rotation to soybeans when Resicore is applied in combination with atrazine is incomplete and not totally accurate (pages 28 and 35 in the Weed Guide). The K-State Weed Guide indicates that if Resicore is applied with atrazine, soybeans are restricted for 18 months. However, that is not entirely true and there are several statements on the Resicore label that confound the guidelines for rotation to soybeans in Kansas (Figure 1).

A table in the Resicore label indicates the rotation interval to soybean is 10.5 months, but there are several footnotes below the table relative to soybean and the 10.5-month rotational restriction. Some of these footnotes could apply directly to applications in Kansas. Those footnote statements include 4, 5, 6, 7, and 8 (Figure 1). 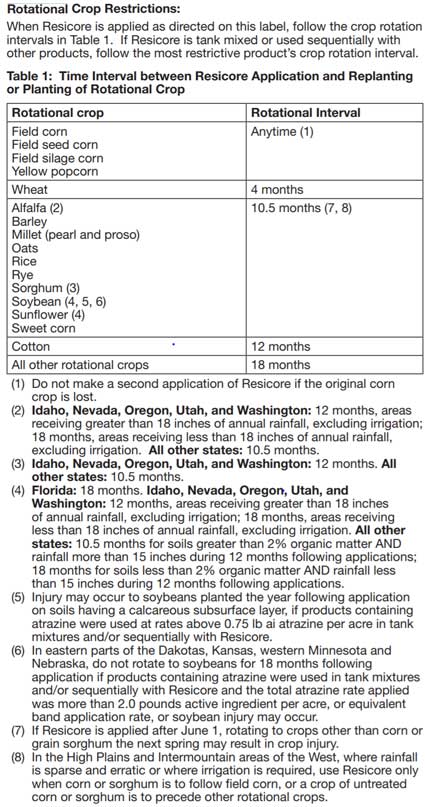 Figure 1. Rotational crop restrictions and Table 1 from the 10-23-17 revision of the Resicore herbicide label, page 4. Note the language under footnotes 4,5,6,7, and 8 pertaining to various situations.

The primary fate for each of the active ingredients in Resicore in the soil is aerobic microbial degradation. Several criteria must be met to achieve microbial degradation: 1) warm temperatures, 2) adequate soil moisture, and 3) the herbicide must be available for degradation. For example, persistence would increase in dry and/or cool soils because microbial activity would be reduced; this is where the rainfall discussion of the label arises as areas receiving less rainfall will have reduced microbial activity and longer herbicide persistence.

Beyond soil temperature and moisture, the herbicide must be available to undergo microbial degradation. Soil pH and soil organic matter along with an herbicide’s chemical properties govern its availability for degradation. Because acetochlor products are labeled in soybean, the discussion needs to focus on mesotrione and clopyralid in regards to soybean rotation. Weed science literature suggests that soil pH has minimal influence on clopyralid and mesotrione persistence, but rather that soil organic matter governs their availability. Mesotrione has a half-life of 12 days whereas the half-life of clopyralid is 12 to 70 days. Clopyralid is in the same chemical family as picloram (Tordon 22K), and given that soybean is very sensitive to clopyralid (Figure 2), it is rational that increased rotational restrictions should be utilized when Resicore is applied to soils with low organic matter. 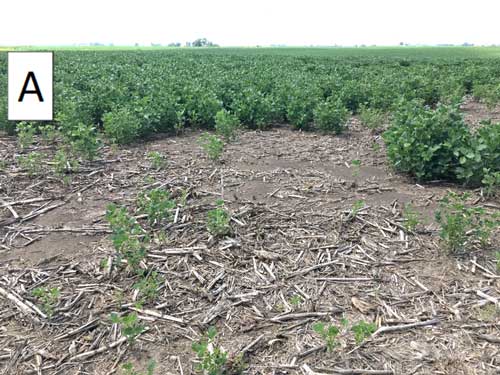 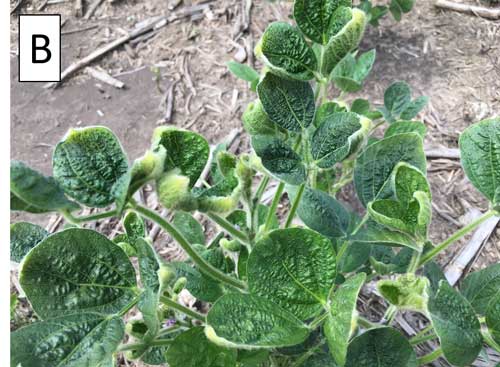 Figure 2. Clopyralid carryover can injure soybeans. A) Resicore was applied to corn. The following year soybean was planted, and a reduced stand was observed in boom overlap areas. B) Some soybeans displayed the typical epinasty symptomology observed from growth regulator type herbicide from root uptake of the clopyralid (Photos by Marshall Hay, K-State Research and Extension).

Footnotes 5 and 6 refer to the use of atrazine with Resicore. The Aatrex label indicates that soybean may not be planted until the year following an application of atrazine or no crop other than corn or sorghum may be planted when atrazine is applied after June 10. After review of the Resicore label, it appears that the Resicore label is more restrictive than the Aatrex label in this regard about June 1 vs June 10 applications injuring soybean. It is important to note that atrazine degradation, albeit microbial, occurs independently from mesotrione and clopyralid. While degradation of atrazine is influenced by soil pH as well as soil temperature and moisture, is important to understand that there is no stacking or overloading ramifications in terms of combining clopyralid, mesotrione, and atrazine resulting with increased persistence. Each can cause carry-over problems in soybean, but each would be independent of use rate, etc. of the other herbicides.

Footnote 8 offers additional concern for Resicore applications in the High Plains; however, where do the High Plains start? Based on the Kansas Geological Survey, the High Plains region includes most of the western third of Kansas, but has a highly irregular boundary from north to south. Our interpretation of the label would be that you cannot plant soybeans within 18 months following an application of Resicore in that part of the state, regardless of whether atrazine was applied, soil parameters, or precipitation amounts.

Perhaps we have proposed more questions about the Resicore label than answers; unfortunately, we do not have the answers to all of these questions. The best we can tell from the label, soybeans can be planted after 10.5 months following applications of Resicore alone or in combination with less than 2 lbs/ac atrazine, so long as soils have greater than 2% organic matter and 15 inches of rainfall during the 12 months following application (which is longer than the 10.5-month interval). The 18-month restriction before planting soybeans is required if you are in the High Plains region; when soil organic matter is less than 2% or less than 15 inches of rainfall occurs; or if more than 2 pounds of atrazine is used with Resicore.

Next year, we will probably indicate that the rotation interval to soybean is 10.5 to 18 months and refer producers to the Resicore label for additional rotation guidelines.