Adult bean leaf beetles (BLB) are still causing some concern for soybean producers throughout north central Kansas. These adults have been chewing round or oval holes in the leaves of seedling plants (Figure 1). However, it seems much of their leaf feeding has slowed and the females are now mostly on the ground around the base of plants depositing eggs. These eggs will hatch in a few days and the larvae will start feeding on soybean roots/root hairs. These larvae resemble corn rootworm larvae but BLB larvae do not feed on corn roots just as corn rootworm larvae do not feed on soybean roots. One other major difference is that the corn rootworms eggs were deposited in fields planted to corn last year, whereas the overwintering adult female BLB deposited these eggs after finding seedling soybean plants this season.

Garden webworms have been causing concern because of visible defoliation over the last couple of weeks (Figure 2). However, most of these webworms, plus thistle caterpillars (Figure 3), have ceased leaf feeding and are in the process of pupating. The adults will be emerging over the next couple of weeks and the females will be depositing eggs to initiate the next generation. Thus, this first infestation of larvae of both species was just a “springboard” generation for the next one or two generations to come. 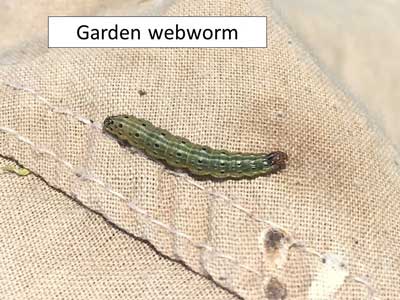 The Department of Entomology at Kansas State University (Manhattan) does not currently have an insect diagnostician. Therefore, all physical samples, phone calls, and emails (containing images) regarding arthropods (insects and mites) should initially be handled by the county extension offices. If the agriculture or horticulture agent is unable to identify a specific arthropod, then the agent will contact an extension entomologist at K-State. This process will help expedite identifying samples and addressing inquiries. The Extension Entomology Team sincerely appreciates your cooperation regarding this matter.