Fall armyworm. This moth does not overwinter in the Great Plains but migrates northward annually from southern states. It usually arrives in Kansas in July where it lays eggs on corn, sorghum, and other summer crops. Reproduction may continue through August and into September, putting early-planted wheat at greatest risk. Early-planted fields should be inspected frequently during the first few weeks following emergence.

The first sign of damage is “window­pane” injury caused by tiny larvae chewing on seedling leaves. The larvae, which are usually too small to be easily observed at this time, hide in or around the base of seedlings. Within a few days the larvae are large enough to destroy entire leaves. 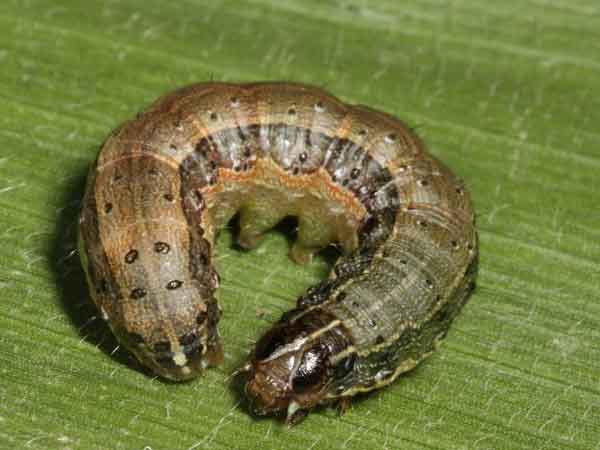 Fields with 25 to 30 percent of plants with windowpane injury should be re-examined daily and treated immediately if stand establishment appears threatened. Larvae increase in size at an exponential rate, and so do their food requirements. Later instars do the most damage, some­times destroying entire stands, and are the least susceptible to insecticides.

Without treatment, problems can continue until larvae reach maturity or until there is a killing frost.

Beet Armyworm. Beet armyworm larvae can vary from light green to nearly black. They have four pairs of abdominal prolegs and a dark head capsule. Many fine, white, wavy lines run along the back, and a broader stripe occurs along each side. There is usually a distinctive dark spot on each side, just above the second pair of true legs. Females lay eggs in masses, covering them with hairs and scales. Eggs hatch in a few days and larvae feed for about three weeks, sometimes spinning slight webs over the foliage.

Beet armyworms apparently do not overwinter in Kansas and have not been a problem until late summer or early fall. These foliage feeders usually are not a serious problem on established stands unless there are enough to severely defoliate plants. More severe problems occur in recently planted fields where seedlings may be lost when larvae clip them off near the soil surface. Economic infestations are similar to army cutworms – possibly four to five per square foot on established stands and one to two per square foot on seedling stands. Late fall infestations often disappear soon after the first hard freeze, but this is often difficult to predict. Beet armyworms are difficult to control, and options are limited.

Fall Armyworm. Infestations of fall armyworm are most likely to occur in late summer to early fall before frost (Sep­tember through October). Fall armyworm larvae have four black spots arranged at the corners of an imaginary square located near the top rear of the worm’s body. One to two worms per square foot can destroy seedling alfalfa, and populations of 10 to 15 per square foot have been observed to destroy 12-to 14-inch alfalfa. Treatment is not advised unless the majority of larvae are less than 3/4 inch long.

Diamondback larvae will overwinter and feed in the crown of canola plants. In a dry, cold winter, this may be the only green plant tissue available, providing an excellent habitat for small larvae. To check for the larvae, pull up a few plants and tap the crowns on a white piece of paper. If infestations in the crown are high they can be very destructive and stand loss may occur throughout the field. 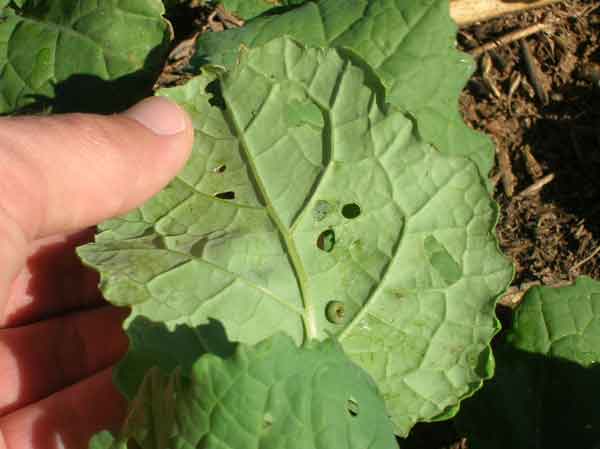