Reports of stripe rust are increasing across Kansas, although incidence remains low

Scouting efforts from across Kansas have reported several new occurrences of stripe rust this week. So far, incidence has generally been low (> 1%), and reports have been limited to the lower-to-mid canopy. There is evidence that disease incidence is increasing at some locations and producers should continue scouting efforts. Lower canopy infections are less likely to result in yield reductions. When environmental conditions are favorable (extended periods of dew, for example), infections in the lower leaves may spread to the upper canopy and neighboring plants, resulting in reduced yield. Spread within a field and symptoms that have moved to the upper canopy may warrant a fungicide application. To preserve yield, it is critical to protect the flag leaf.

Additional information for fungicide decision making can be found in the publication Evaluating the Need for Wheat Foliar Fungicides (https://bookstore.ksre.ksu.edu/pubs/MF3057.pdf) and information on product efficacy can be found in the Foliar Fungicide Efficacy for Wheat Disease Management publication (https://bookstore.ksre.ksu.edu/pubs/EP130.pdf). 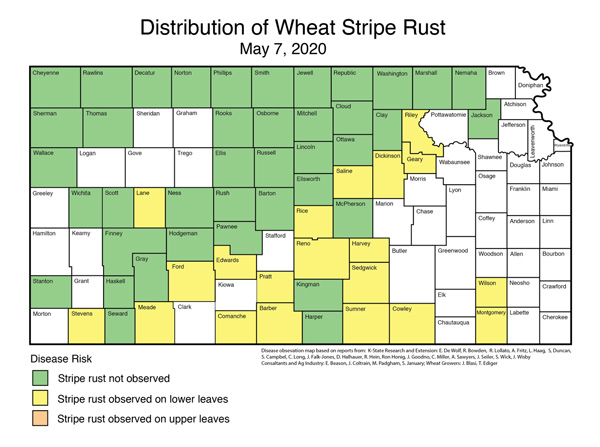 Stripe rust presents with characteristic yellow lesions that form in narrow bands across the leaf. When conditions are right, spores may spread to and infect the upper canopy. It is important to walk into the field during scouting campaigns and to move the canopy aside to get a good view of lower leaves. Walking several parts of the field is a good idea, as stripe rust can tend to form foci of high disease severity, which can be easy to miss from the edge of the field. 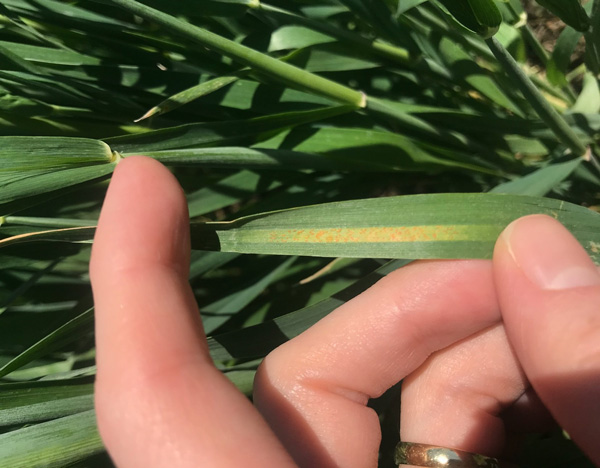 Figure 2. Photo of stripe rust with characteristic yellow lesions, present on a single leaf in the lower canopy. Image taken in Riley county on May 6, 2020. Photo by Kelsey Andersen Onofre, K-State Research and Extension.

If you find stripe rust in your county, please send a report to your local extension agent or directly to Kelsey Andersen Onofre (andersenkf@ksu.edu) and Erick DeWolf (dewolf1@ksu.edu) with photos of symptoms, if possible.