The 2019 winter wheat growing season in Kansas was a tale of two crops: one extremely challenged (though resilient) crop in the central and eastern portions of the state, and a crop that was exposed to near-optimal conditions in western Kansas.

The challenges faced by the wheat crop started early for central and eastern Kansas, with an excessive amount of rainfall during sowing time. Parts of south central Kansas received as much as 19 inches of precipitation between September 1 and November 30 (up to 11 inches between October and November, Fig. 1 upper panel), which delayed wheat sowing and, in many cases, prevented producers from sowing wheat. This situation was worsened where producers had to harvest a summer crop (soybeans) prior to sowing wheat. Consequently, Kansas set two new records: (1) the latest sowing of the second half of the crop (about 55% of Kansas wheat fields were sown prior to October 5, and the remaining crop was not sown, in many cases, until mid-November, Fig. 1 lower panel); and (2) the lowest area planted to winter wheat in Kansas in ~100 years. The fall of 2018 had an early onset of cold temperatures, which was not conducive for wheat emergence and tillering. Thus, while early-sown fields showed good fall development, many fields sown into November showed very limited fall development and did not start tillering until late February and early March (Fig. 2). With a majority of fields sown late, and coupled with a cool fall, there were very limited reports of aphids and the virus diseases they might transmit, such as barley yellow dwarf. 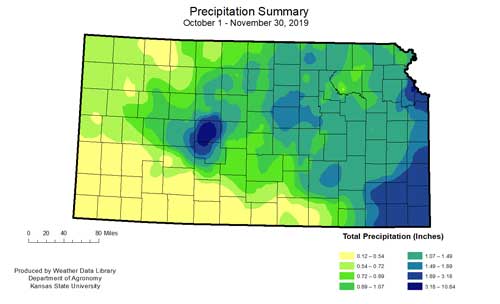 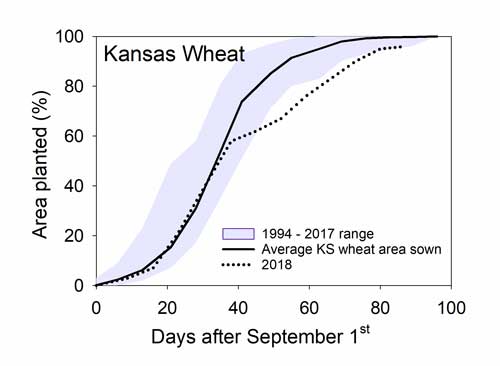 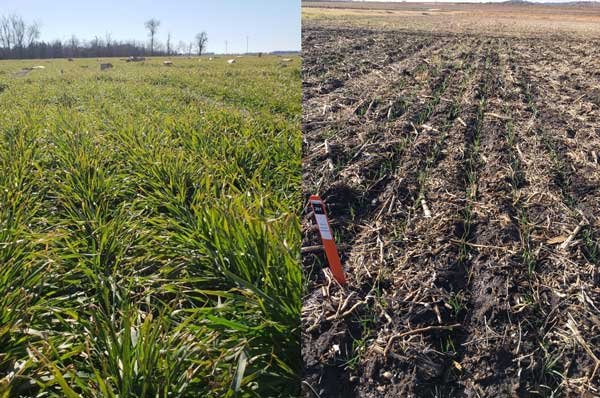 The remainder of the growing season was also cooler and wetter than average in central and eastern Kansas. From approximately April 1 until June 10, total precipitation ranged from 10.5 to 30.2 inches in the central corridor, which is excessive (Fig. 3, upper panel). Therefore, water-logging was a common theme during between boot and flowering stages of development (Fig. 3, middle panel). The amount of waterlogging in a given field depended on field slope and drainage capacity, but the majority of the fields in Sumner and Cowley counties had large drowned-out portions (Fig. 3, lower panel). The excessive moisture during the growing season might also have increased nitrogen (N) and sulfur losses via leaching and denitrification (in the case of N), rendering many fields in central Kansas N deficient. Typical symptoms included shortened pale green canopy with limited head size accompanied by contrasting cow pocks of higher fertility. During May, a few hail events brought localized damage and crop termination to some fields in south central Kansas. 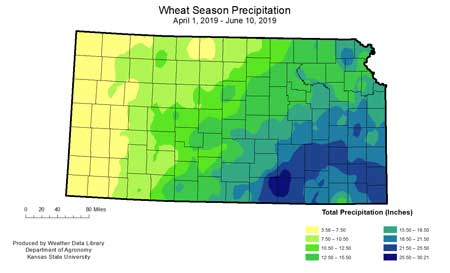 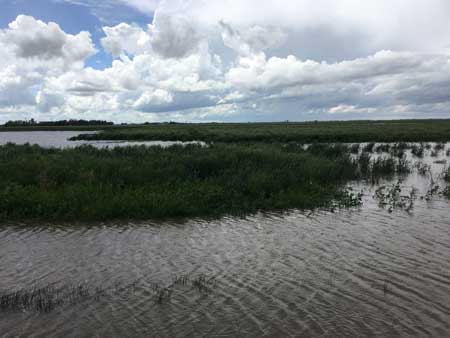 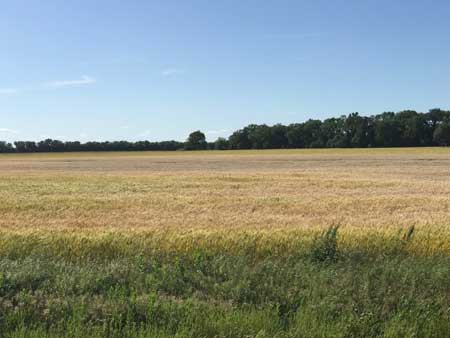 The combination of delayed sowing, excessive precipitation (more than 60 inches during the growing season for portions of south central Kansas), and below average temperatures led to a delayed harvest of about 14 days as compared to the long-term average. Likewise, excessive rainfall led to high field-to-field variability in the central portion of the state. It was not uncommon to hear reports of yields of about 60 bushels per acre and test weights of 62 pounds per bushel from one field (typically better drained, sandier soils), while a neighboring field from the same producer yielded 20 bushels per acre with 55 pounds per bushel test weight (flat fields with worse drainage capacity).

Overall, the western Kansas crop had a very favorable growing season. Sufficient rainfall during sowing time (ranging from 0.5 to ~2 inches between October and November) ensured a good stand establishment. For the most part, the western Kansas wheat crop was sown in a timely manner with the exception of some fields sown after corn, which were delayed due to rainfall during October. However, this represented a minority of the fields, especially when compared to the proportion of fields sown late in central Kansas. An early onset of cold temperatures in the fall avoided excessive fall growth and decreased the incidence of viral diseases that are transmitted by aphids or by the wheat curl mite, restricting wheat streak mosaic occurrence to isolated cases.

Winter precipitation in the form of snowfall was above average, as was spring rainfall in western Kansas, resulting in a full soil moisture profile. This portion of the state received anywhere from four to 13 inches of precipitation between April 1 and June 10, which ensured great grain filling conditions. These above average precipitation amounts also led to some visible symptoms of N deficiency in many fields in western Kansas, likely due to a mismatch between N positioning in the soil profile (leached down below the root zone due to above average precipitation), coupled to a decreased root system due to cooler temperatures. Many symptoms of N deficiency faded after slightly greater temperatures in May allowed for a better root development. Despite above average precipitation, the occurrence of stripe and leaf rusts was sporadic and, while observed at levels to ensure fungicide application in susceptible varieties, caused considerably less yield losses as compared to those observed in central Kansas. During June, a few hail events brought localized damage and crop termination to some fields in western Kansas. It is imperative that producers control their volunteer wheat in fields affected by hail, as the occurrence of volunteer wheat will be greater under these conditions.

Temperatures during the entire growing season were below average, which delayed crop development. Although a late-developing crop is typically more exposed to heat stress, temperatures during the grain fill period continued below average [May average temperatures: 60 degrees F (-3.3 F), and June average temperature: 72 degrees F (-0.9 F)], which led to longer grain filling period and increased overall yield. Many growers reported yields of 60-70 bushels per acre as opposed to their long-term average of 30-35 bushels per acre and, in many cases, yields greater than 100 bushels per acre were reported. This increased grain filling period, in combination with continuous rainfall events, delayed harvest in parts of the state, leading to one of the latest harvests in recent years.