The estimation of crop yields before harvest can be erratic, but producers often like to know about the potential yield of their crops. In previous K-State Agronomy eUpdates we discussed the calculation of the potential yield for soybean and corn. These articles are:

This article will discuss how to get simple but fairly good estimates of sorghum yield potential. Similarly to soybean crop, sorghum can also compensate for abiotic or biotic stresses through changes in head sizes (grain number and weight) and number of tillers.

Before going into the procedure to estimate sorghum yields, we need to understand the main plant components of sorghum yield. The main yield-driving forces are:

The number of plants and the number of tillers per plant are two of the main components, which are determined well before the end of the crop growing season. Those two yield components are influenced by the initial plant density, planting date, and the environment, among other factors.

Those who want to get right to the formula can skip to the next paragraph, but it will help to know how sorghum yield components develop. Increasing the number of plants per acre potentially increases competition for resources, which can diminish the plant’s capacity to produce tillers. In addition, the interaction of planting date with plant density can have a similar effect. As planting date is delayed, the capacity of the plant to produce tillers will be reduced; thus, plant population needs to be increased to compensate for the reduction in the number of tillers. Previous research at K-State showed sorghum produces more tillers when planted early (mid-to-late May) at lower plant populations as compared with late planting dates (mid-to-late June). The environment also plays an important role in the final number of heads per unit area. Heat and drought stress will reduce the plant’s ability to produce more tillers, and also could severely reduce the tiller survival rate. The total number of seeds per head will be determined within the one- or two-week period before flowering until milk to soft dough stages (approximately two to three weeks after flowering). Kernel size will be determined close to the end of the season. In the 15 to 25 days after flowering, during the soft dough stage, sorghum grains have already accumulated about 50% of the final dry mass. Thus, the period around flowering is critical for defining not only the final number of grains per head but also the potential maximum kernel size. Final seed weight will be determined when the grains reach physiological maturity (visualized as a “black-layer” near the seed base). From this time until harvest the grains will dry down from approximately 35% to 20% moisture content.

The interaction among all four components will determine the actual yield, but a wide range of variation can be expected in all these main yield driving forces (Figure 1). 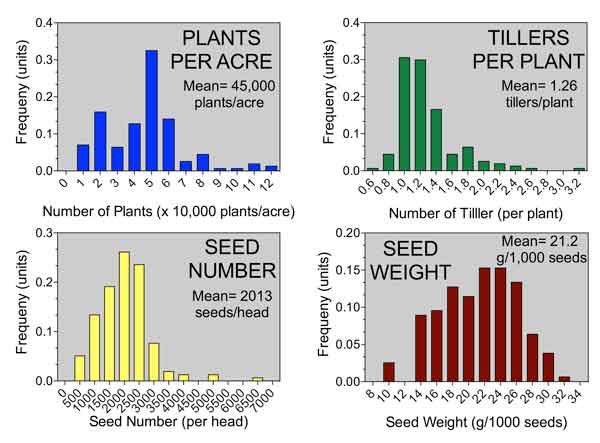 As the sorghum crop gets closer to full maturity, yield estimates will be more accurate because the kernel weight will be closer to being set. Nonetheless, we can start taking yield estimations three to four weeks after flowering (from soft to hard dough stages). At these stages, the final seed number can still change. In addition to the seed number, the seed weight will be only partially determined -- approximately 50 to 75% of dry mass accumulation as compared to the final weight.

Total number of seeds per head (2)

Pounds per bushel, or test weight, which for sorghum is 56 lbs/bushel (4)

The following steps should be taken for making sorghum yield estimates:

For this on-farm approach, start by counting the number of heads from a 17.4 foot length of row when the sorghum is in 30-inch rows. This sample area represents 1/1000th area of an acre. If the sorghum is in 15-inch rows, then the number of heads in 2 rows should be counted. For a 7.5-inch spacing, 4 rows will be measured. In each of these scenarios, the area counted will be equal to 1/1000th of an acre.

Head counts should be taken in several different areas of the field to properly account for the potential yield variability. If the proportion of smaller heads, less than 3 inches in height, is very low (less than 5%), these heads could be avoided due to the smaller proportion they will represent when determining the final yield.

Step 2 –Estimation of the Number of Seeds per Head:

The seed number is, by far, one of the most complicated yield components that need to be estimated. The total number of seeds per head can vary from 100 to 5,000 seeds per head (Figure 1), but almost ¾ of the seed number distribution is around 1,500 to 2,500 seeds per head. A previous report on sorghum yield estimation (Vogel, 1970), suggested as an alternative to estimate the number of nodes, and branches within nodes, for each sample of sorghum heads, and then to count the number of grains in a subsample of nodes and branches.

This approach is still very tedious. A simpler method of estimating the number grains per head would be very helpful. 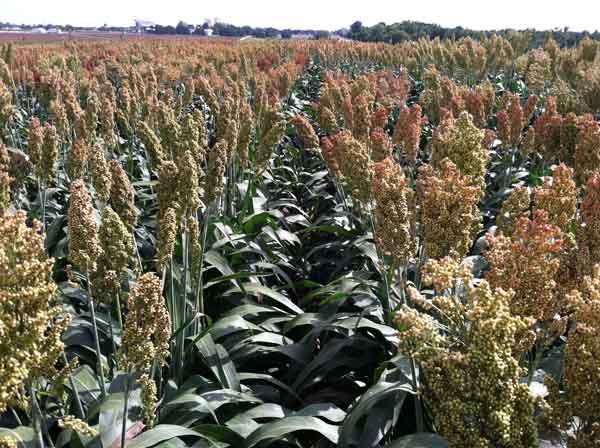 Figure 2. To estimate the total number of heads per acre, count the number of heads in a sample area  17.4 feet in length, for 30-inch row spacings. Photo by Ignacio Ciampitti, K-State Research and Extension. 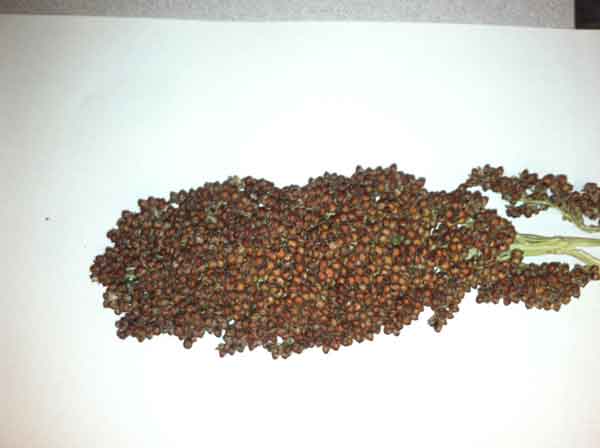 Figure 3. There is no easy shortcut yet for counting the number of seeds per head. Photo by Ignacio Ciampitti, K-State Research and Extension.

We are currently processing information from previous and current year, and the method for developing a quick estimation of the grain number will be available soon. The estimation is based on predicting the final head volume. Stay tuned for more details about this project in coming months!

Another quick method uses an estimate of seed counts per head based on determinations of general yield environment conditions. From previously published information from K-State (provided by K-State professors Richard Vanderlip, emeritus, and Kraig Roozeboom), we can utilize a very simple association between the yield level, conditions around pollination/grain set time, and the number of grains per heads (Figure 4). In their work, Vanderlip and Roozeboom counted the average number of seeds per head and average seed weight for different yield environments, after harvest.

We can use this relationship to give us a general idea of the kind of seed count per head we can expect based on the general yield environment, using primarily the environmental conditions during the period of first week before flowering to two to three weeks after flowering, when pollination and grain set are being determined. We can then use that estimated seed count per head, and multiply it by the number of heads per acre. The number of seeds per pounds, or seed weight, is also a factor we need to estimate, but the work by Vanderlip and Roozeboom found that to be much less of a factor in yield than seed count per head.

Figure 4. Relationship between grain yield and yield components, seeds per head (yellow points, left panel) and seed weight (red data points, right panel). The number of seeds per head has the most direct relationship with yield.

Step 3 –Estimation of the Seed Weight:

A similar procedure can be followed to estimate the seed weight (Table 1). For the seed weight component, the variation documented in the dataset showed a very narrow seed weight variation as compared with the variability found in the seed number component. In general, it seems that lower seed weight is expected at low yield ranges, but the difference among yield levels is negligible. Table 2 shows the conversion from average seed weight to seeds per pound, and from seeds per pound to the seed size factor employed in the examples below for sorghum yield estimation.

B. Poor to Fair Crop Condition:

Seed number is the main driving force of sorghum yield. On-farm estimations can be roughly based on environmental conditions during the week before and the two- to three-week period after flowering, which is the critical period of pollination and grain set. Actual seed counts per head would make the estimates much more accurate, but requires considerable time and effort. Future work will focus on getting more exact, rapid estimates of the number of seeds per head through the use of pragmatic and simple techniques, which will simplify the “on-farm approach” described in this article.