More than 80% of Kansas wheat should have been planted by this time of the year (Figure 1, week 43). However, some producers may have delayed planting for different reasons, including harvesting a summer crop during late October (Figure 2), or waiting for significant precipitation to occur. This last reason is particularly true for southwest Kansas, a portion of the state where no significant precipitation occurred in the last month or more. As a result, wheat planting in the state is slightly behind the 1994-2015 average for this time of year according to the USDA-NASS crop progress reports (Figure 3). 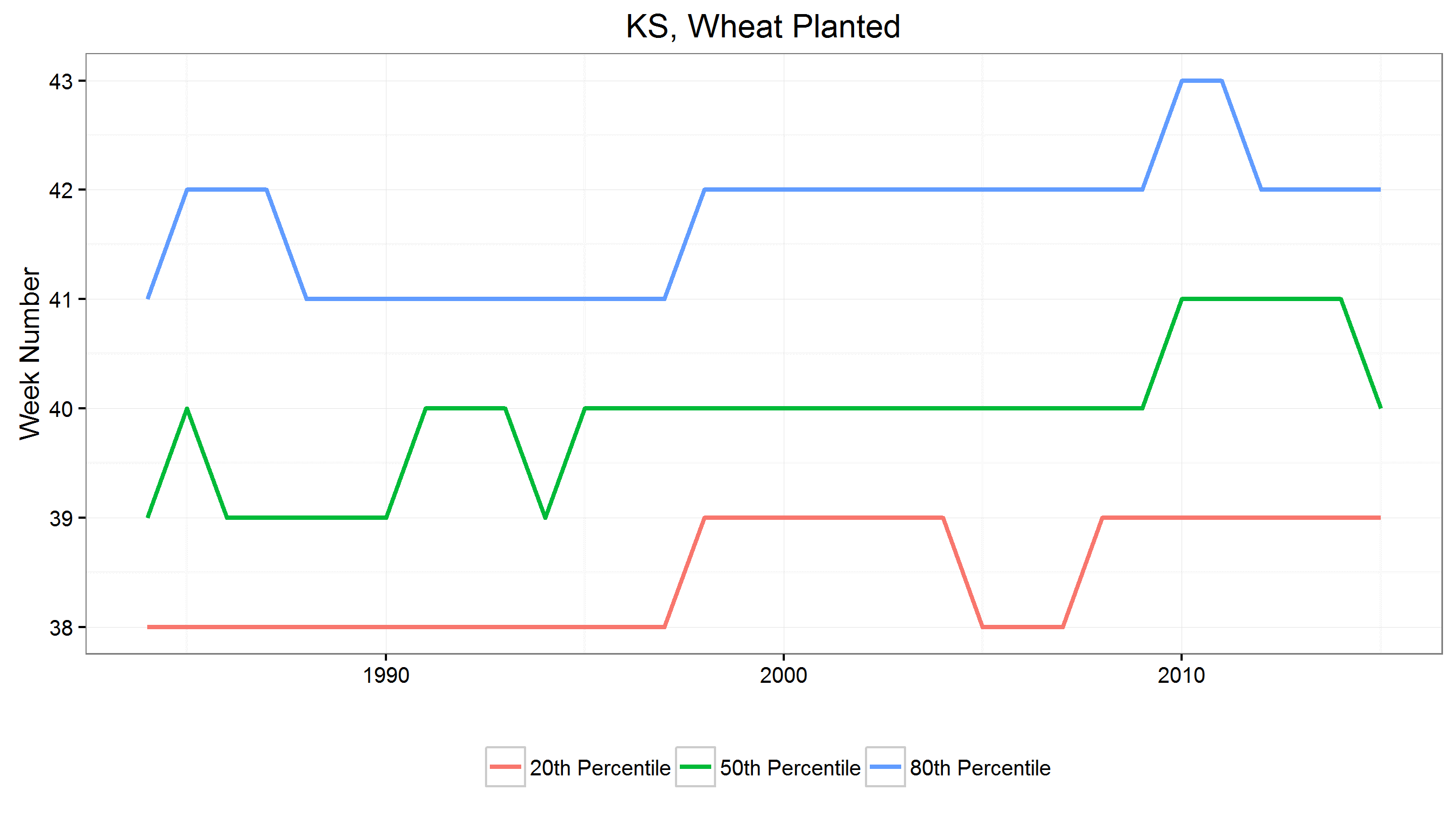 Figure 1. Five-year moving average of the week when wheat planting progress met the 20th, 50th, and 80th percentiles. Wheat planting progress has been relatively stable over the years, with a slight shift for later planting in the magnitude of approximately a week in recent years as compared to late 1980’s. The current week of Oct. 28 is week number 43, meaning that the 80th percentile of wheat area sown should have been achieved by the previous week. 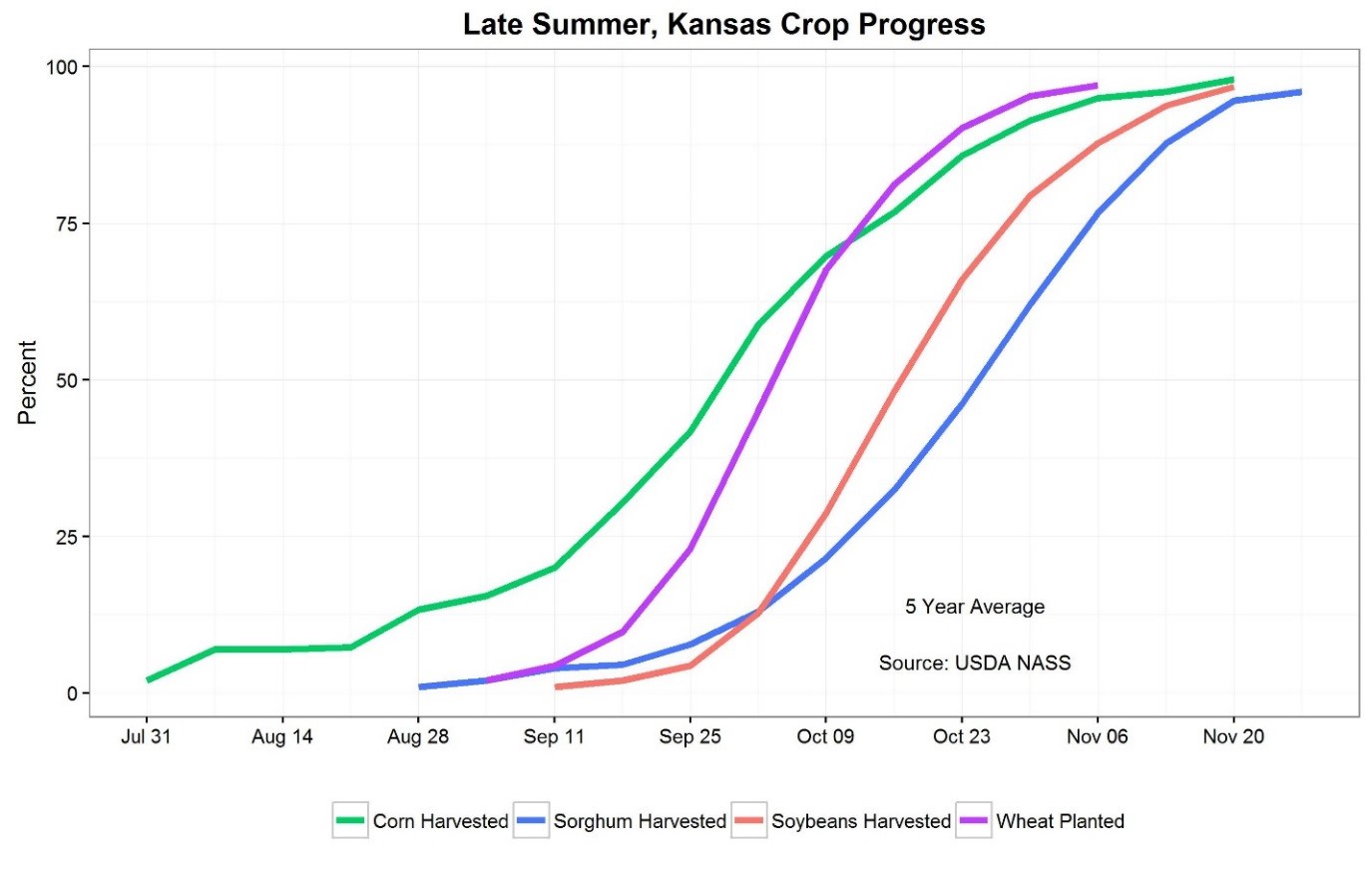 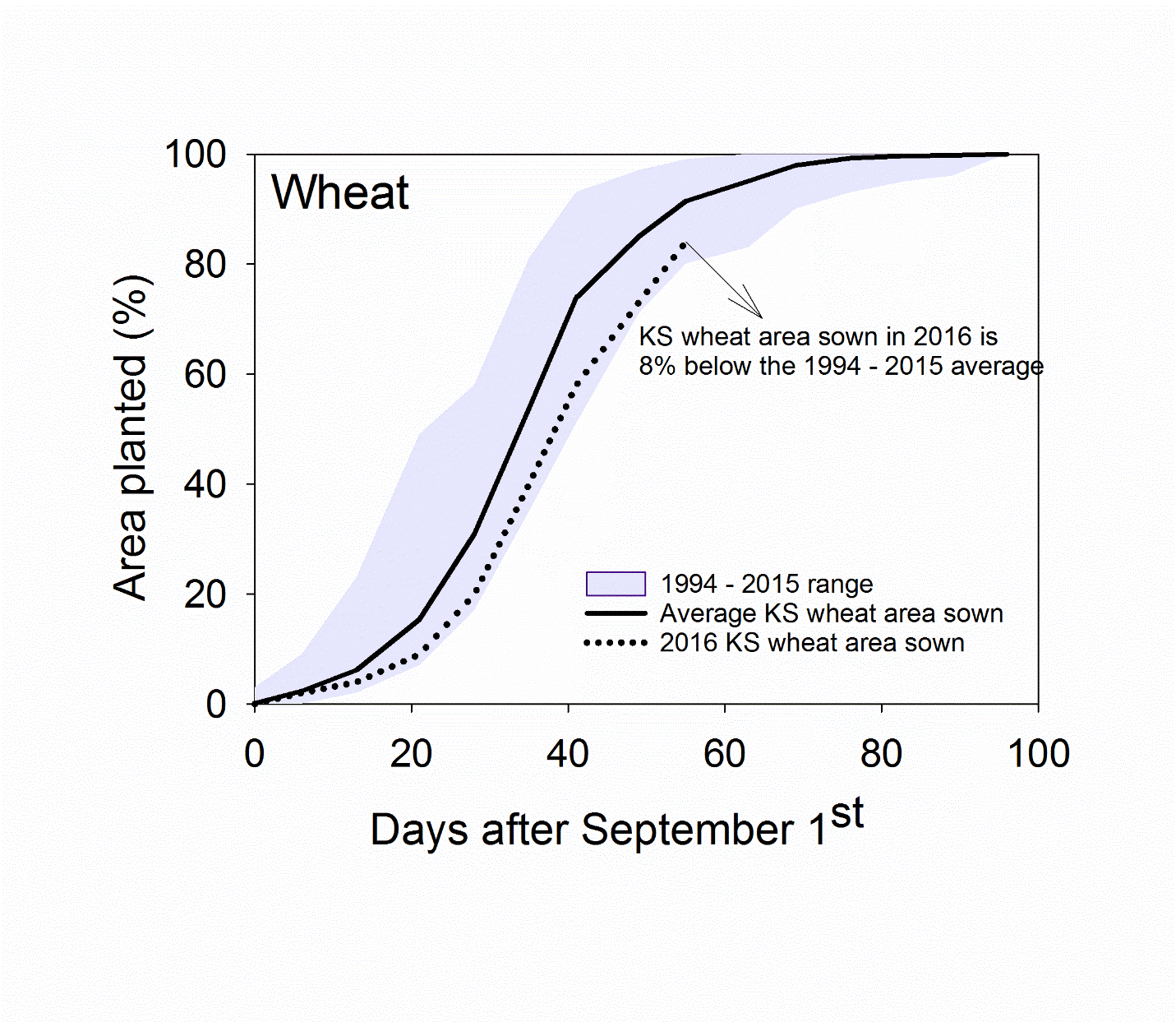 Figure 3. Wheat sowing progress in Kansas during 2016 as compared to the 1994 – 2016 average and range. Wheat area sown in the current year is slightly behind the long-term average, but still within the range observed in the period. Graph based on USDA-NASS crop report of progress as of Oct. 24, 2016. For updated versions of graphs presenting this information interactively, please visit: http://www.agmanager.info/machinery/crop-progress-charts#planting-progress

Planting wheat in early November is within the acceptable range in southeast and far south central Kansas. In other areas of the state, this is later than desirable, and later than the cutoff date for full crop insurance benefits. Although good yields may still be reached when wheat is planted outside the optimal planting window, late-planted wheat is often subjected to colder fall temperatures and has less time to tiller prior to winter dormancy, which can reduce wheat yield potential and increase the risks of winter injury. Under these circumstances, some management adjustments can be made to try to compensate for the consequences of late planting:

Late-planted wheat tends to produce fewer tillers during the fall than wheat planted at the optimal time. Fall tillers are generally more productive than spring tillers, contributing more to the crop’s yield potential. Therefore there is a need to compensate for the reduced tillering by increasing seeding rates and adding extra seed per row foot. Wheat seeding rates for Kansas vary depending on the precipitation zone, and increase from west to east (Table 1). Likewise, for every week planting is delayed from the end of the optimal planting date range, seeding rates should be increased by about 150,000 – 225,000 seeds per acre (or 10 to 15 lb/acre) in western Kansas, or 225,000 – 300,000 seeds per acre (15 – 20 lb/acre) in eastern Kansas. Final seeding rate should not be above 90 pounds per acre in western Kansas and 120 pounds in eastern and central Kansas for grain-only wheat production.

Table 1. Seeding rates for different Kansas regions when planted during optimum planting dates and in grain-only systems. Upwards adjustments to these rates are needed when planting wheat late.

Wheat needs at least 4-5 leaves and 1-2 tillers prior to winter dormancy for maximum cold tolerance. Late-planted wheat will most likely have fewer tillers and leaves than wheat planted at the optimal timing, and therefore will be more susceptible to winter kill. It is important to plant wheat at the normal planting depth (1 to 1.5 inches below the soil surface) to ensure good root development and anchorage, as well as good crown insulation by the soil during the winter, increasing the chances of winter survival. Shallow-planted wheat is at greater risk of winter injury. If the seed is placed too deeply, it may not have enough vigor in cold soils to emerge well.

Phosphate-based starter fertilizer promotes early-season wheat growth and tillering, which can help compensate for the delayed sowing date. Additionally, P is less available under colder soil temperatures, which can result in P deficiency under cold weather conditions. When planting late, producers should strongly consider using about 20-30 lbs/acre of P fertilizer directly with the seed, regardless of soil P levels. This placement method is more effective at that time of year than other application methods. The later the planting date, the more fall root development is slowed. The closer the fertilizer is to the seed, the sooner the plant roots can get to it.

It is probably too late to make any changes as far as which wheat variety to plant this fall. However, a few points to consider when it is known that wheat will be planted late (e.g. when planning to sow wheat following soybeans) are tillering ability and maturity. A variety that has good tillering ability may offset some of the consequences of late planting, as it might still be able to produce one or two tillers during the fall whereas a low-tillering variety may produce none. Also, late-planted wheat is typically behind in development going into the winter, which might translate into slower development in the spring. This delay can result in plants being exposed to moisture stress and especially heat stress during grain filling, reducing the duration of the grain filling period. Thus, selecting an early-maturity variety with good yield potential may offset to some extent the consequences of late planting by decreasing the chances of a grain filling period subjected to warmer temperatures.