Alfalfa weevil larvae usually cause serious defoliation of alfalfa in the spring if not treated in a timely manner. They are especially devastating to the first cutting, but can cause reduced quality and retard growth even after this first swathing. Because this spring weevil activity can be very intense in only a 3-6 week period, and because the weather is so unpredictable at this time of year, an alternative treatment strategy is being evaluated. This consists of spraying alfalfa in the fall.

Alfalfa weevil adults become active in alfalfa fields in the fall where they feed a little, mate, and start laying eggs in alfalfa stems. When the weather gets too adverse for this activity, they then become inactive in the leaf litter in the field, but anytime the temperatures get above about 45⁰ F throughout the winter, they become active to continue laying eggs until temperatures cool back down.

So, the idea of treating alfalfa in the fall to kill the weevils before they can lay eggs has intrigued many producers. Entomologists at Kansas State University, led by Alysha Soper, a Research Assistant, initiated studies in the fall of 2012 to determine if fall applications would significantly reduce spring infestations, and if so, when the fall application timing would be most effective. Most conventional synthetic-organic insecticides provide 2-3 weeks residual activity, and since this egg laying can start in mid-October, it is imperative to determine the most effective time to spray to reduce the weevils, but also to lessen the impact on non-target organisms.

These findings are preliminary, based on only one year, but are from large plots from six different fields (see Fig. 1). This research will be conducted again this fall and evaluated in the spring of 2014. As seen from Fig. 1, the third application date resulted in significantly less weevils in the spring samples. The fall applications were initiated starting two weeks after the first adult weevil was detected in the field (started Oct. 9 in 2012). So Fig. 1 illustrates the combined results from all six fields. Even though the third application date (Nov. 6, 2012) had significantly less alfalfa weevils per stem than the other application dates (except for the 4th application date as sampled on 12 April), the infestation levels were still high. Infestations of 1 larva/2 stems will result in considerable defoliation if not controlled. So, the statistical difference is significant, but the practical difference is less significant because insecticides will still need to be applied or serious defoliation will occur. 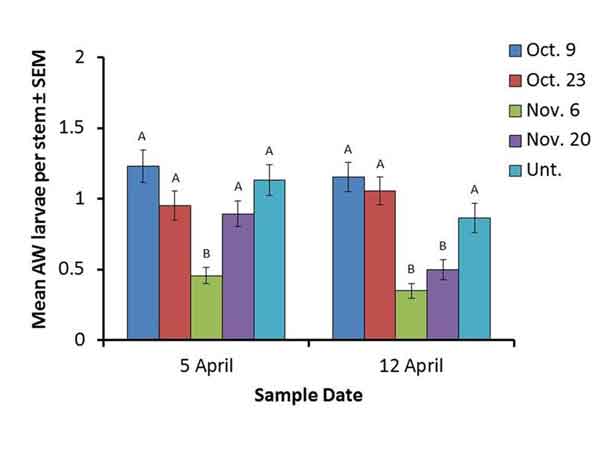