Factors to consider in winter survival of wheat

The official start of winter is still over a month away, but Kansas has already experienced winter-like weather this fall. The following are some of the factors to consider when evaluating the outlook for winter survival of wheat:

During the fall, winter wheat seedlings spend approximately the first month developing their first leaves, the crown, and a secondary root system. All the while, the seedlings are building and storing the energy needed to go through the cold acclimation process and survive the winter. Normally, seedlings will need a minimum of 4-5 leaves and one or two tillers to build up enough stored energy reserves to survive the winter. Ideally, the wheat plant would have 3 to 5 tillers prior to the onset of the winter. Seedlings will have a better chance of winter survival if their crowns are well developed, in firm soil, about one inch below the soil surface. 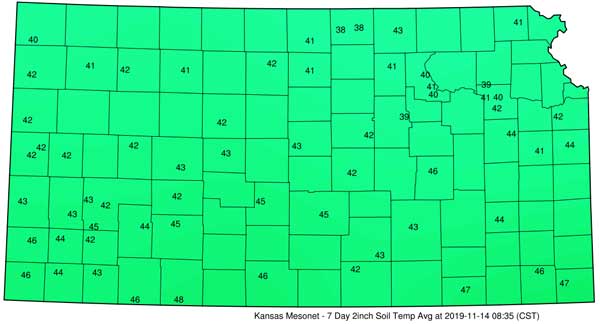 Figure 1. Average 2-inch soil temperature during the week of November 8 – 14, 2019. Temperatures for the majority of the state were below the 50 °F threshold needed to initiate the process of cold acclimation in winter wheat. Data and map by Kansas Mesonet. 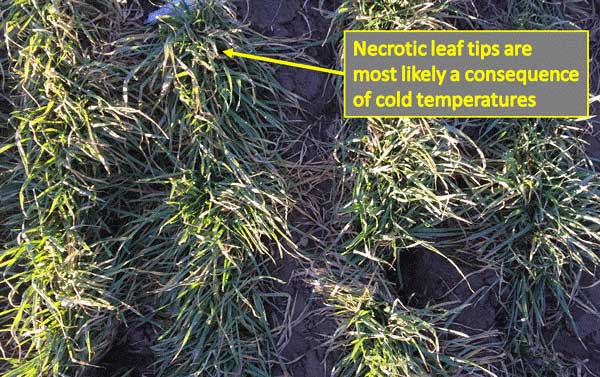 If soil temperatures at the crown depth rise to 50 oF or more for a prolonged period, there will be a gradual loss of cold hardiness, even in the middle of winter. The warmer the crown temperature during the winter, the more quickly the plants will start losing their maximum level of cold hardiness. Winter wheat can re-harden during the winter if it loses its full level of winter hardiness, but will not regain its maximum level of winter hardiness. 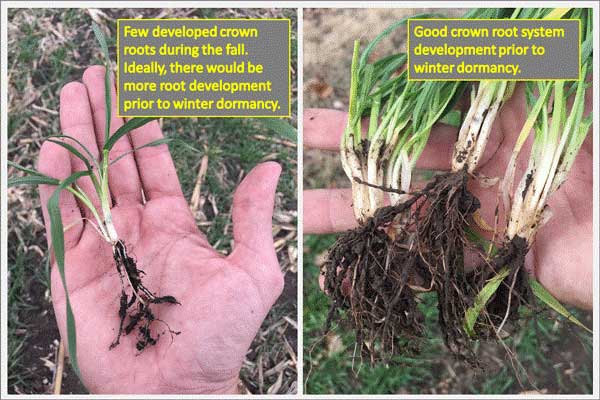 Soil temperatures at crown level depend on snow cover, moisture levels in the soil, and seedbed conditions. Winterkill is possible if soil temperatures at the crown level (about one-inch-deep if the wheat was planted at the correct depth) fall into the single digits. If there is at least an inch of snow on the ground, the wheat will be insulated and protected, and soil temperatures will usually remain above the critical level. In addition, if the soil has good moisture, it is possible that soil temperatures at the crown level will not reach the critical level even in the absence of snow cover. However, if the soil is dry and there is no snow cover, there may be the potential for winterkill, especially on exposed slopes or terrace tops, depending on the condition of the plants. During the 2019-20 growing season, most of the wheat growing region in the state has not received substantial precipitation for over 30 days (Figure 4), and the topsoil is possibly dry through central and western Kansas. Dry soils and loose seedbeds warm up and cool down much faster than moist or firm soils, contributing to winter injury. 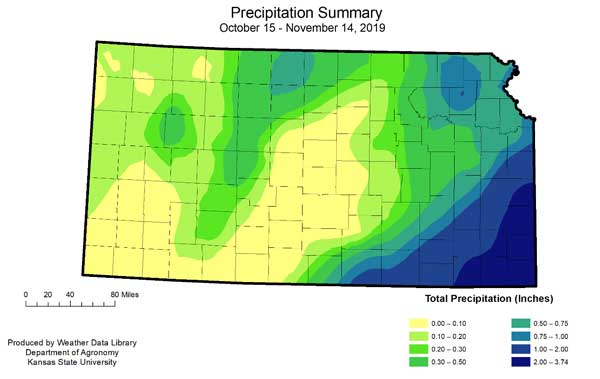 Figure 4. Cumulative precipitation from October 15 – November 14, 2019. While eastern Kansas received as much as 3.74 inches, the majority of central and western Kansas, where wheat is mostly grown, received less than 0.20 inches. Dry topsoil might result in greater exposure to winterkill, especially if the canopy is not well developed. Map and data from Kansas Mesonet.

Ideally wheat plants should have at least 1-2 tillers and 3-5 leaves, as well as a good crown root system development, when going into the winter. However, many Kansas wheat fields were sown relatively late during the 2019-20 growing season, and has faced below-average temperatures, which slowed down crop development. A fall with open field conditions, gradually falling soil temperatures, and little snow cover until freeze-up, will contribute to winter hardiness development by the wheat crop. During the winter, moist and firm soil, as well as at least an inch snow cover, will help buffer and insulate crown temperatures and increase the chances of winter survival.